Hazardous materials response has almost always been part of the fire and emergency services in one form or another in recent years.

Hazardous materials response has almost always been part of the fire and emergency services in one form or another in recent years. In the mid to late 1980s and into the 1990s, it gained much more attention as protecting the environment became more of a societal priority and most departments began learning more about haz-mat and the role the department would play in incidents. Since then, most departments have fire fighters maintaining their skills through regular training and refresher courses and of late have been working with regional response teams.

The events of 9/11 prompted another re-focus on haz-mat response with the added emphasis on CBRN. Emergency services saw the need to prepare for new and, in some cases much more dangerous, responses like bio-terror events. This brought more intense training to hone skills for the new threats. 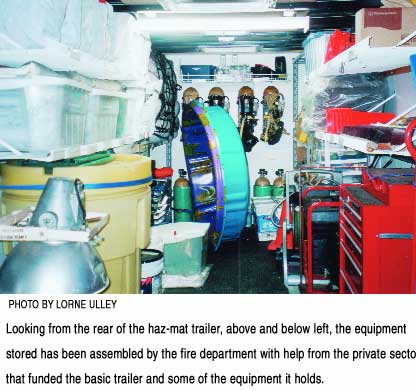 The Vaudreuil-Dorion (Que.) Fire Service, like most of its counterparts in communities of all sizes across Canada, has had dedicated haz-mat equipment in its inventory since 1977, which then was brought to an incident in a covered boat trailer. The need to upgrade equipment and gain quicker access to it was determined in 2000 after the department's critique of a major fire at a chemical plant (March 2001, Fire Fighting In Canada).

Director Harold Harvey and Chief of Operations Serge Leroux set out to enlist the private sector into their plans. First, they wanted to learn more about what hazards were to be found in industrial businesses in their coverage area and what would be required to handle emergency response to the commercial risks identified, then to work with industry in getting their haz-mat response equipment and training up to snuff.

An industrial committee was formed within the commercial operations, from the big players to the medium-sized businesses that also posed some significant risk. From this committee, funds were committed to finance a haz-mat trailer and some of the members also contributed equipment.

With the private sector on board with funding, the fire department would do the necessary work to ready the new trailer and equipment. The municipality agreed to finance the additional equipment needed to complete the unit's inventory. Eventually this would become a regional response unit along with one in the city of Valleyfield, who got the idea for their haz-mat unit from Vaudreuil-Dorion. This came about after some committee members met with their neighbouring counterparts for the first time and developed a mutual aid agreement, which included joint purchasing.

A four-wheel Cargo Express trailer was purchased, 21 feet in length, eight feet wide and eight feet high. It has a full rear tailgate and a right side door near the front of the trailer. Designed with an 8' by 6' command post area in the front portion, it is partitioned off from the rest of the unit, which holds the equipment.

The command post area was built with workstations for two. It contains a large magnetic white board on the rear wall with clear plastic sliding panels. Above the workstations is shelving for haz-mat reference material, radio, cellphone, five Talk-about T5200 radios and a laptop computer.

Stored in the rear section is an E-Z Up shelter, large tool box, traffic cones, a large quantity of absorbent spill pads, decon showers, four SCBAs and spare bottles, two water ponds for decontamination, folding chairs, windsock, red and yellow scene tape, a large plastic over-drum, large portable floodlight, sewer plugs, filter masks, boots, booms for spills on waterways, a generator and six pails each of Class A and B foam, along with other materials. On the outside right there is an awning running almost the full length of the unit, which is used by fire fighters as a rehab area.

Towed to incidents by the department's 3/4-ton pickup or one of its rescue units, the trailer is "at the ready" for calls from 18 departments who all have major risks including two railways, the Trans Canada Highway and Highway 20, both used heavily for trucking traffic.

The names of the businesses that contributed to getting the unit in service are painted on the back of the tailgate, on the outside. When in use this tailgate is opened and used as a ramp, with the names not shown – in the event of an incident, no adverse publicity is generated.

In service for the past two years, the haz-mat trailer certainly is doing the job it was designed for, and the department continues to look for ways to improve its efficiency. 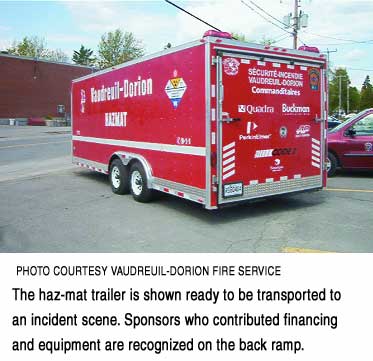