This article will hit home for those of us who provide service to a major road artery such as the Trans-Canada Highway. We all have SOPs in place for such events and while they may vary depending on the situation, the bottom line has always been to ensure fire fighters are in the safe zone while traffic is being routed through, either by police or by us.

This article will hit home for those of us who provide service to a major road artery such as the Trans-Canada Highway. We all have SOPs in place for such events and while they may vary depending on the situation, the bottom line has always been to ensure fire fighters are in the safe zone while traffic is being routed through, either by police or by us.

The Lancaster (Ont.) Fire Department under the direction of then-Fire Chief George Baker had its SOPs in place for response on Highway 401, the major route between the U.S. border at Windsor to the Quebec border. On any call for Highway 401, the department rolls two pumpers and a rescue unit. This would see the first-in pumper take the rear of the incident while the second pumper would handle the accident. The rescue would pull up to the scene with the needed equipment it carried. At the time of the MVA call, one pumper was out of service so the rescue was designated to take the rear of the incident scene.

Department responds to MVA
It was at 8:30 a.m. on Nov. 14, 2004, when the department was toned out for an accident on the 401. Information supplied by the dispatcher indicated there was a transport truck on fire, over on its side with the driver trapped in the cab. The call alerted fire, ambulance and police.

Responding with two rigs and a full crew, they received a radio call en route from a fire fighter already on the scene who reported there was no fire and the driver was out of the truck cab and appeared only to be shaken up.

The call now became a priority 2 (no fire). The rescue arrived and took its position at the rear of the incident while the pumper would move up in front, ready to pull a line if required. 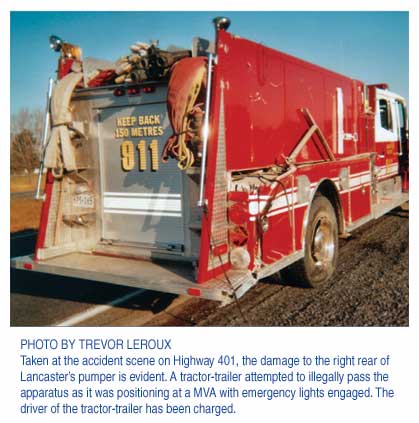 Hit on right side
As the pumper rolled to the front of the scene with all lights flashing, it was hit on the right rear side by what can only be described as an over-zealous truck driver, who apparently thought he could get by the accident before the road was closed. This was not the case. Two other private vehicles also tried this manoeuvre but did not strike any other vehicle.

The pumper was struck while it was travelling at approximately 40 km/h and the tractor-trailer was moving at about 80 km/h. The pumper suffered heavy damage and had to be towed back to the hall. Fire fighters on board were slightly injured but none seriously. They were eventually transported to the area hospital in Cornwall to be checked, then released.

During a typical accident such as the original call, the department would have wrapped up its on-scene job in about an hour or so. Due to the turn of events caused by the truck driver, however, there were 82.5 staff hours logged plus another 22 hours spent stripping the damaged apparatus and putting into service a loaned truck from the North Lancaster Fire Department.

The municipality’s insurance carrier had the damaged pumper evaluated at an independent garage locally and decided to have it repaired.

The driver of the rig that struck the Lancaster pumper has been charged with following too close to a fire apparatus and trying to pass when its emergency lights were operating.

As a footnote, due to the actions of the over-zealous driver, Highway 401 was closed for six hours.

The department
The Lancaster Fire Department is one of five in the South Glengarry, Ont. Lancaster has 30 paid-on-call fire fighters operating two pumpers and a rescue unit protecting a community of 2,500, and is located in eastern Ontario, about 15 kilometres from the Ontario-Quebec border.