A two-vehicle accident with injuries 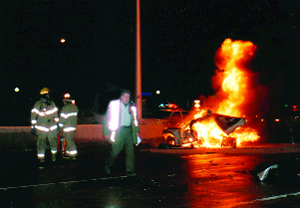 During rush hour traffic on the evening of Jan. 13, 2005, in the Borough of St. Laurent, Que., the Montreal Fire Service responded to a car accident with fire showing on Highway 40, the Trans Canada. It was 17:40 hrs.

PHOTO BY ELLIOT ALBERT
A car is engulfed in fire after being struck on the Trans Canada Highway in Montreal on Jan. 13, 2005. Firefighters on scene from Station 72’s ladder truck worked with portable extinguishers as a pumper was being put into operation. The trapped occupant died on scene.

First on scene was the ladder truck from Station 72. They reported it was a two-vehicle accident with injuries; one car was on fire and an occupant was trapped. The on-scene officer immediately requested ambulance and police to respond.

The ladder crew attempted to extinguish the car fire with portable fire extinguishers, as their apparatus was not a pump. The incoming pumper was delayed because of heavy traffic on this major artery during rush hour.

The female driver, aged 22, who was trapped succumbed to injuries on the scene. Two people in the second car were transported to hospital with non-life threatening injuries.

Investigation into the fatal accident determined the female driver was travelling in the centre lane of the three-lane highway when her vehicle stalled. While on her cell phone with the Sûreté Québec police, her car was hit from behind by another car causing her vehicle to spin around, hitting the concrete divider and bursting into flames. Passing motorists were unable to assist. The investigation is continuing.