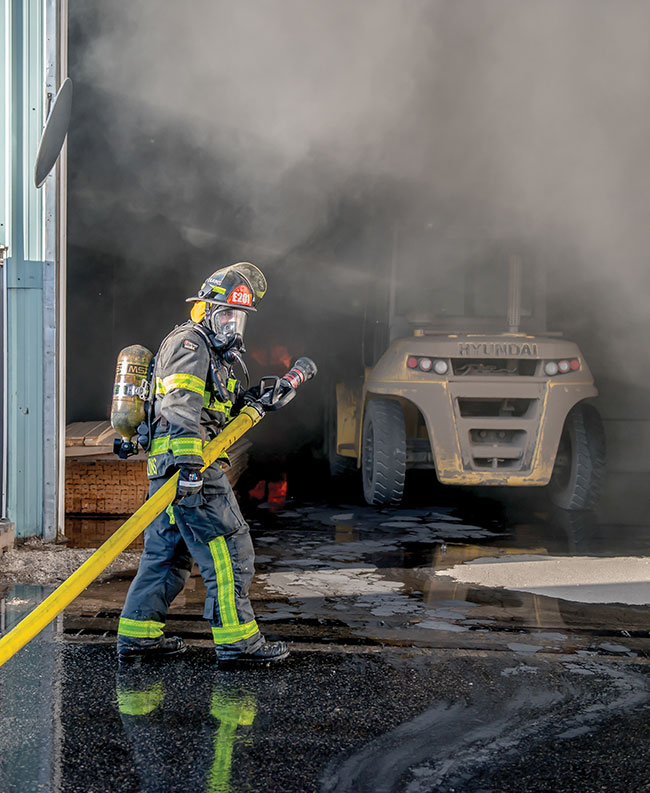 The Penticton Fire Department responded to a fire at the Greenwood Forest Products Mill that was started by a vehicle parked inside one of the main buildings. The sprinkler system was activated containing the fire to the area of origin until the fire service arrived. There was no major damage to property. Photo credit: Mike Biden

In 1918, a 356-page report titled “Fire Waste in Canada” was published by the Canadian Manufacturers’ Association to generate interest in and find a solution to the problem of fire waste in Canada. A review of this report – written by J. Grove Smith and presented to the Attorney General of Canada – reveals that despite many changes over the last century, many conclusions remain true.

By comparison, between 2011 and 2014, the population in Canada was 35.5 million (for this analysis, data was only available for six provinces representing a population of 25.6 million). While property value destroyed per year has increased 39 times over the past century to $855 million, there has been only a two-fold increase in structure fires (an average of 18,248 per year) along with a 63 per cent decline in the death rate (153 lives lost per year, or eight deaths per 1,000 fires).

This shows that, while property losses have increased exponentially as can be expected due to the improved standard of living over time, we have become much better at preventing fires and protecting lives.

In his book, Smith enumerated an elaborate plan designed to control fire waste.

He wrote: “Whatever their faults, it is essential that existing buildings should be adequately protected as they stand. The greater their defects and consequent hazard, the more urgent such protection becomes.”

Even where a building has been especially designed with a view to fire resistance, he said, active means of detection and extinction of fire should supplement the more passive structural qualities.

The addition of fire-extinguishing equipment would “guarantee immunity from fire,” Smith wrote.

Many of the points made by Smith a century ago, still apply today. Lack of proper facilities for controlling small fires, or neglect to use them when provided, is still responsible for most large and costly fires.

Even the best building construction and the most protective and efficient public protection should be reinforced by auxiliary appliances, Smith noted. In particular, in villages and rural districts lacking any organized form of public fire protection, it is essential that all buildings be reasonably equipped with means of dealing with fire. These protections would detect fire immediately as it occurs, provide a means whereby the occupants of buildings may cope with incipient fires, assist fire departments under circumstances where their effective operations may otherwise be limited and prevent panic and possible loss of life in crowded buildings.

The principal protective devices proposed by Smith in order of their relative importance and value are as follows:

■ Automatic Sprinkler Protection
The statistics of the time showed that most fires were discovered by building occupants and passersby. However, Smith wrote, this form of detection is unreliable during the night, when business and industrial premises are vacated and passersby infrequent.

Hence, he highlighted the importance of some device which, independent of human assistance, will promptly discover and control a fire at its point of origin. Of all the devices designed for fire detection, Smith said, the automatic sprinkler alone meets these fundamental requirements.

“It is on duty twenty-four hours a day and 365 days a year. The automatic sprinkler has revolutionized the science of firefighting and has been the main factor in bringing about the control of fire hazard,” he wrote.

In 1917, the “record shows that of 18,795 fires, 12,194 or 64.8 per cent were extinguished and 5,750 or 30.6 per cent satisfactorily controlled by sprinklers. Only 851, or 4.5 per cent of the total number, could be termed unsatisfactory and these were largely due to human interference.” In other words, sprinkler protection showed an average efficiency of over 95 per cent under all conditions of service.

“The records of the Boston Manufacturers’ Mutual Fire Insurance Company show that since the beginning of the factory mutual system in 1835, there have been but 35 lives lost in factory fires, 23 of these being in an unsprinklered mill in 1874, before the automatic sprinkler was available for protection. Of the remaining 12 (all occurring since 1874), three were killed by going back into a building to save personal effects at a fire in 1907, and four were men of public fire departments killed in the performance of their duty. This leaves only five who were not able to evacuate themselves, in a period of 39 years to date.”

Records of the automatic sprinkler as a safeguard of human life are not, however, confined to factory buildings. Smith noted that Fire Commissioner Robert Adamson testified that no life has ever been lost in New York City in a sprinklered building of any class. 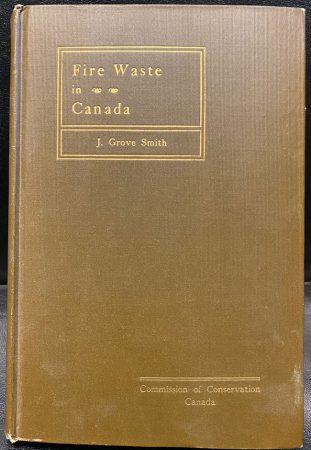 In 1918, a 356-page report was published by the Canadian Manufacturers’ Association in response to the problem of fire waste. A review of this report – seen here – shows that many of its conclusions remain true. J. Grove Smith presented this report to the Attorney General of Canada.

■ The Fire Environment Today
Many co-relations with Smith’s work 100 years ago are reflected in a study published in March 2019 by the University of the Fraser Valley in British Columbia titled “Fire Protection System(s) Performance in the Residential Building Environment: Examining the Relationship between Civilian and Firefighter Injuries: A Retrospective Evaluation of Residential and Residential Apartment Fires, 2005 to 2015” by Len Garis, Arpreet Singh and Darryl Plecas.

In all, 439,256 fire incidents are analyzed with a focus on key characteristics of structural fire incidents (e.g., fire spread and fire department intervention) as well as fire-related casualties (i.e., deaths and persons injured) resulting from those incidents.

A total of 1,736 fire-related deaths (10 among firefighters) and 12,682 persons injured (3,308 among firefighters) were reported over the 10 years under review. A total of 129,901 fire incidents classified as “residential use” were examined by overall frequencies of fires, injuries, deaths, frequency the fire department was reported to have extinguished the fire and the frequency the fire spread beyond the room of origin by the fire protection systems performance. There were 1,418 fire-related deaths (two were firefighters) and 8,919 persons injured (1,956 were firefighters) reported over the period. Only one-third of these residential fires had a functioning life safety system.

In keeping with Smith’s conclusions, this study demonstrates that sprinkler protection systems in combination with smoke alarms in buildings create the best chances for civilian and firefighter survival when a fire occurs. It further shows that when an injury does occur, it tends to be less serious in buildings with appropriate alarms and suppression mechanisms.

Residential sprinkler systems are designed to automatically discharge to either extinguish fires or to mitigate them with a view to giving building occupants time to escape. These systems, which have been available for over a century, have been developed to a point where they are able to react within 35 seconds of a fire starting. Essentially, analysis on the data suggests:

In both residential dwellings and apartments with sprinkler systems and smoke alarms installed and functioning, civilian and firefighter injuries were reduced dramatically. Measured by length of hospitalization or days off, the severity of injuries observed were also far less serious.

These results have considerable implications for future developments. One policy implication is that incorporating sprinklers into newly constructed single-family dwellings would likely be highly cost-effective regarding fire incidents and casualties.

The addition of sprinklers with detection in all buildings would result in less than three lives lost per 1,000 fires – equating to 120 lives that could be saved each year. It is time to heed the call for government intervention that Smith made 100 years ago.

Editor’s note: Thank you to photographer Mike Biden for contributing this edition’s cover and accompanying inside image. For over 30 years, Mike has been living and photographing life on the edge. He is the official photographer for the Penticton fire department.

Len Garis: Fire Chief (ret) for the City of Surrey, British Columbia, Associate Scientist Emeritus for the BC Injury Research and Prevention Unit, an Adjunct Professor in the School of Criminology and Criminal Justice & Associate to the Centre for Social Research at the University of the Fraser Valley (UFV), a member of the Affiliated Research Faculty at John Jay College of Criminal Justice in New York, and a faculty member of the Institute of Canadian Urban Research Studies at Simon Fraser University. Contact him at len.garis@ufv.ca.