Even though sunny skies were not much in evidence on Saturday, Aug. 13... 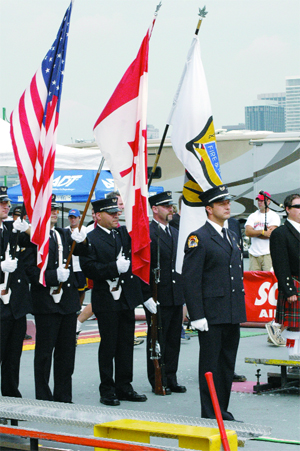 Even though sunny skies were not much in evidence on Saturday, Aug. 13, the Windsor firefighter combat challenge teams were certainly shining. The City of Windsor Fire & Rescue Services hosted a regional qualifying event for the Scott Firefighter Combat Challenge during the city’s annual Firefest, a two-day extravaganza on the riverfront Aug. 12 and 13, with proceeds raised for the Hospice of Windsor and Essex County as well as the Easter Seal Society. With live bands, face-painting for the kids, a safety village and many static displays, it was a weekend of fun for all.

Windsor’s Guard of Honour stands ready during the opening ceremonies of Firefest 2005.

The combat challenge event drew huge crowds of spectators and teams from across Canada and the northeastern United States. The crowds feasted on fund-raising dinners and enjoyed the fun of watching local celebrities compete in their own challenge relays and listened to live music from local performers. The only downside to event was the rain, which soaked the course and made it slippery for the competitors.

Windsor’s two-time world and four-time defending Canadian relay champions – Team Tregaskiss – did not let the crowds down, winning all of their heats and earning a berth at the Canadian national championships, held in Edmonton in September (see story, page 27). They will also compete at the world championships, slated for November in Deerfield Beach, Florida. The team consists of Jack Bailey, Darren Hillman, Rob Fawcett, Jim Marusic, Greg Kotsis, Bob Bailey and Laureano Cordeiro.

In the Men’s Division, Windsor’s Darren Hillman topped all competitors with a time of 1:24.14. Teammate Jack Bailey took second with a time of 1:27.07 and Guelph’s Steve MacCulloch took the bronze medal, with a time of 1:29.03.
In the Women’s Division, Jana Chvatal from Toronto took first with Wendy Krebsz of Markdale in second and Daina Leroux of Streetsboro, third.  Don Kempf of Cleveland took home top honours in the Over 50 Division with Dave Cusack of Lyons-Muir coming second and Dave Kadwell of Burlington placing third.

In the Over 40 Division, long-time competitor Bret Yundt of West Lafayette laid down a 1:38.18 taking the gold, perennial favourite Randy Kalan was second at 1:42.24 and John Blackburn of Pearson Airport was third at 1:46.64.
Michael Breutigam is a retired firefighter and a freelance photographer.