June 24, 2016, Vancouver - Many fire departments have a diversity agenda, but few have an outreach team to help encourage diverse communities to join fire services. What can those who are not decision makers do to further diversity in our departments? How about getting a group of your fire pals together, and creating a firefighting camp for teenage girls?

That is exactly what a group of female firefighters from the Metro Vancouver area did in 2011. Modeled after a similar program in New York state, Camp Ignite is an annual four-day/three-night camp in the Metro Vancouver area for teenage girls of all cultures. Now in its sixth year, Camp Ignite is organized by a volunteer committee of female firefighters and delivered in partnership with several fire departments as a co-operative instruction venture between volunteer mentors and fire department duty crews.

Up to 20 teenage girls complete the program annually. Participants develop new skills such as CPR and fire-extinguisher training, and, through participating in challenging fire-training scenarios, surpass their personal expectations, explore where they thought their boundaries were, and have the opportunity to surpass them. The young women climb a 100-foot aerial ladder, rappel down the outside of a building, ride a fire truck and take a hydrant, don a full hazmat suit, use auto-extrication tools on a wrecked car, as well search a smoke house, locate and rescue a victim. Completing those tasks can help boost a young woman's self esteem, and it's something they will never forget.

For the fire-department mentors, the opportunity to influence and support these young women is beyond fulfilling. To hear a young woman say that she can do anything she wants to do in this world fills a mentor with pride and helps keep the flame of passion for community service flowing. Many of these young women complete camp and want to be firefighters – how could they not!

Camp Ignite not only provides young women with opportunities to empower themselves, but they have fun, make new friends, and learn from strong female role models.
"Over the years I have had the privilege of receiving the guidance and mentorship from many men and women across the fire service," said former peer mentor Ashley Lewis. "Programs such as the Vancouver Fire and Rescue Services Youth Academy and Camp Ignite have allowed me to meet and learn from the men and women that have been my inspiration while pursuing a career in the fire service. I will be forever grateful for all the guidance I have received and aspire to be as great as the men and women who have inspired me."

Fire departments involved with Camp Ignite can participate by sponsoring a camper, hosting the event, and promoting their department to young women who may be interested in pursuing a career in fire fighting. A hosting department may have up to 30 young women and female firefighters on site participating in firefighting activities.

To date Camp Ignite has been hosted by 10 different municipalities in the Vancouver area with two new fire departments hosting in 2016 – Mission Fire/Rescue Service and Langley Township Fire Department. A live-fire training day is offered in conjunction with the Justice Institute of BC Fire & Safety Division at the Maple Ridge campus. The camp offers no shortage of opportunities to cultivate cultural growth in the fire service and showcase men and women working together successfully.

Each year the number of firefighting camps for young women taking place throughout North America grows. In 2013, Camp Ignite hosted a firefighter from Cal Fire – California's Department of Forestry and Fire Protection – who was interested in organizing a program in her state. Camp Cinder is now in its third year in California. In 2015, a team from Spokane, Wash., visited Camp Ignite to look into starting a camp in the region. More and more people in the fire service recognize camps as an effective way to give back and be proactive in a diversity initiative.

Camp Ignite provides a venue that encourages more women to explore the fire service as a career choice, whether it is directly through participation, through conversations about the camp with family, friends and relatives, or as a result of raising the profile of women and men successfully working together in the fire service.

Will this grassroots initiative result in an organic increase in recruitment? Time will tell, but the young women who participate in Camp Ignite are moving into the fire services. Camp Ignite's first campers are getting serious about careers and a number of them are now volunteer firefighters, or are following a path to become first responders. Some former campers are exploring other male-dominated careers. A 2011 peer mentor, who is currently working as a volunteer firefighter, is in the final stages of the hiring process with a large career department – she will be the first participant of Camp Ignite to realize a position as a full-time firefighter.

Twenty campers may not sound like a large number, but it is significant, especially in a province that currently has about 80 female full-time firefighters. Camp Ignite is successful, and the results are making a difference, yet it is just one solution in a path to a diverse fire service. More importantly, Camp Ignite is a solution brought to you by the members of the fire service who are on the front lines supporting communities each and every day. 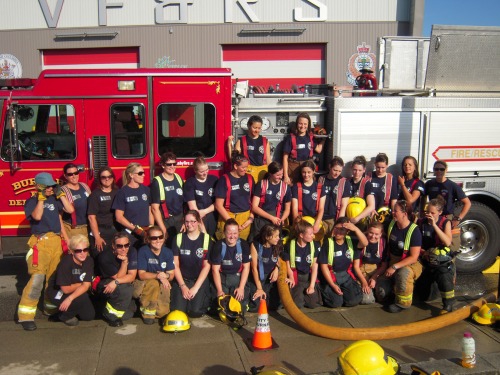 Camp Ignite in British Columbia hosts up to 20 girls each year to learn about fire services.
Print this page