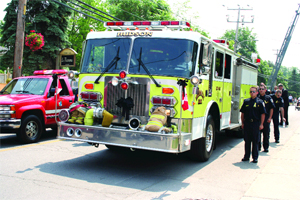 The Hudson, Que., Fire Department lost one of their firefighters during a training exercise. James Ratcliffe, 20, a volunteer firefighter, died Monday, June 6, following a tragic accident during marine rescue training on the Lake of Two Mountains. This was the first line-of-duty death for the small community of 5,000 people, located west of Montreal.

PHOTO BY JOSEPH GLOVER
Firefighter Ratcliffe’s remains are carried on the Hudson pumper, acting as the funeral caisson during the procession on June 11.

A media release from the Town of Hudson reported that, according to investigators, it appears the firefighter fell from a boat during an exercise and hit his head on the boat’s motor. He was transported to the hospital where he was declared dead. An investigation is ongoing.

Ratcliffe graduated from Hudson High in June 2002. He became a firefighter in October 2003 and was pursuing a Bachelor of Arts degree in Ottawa, under scholarship. He had recently returned home for the summer and resumed his volunteer firefighting duties.

In its first 18 months of operation, this rescue boat has performed six successful rescue missions on the Lake of Two Mountains.

Ratcliffe is survived by his parents, Peter and Diane, and his sister Jessica.

At the civic funeral held on the hot, humid Saturday, June 11, fellow firefighters came from as far as British Columbia to mourn. Over 1,000 firefighters were reported in the line of march with the funeral procession, led by two Hudson fire apparatus – one carrying flowers, the other Ratcliffe’s coffin – to the church. A large Canadian flag was suspended over the town’s main street from the ladders of aerial trucks from Ile-Perrot and Rigaud fire services.
Hudson Fire Chief Peter Milot speaking during the funeral srevice said that Firefighter Ratcliffe was still a part of his team but had been promoted, to “full-time guardian angel in charge of the town and its firefighters.”

Donations in Ratcliffe’s memory may be made in the name of the Hudson Firefighters Association.