Finding a career that pays the bills and fulfills your passion at the same time can prove difficult. Mykhail Baehr has managed to combine two; fire fighting and photography. 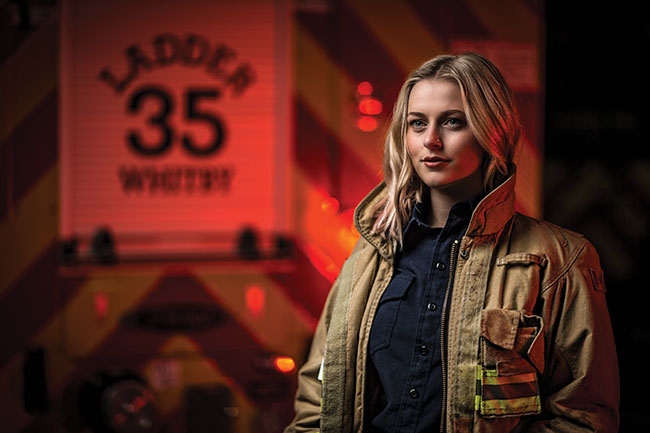 Jacqueline Mowat of Whitby Fire & Emergency Services Firefighter and photographer Mykhail Baehr has found a career that pays the bills and fulfills his passion at the same time. Cover story by Jayson Koblun/Picture by Mykhail Baehr

Baehr, or “Bear” as he prefers, was born and raised in Toronto. He serves on the Toronto Fire Services team and calls himself an amateur photographer. Bear started a project that he refers to as his Firefighter Portrait Series. On his own time, this firefighter/photographer visits fire halls and departments, shooting individual portraits of crew members and group shots of those willing to participate in the project.

“One of my favourite parts of the project so far has been seeing the character that it pulls out of an individual when I’m working with them. Everyone has a different story to tell and their own unique experiences within the fire service and I’m trying to get that across on camera.”

Bear says the look on a firefighter’s face is very telling about that individual and you can almost get a feel for what they have gone through in their life and career.

“I love seeing how different life experiences translate into a portrait. You don’t quite know what you’re going to get. Sometimes I look at the roll afterwards and I think, “Man, it looks like this guy has fought the beast several times in his life.’”

Bear takes the firefighter’s comfort to heart and does what he can to gauge his or her comfort level in different poses. He wants to make sure the firefighter is coming across as natural as possible.

“I take a few photos of them smiling, then not smiling, then facing the left and then the right. I really try to allow the firefighter to just be themselves,” he says. “Some people look artificial when they’re smiling and some people just look way more authentic and themselves when they aren’t. Some have this natural smirk or smile that’s just a part of their story – some don’t. Some firefighters come across as stoic, battle-scarred soldiers and that represents them well. Whatever tells their story best is what I want to capture.”

The project started about a year and a half ago. One of Bear’s department chiefs, who knew he was into photography, asked him to take portrait shots of another firefighter who was retiring as a retirement gift. The chief and retiree were good friends and the chief wanted to give the retiree a gift to remember.

“The first portraits I shot were of a firefighter who was retiring after working in the industry for more than 30 years. From there, the project really began to grow and take off as people really liked how the first portraits turned out,” says Bear.

The Firefighter Portrait Series is not Bear’s first photography gig. He has shot firefighter calendars before and has played with lifestyle and wildlife shoots. Over time, Bear developed a skill for using different lighting techniques that create the perfect environment and mood for his fire hall settings.

“I started playing around with different types of lights and found I was creating a really cool effect on the firefighters I was shooting. So, I became a lot more curious and confident and creative in the project and been having a lot of fun with it.

“I’m purposefully trying to make you not focus on the background. I want you to notice and care for the firefighter right off the bat. I try to have the background and environment just gently lit so it’s a part of the photo, but not the first impression. So, I keep it dim for that reason. I like dark and mysterious, heavy shadows and dramatic lighting. I use a lot of red because that’s often the colour at an emergency scene and it is relatable and memorable to the service.”

Bear says the idea behind the project is to showcase the men and women of the fire service. Career, volunteer, chief, it doesn’t matter.

He says the project started with the Toronto department because he already knew it well. But he has branched out more and more lately, shooting portraits and crews in Whitby, Ont., and other places in southern Ontario.

“I’m starting to get requests from departments farther away now and I am really excited about that. I want to do more departments in Ontario and I even hope to take this project to other provinces and the U.S. eventually. Right now, I’m getting the project out there and hoping more firefighters and departments show interest.”

Gathering interest doesn’t seem to be a problem for Bear and he credits a lot of that to his influence on social media, specifically Instagram, a photo- and video-sharing social networking service that works best on mobile devices.

“Instagram is giving me a lot of exposure. I think Instagram is great for this portrait series because the service is all about photos and images. Not much room for words or links. It’s a community of people who use it to mostly look at photos. It’s perfect for what I’m doing. A lot of firefighters and departments follow me online and like my photos. Or, they message me through the app and we start talking. If they’re interested then they ask me out to their department for a shoot.”

Bear didn’t start the portrait project for the money. He hopes he can take what he is passionate about and create something unique for the fire service to be proud of.

While Bear does portraits for the love of the art, he does sell various packages that departments can purchase. His packages include portraits, shots of the department, the hall, trucks, individual firefighter gear and larger-scale planned and developed shoots. The easiest place to reach him or check out his packages is to follow him on Instagram by searching his social media handle: @myschabear.

As a long-term goal, Bear says he isn’t sure what he wants to do with the project but does know he wants to see it in some form of print.

“A short-term goal of mine is to take the portrait series farther than just near and around Toronto. But long-term, I was thinking, ‘What am I going to do with these photos?’ I wasn’t sure how to get the material out in a meaningful way and I was thinking I should turn it into a coffee table book.”

Bear sees the coffee table book simply including the photos.

“No names, no descriptions, just great photography that tells its own story of the faces behind the fire service. Can’t say for sure how it might look yet, or if that’s even the medium I would decide to go with, but it’s something I’ve thought about for sure.”