The Ontario government recognized two firefighters and three police officers for bravery during a ceremony held Feb. 2 at Queen’s Park.

The Ontario government recognized two firefighters and three police officers for bravery during a ceremony held Feb. 2 at Queen’s Park.

James K. Bartleman, Lieutenant Governor of Ontario, was joined by Community Safety and Correctional Services Minister Monte Kwinter to present the medals. These medals are the province’s highest honour in recognition of firefighters and police officers whose actions demonstrate outstanding courage and bravery in the line of duty.
“The heroic actions of firefighters and police officers remind us of the risks they face every day,” said Bartleman. “We owe them our gratitude and our thanks for all they do to keep us safe.”

The recipients of the 2005 Ontario Medal for Firefighter Bravery are Capt. Ralph Noble of the Mississauga Fire and Emergency Services, and Lieut. Mark Smith of the Sarnia Fire Rescue Services.

On Dec. 21, 2004, Capt. Ralph Noble was walking his dog in a park area near Lake Ontario when he heard a faint cry for help. He saw a woman in the water about 35 metres from the shore. Noble caught the attention of a bystander and asked her to call 9-1-1. He then took off his jacket, unleashed his dog and entered the icy waters to rescue the woman by throwing the leash toward her. Despite the victim’s advanced stage of hypothermia, she held on to the leash and Noble pulled her in, saving her life.

An independent body of citizens representing all regions of Ontario determine medal recipients. A total of 163 Ontario Medals for Firefighter Bravery have been awarded since 1976.

(No information was able to be released regarding Lieut. Smith’s award, under the right to privacy laws.) 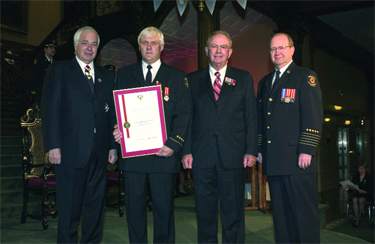 PHOTO BY TESSA BUCHAN
Standing on the steps of the grand staircase in the legislature building at Queen’s Park after the recognition ceremony are, from left: James Bartleman, Lieutenant-Governor of Ontario; recipient Capt. Ralph Noble, Mississauga Fire and Emergency Services; Minister of Community Safety and Correctional Services Monte Kwinter; and Fire Chief Garry Morden, Mississauga Fire and Emergency Services.