Headlines News
Firefighters save homes, but lose their own

May 10, 2016, Edmonton - When several firefighters learned their own homes had burned to the ground in Fort McMurray, they didn't drop their hoses and take time to grieve.

Nick Waddington, president of the Fort McMurray firefighters union, says the crew members instead continued to face the scorching heat and licking flames that all but destroyed some neighbourhoods in the northern Alberta oilsands capital.

''It didn't stop them. It didn't slow them down,'' Waddington said Monday.

''We had one guy stand at the end of his driveway, watch his house burn to the ground and then put in another 18 hours.''

Waddington couldn't confirm the number of firefighters who lost their homes to the wildfire, but said an estimate circulating on social media of two dozen was ''not off base.''

There are 179 crew in the department – 160 of them have worked tirelessly to battle the blaze since it spread into the city last Tuesday, he said.

More than 80,000 residents had to flee when the city issued a mandatory evacuation order. About 2,400 buildings were lost, but 25,000 were saved.

One firefighter did have a positive moment.

''After seeing the wreckage of our destroyed house, there was one thing to be happy about,'' Scott Germain posted on Facebook.

Germain pulled a safe from the rubble, pried it open and pulled out a gun that was stored inside. His wife had bought the gun for him, he said, and engraved a quote from their wedding on it, along with some quotes from his father and grandfather. He had wanted to keep it safe so he could pass it on to his own children someday.

''While this gun won't be shooting anything, I am beyond words that we were able to get it,'' Germain wrote.

Following a tour of devastated neighbourhoods Monday, fire chief Darby Allen spoke about a firefighter who showed ''heroism'' after failing to save his own home from the flames.

''He didn't drop his nozzle,'' Allen said. ''He moved to his neighbour's house and continued to fight that fire. And he fought that fire for a further 22 hours before he just couldn't stand anymore.''

The deputy fire chief of a rural volunteer crew in the nearby hamlet of Saprae Creek suffered a different personal loss. His 15-year-old daughter and a nephew died last week when their SUV collided with a tractor trailer a day after the evacuation.

A relative said firefighters did all they could to save their home – and the girl's treasured belongings inside – some sacrificing their own houses in the process.

Waddington said city firefighters barely slept during the first few days of the blaze and just recently started getting some days off to reunite with their families in other communities.

He was to travel Tuesday to see his wife and three children at a relative's home in Legal, north of Edmonton. It will have been a week since he last saw them.

Other firefighters who posted photos and updates on social media also said they were happy to finally be seeing their loved ones. 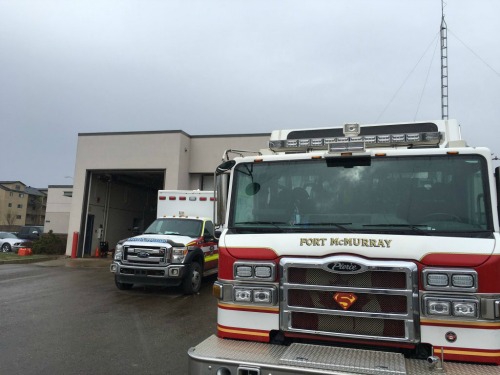 Several of the 179 crew members of the Fort McMurray Fire Department lost their homes in the wildfire.
Print this page