Sept. 28, 2015, Toronto – For three years, Deputy Chief Dave Lane has helped hundreds of firefighters from Ontario and beyond partake in high quality, specialized training – for free.

"It's become a huge success," Lane said. "After the first year, once we were able to pull that off with everybody's support and help, it's just grown from there."

All courses were free for participants because of sponsorship from M&L Supply, Scott Safety, Fort Garry Fire Trucks and Canadian Safety Equipment.

FESTI, which is located next to Toronto Pearson International Airport, has 48,000 square metres of training area that includes aircraft training mock-ups, an auto-extrication area, rescue tower and burn building; every section of the grounds seemed to be crawling with activity as firefighters broke out into their courses.
"There's some quality training here and a good variety with medical skills, IMS and fire fighting skills," Lane said.

The ARFF program, aircraft rescue fire fighting, which is lead by Capt. Dan Beaudoin, is one of the big draws for firefighters from smaller municipalities, Lane said.

"A lot of municipal fire departments are responsible for smaller airfields but they don't really have any background in aircraft rescue fire fighting," he said. "So that's been a really big success."

Eight firefighters chose to forgo the sunshine and instead sat in on the classroom session introduction to incident management systems, lead by Ontario Association of Fire Chiefs program manager Brad Bigrigg. The session included a discussion of recommendations from the inquiry into the Elliot Lake mall collapse.

Back outside, patient packaging and triage instructor Capt. Theresa Marinier trained participants using realistic scenarios, including a motorcycle crash and a mass-casualty incident; both were played out by volunteers from FESTI's pre-service classes.

The quality of the trainers, some of whom volunteer their time, are what make Firefighter Training Day the success that it is, Lane said.

"People realize that if the quality is not there, it's not something that they're going to come back to, and we've had people coming back for [three] years now," he said.

Find photos of Firefighter Training Day 2015 on our Facebook page. 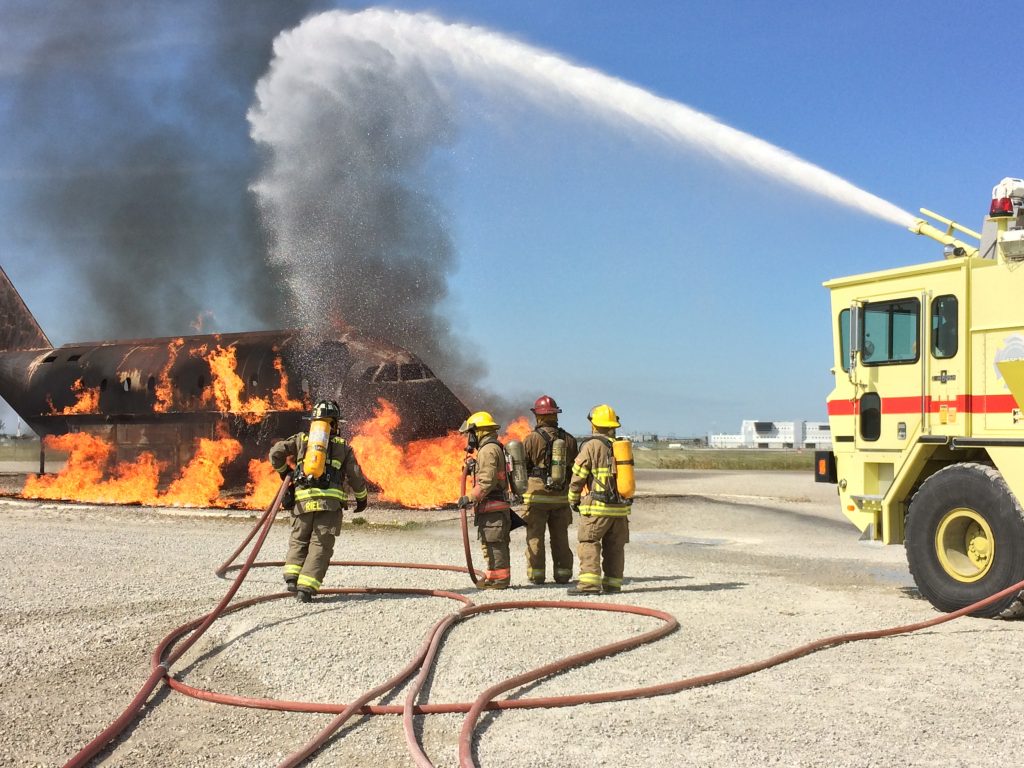 Aircraft rescue fire fighting is one of six courses that was offered at the 2015 Firefighter Training Day held at Toronto's Fire and Emergency Services Training Institute.
Print this page