Unattended pot was cause of apartment building fire 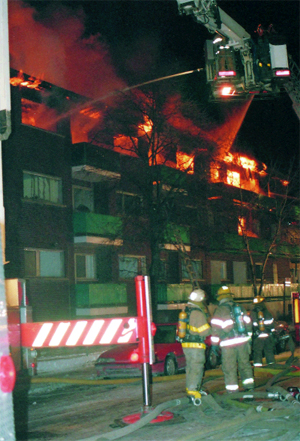 Just one kilometre from  a reported apartment building fire, Montreal’s Station 42 was first on the scene, after a call to the 9-1-1 dispatch centre at 17:01 hours last Dec. 17. Station 42 is in the Ahuntsic-Cartierville borough of the city.

PHOTO BY ELLIOT ALBERT
A platform can be seen in operation during the fire, hitting the upper third floor, which was gutted in this holiday incident.

Arriving on scene at 17:06, the officer in command, Capt. Roland Gauthier, transmitted a 10:07 code at 17:08, indicating he had a working fire. He informed dispatch that there was smoke showing from the basement of the three-storey structure. The apartment building with 20 units was constructed of wood and brick with a flat tar and gravel roof.  It was attached to a similarly-sized building.

Search conducted
Search and rescue was the prime concern at first. Due to the time of day, many of the apartments were vacant as people were at their workplace, but many were occupied and these residents were found and led out. Due to the number of apartments to be searched, a request for more personnel was made by command. As the evacuation of the building was proceeding, lines were being laid and ladders placed in position. Several 1-3/4" attack lines were charged and crews began an interior attack in the basement level.

Fire takes hold in walls
The size-up was for smoke and flames now showing. There was a serious fire in a basement apartment with fire taking hold in the walls. Attack crews, who had moved into the upper floor above the fire, reported that they had vertical fire extension. As a result, at 17:13 hours, a 10:12, a second alarm, was requested.

The interior attack was still in full operation, along with roof ventilation being carried out by ladder crews, who were finding smoke but no apparent fire extension. Crews now working all floors were reporting that there was now heavy fire extension up the pipe chases in the building.

Fire spreads into roof
In rapid order, at 17:33 and 17:34, codes for a third and a fourth alarm were transmitted. Fire was now into the roof and spreading across to the semi-detached exposures at the upper level of this structure. Interior crews were being told by command that there was total involvement in the top floor and the second floor had fire showing in several apartments.

Master streams employed
Once each of the interior teams completed their suppression operations they moved outside to an exterior mode as more master streams from ladders were placed into operation. More ladder companies were being deployed along with platforms. During these operations at 17:48 hours, the fifth alarm was struck, code 10:15.
The suppression efforts from the ladder and platform streams continued until the major portion of the fire on the top floor and the roof was brought under control so that crews could re-enter the safe areas of the structure to get at the remaining hot spots. At 21:37, the 10:08 code for “under control” was transmitted. It would not be until 05:50 hours the next morning that the “all out” code, 10:10, would be given.

Investigation
The investigation into this major blaze found that the fire originated in the lower level apartment unit due to food being left on a stove unattended while the occupant left the unit for the day. This accounted for the fire being able to get such a hold in the walls and travel up the pipe chases in the building. Firefighters were successful in evacuating all occupants in the early minutes after arrival.

There were no injuries to firefighters reported.

Department profile
The Service Sêcuritê Incendie de Montrêal under the overall command of Director Serge Tremblay protects an amalgamated population of 3.4 million in 4,000 square kilometres from 65 stations, plus one seasonal station on the former Expo site, with approximately 2,000 firefighters. The Ahuntsic-Cartierville borough has four stations with 27 firefighters and one operations chief on shift.