Equipment
Vancouver manages its fleet for the future

How does a big-city fire department stay ahead of the curve in a community committed to reducing environmental impacts, while meeting public expectations and keeping costs down? 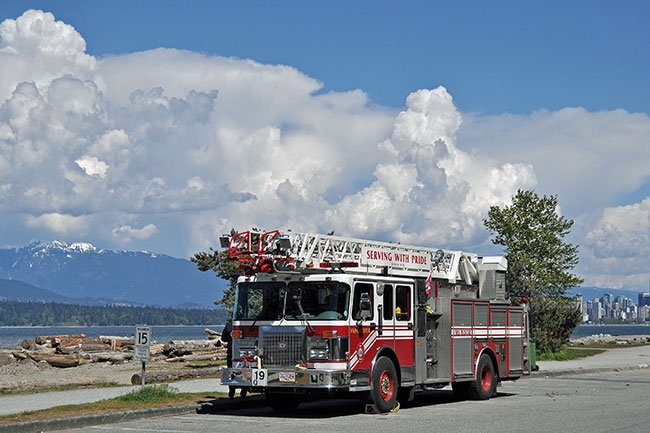 Vancouver Fire and Rescue Services has restructured its fleet to comply with the city’s environmental and financial goals and is phasing out the quints How does a big-city fire department stay ahead of the curve while meeting public expectations and keeping costs down? Paul Dixon explores the history of Vancouver's fleet and how it has evolved to meet community needs.

The answer, according to Capt. Jonathan Gormick, public information officer for Vancouver Fire and Rescue Services (VFRS), is a bit of a contradiction: going big, and going small – at the same time. Essentially, VRFS has rebalanced its service-delivery model and the apparatuses in service to more adequately serve the city today but also meet future demands.

Change has been constant at VFRS for more 130 years, as the city has evolved from a small clearing on the shore of Burrard Inlet to a modern metropolis and Canada’s economic gateway to Asia and the Pacific.

The first fire brigade was formed on May 28, 1886, six weeks after the city was formally incorporated. Sixteen days later, the small band of volunteers faced a raging fire wildfire that destroyed the entire town site, armed with nothing more than buckets, hand tools and good intentions. The rebuilding process began the next day. The fire brigade’s first engine arrived that first summer, and within two years had been joined by two more engines as the department grew to three halls.

John Howe Carlisle, one of the original volunteers, became chief, serving almost 40 years in the position until his retirement in 1928. The young city rebuilt and expanded at a rapid pace. New fire halls were built and trucks were purchased. By 1899, the volunteers had been replaced by full-time firefighters, who were paid the princely sum of $15 a month.

Through the Depression, Vancouver grew to its current size as it absorbed Point Grey and South Vancouver. By now, Vancouver had established a busy port served by two national railways and a local economy driven by forestry, fisheries and resource exploitation. Shipbuilding facilities, sawmills and other heavy industries lined the shore of the harbour, False Creek and much of the Fraser River. Wood construction was the rule and fires were a fact of life. As the 1970s dawned, the increasing value of Vancouver real estate was starting to push heavy industry from the downtown core out to the suburbs. Vancouver retired its first fire boat, the J.H. Carlisle, which had protected the sawmills and shipyards of False Creek in favour of four “super pumpers,” the largest-volume fire engines in Canada at the time, which were stationed in the high-value areas. At the same time, Vancouver acquired a 125-foot Calavar Firebird elevating platform, the first in Canada, which would be joined by a second Firebird and a Bronto Skylift.

The next big push for development came from Vancouver’s bid for Expo 86, the world’s fair that took over lands on the north shore of False Creek that had previously been occupied by the CP Rail maintenance facilities, warehouses, sawmills and other heavy industry. After Expo, the site was sold to developers who created scores of highrise residential towers, while the blocks of old warehouses abutting the site were turned into upmarket lofts and chic restaurants.

Moving through the 1980s and into the ’90s, Vancouver faced the same challenges as other big city fire departments: stricter building codes, improved building techniques, and the decline in the use of coal, wood and sawdust for heating resulted in dramatic drop in actual fire calls, while at the same time there was huge increase in the role of firefighters as medical first responders – something the public began to expect. Vancouver had established its first “inhalator squad” in 1930 and by the 1980s ran two rescue and safety units in addition to its standard engines and ladder companies.

In the early 1990s, the city and the department starting looking at a better way of doing business, or as Capt. Gormick describes it, “exploring the idea of sending the right apparatus to the call.”

“Was sending a full-sized fire engine or aerial to every medical call the best way of doing business when you consider the use of fuel along with wear and tear on the apparatus?”

VFRS opted to go with smaller rescue trucks primarily for medical calls, but it brought quints into the fleet; by 1998-99 many halls that previously had an engine and an aerial now had a quint and a rescue. The rescues had originally been envisioned for firefighters performing light firefighting duties and were outfitted with PTO pumps and small, on-board water supplies, but once the rescues were in service the decision was made to limit them strictly to rescue and medical responses. With the quints it was a matter of not quite enough: with 1500-gpm pumps, 150 gallons of onboard water, and 75-foot aerials, the quints simply could not be all things at once.

“They don’t have the on-board water supply or hose of an engine,” Gormick said. “And their aerial doesn’t have the reach of a bigger ladder. They were OK, but not great.”

Planning for the 2010 Winter Olympics was the next turning point for VFRS; it gave the department the opportunity to revisit the notion of sending the most appropriate apparatus to the call, but this time VFRS introduced small medical-response units to save the heavier trucks for what they were designed to do. The term “cross staffing” was introduced to the VFRS lexicon, as outlined by Fire Chief John McKearney in a report to council.

and replacing them with full-sized aerials.

Vancouver’s Hall 2, located in the heart of the Downtown Eastside, had 7,592 responses in 2016, of which 6,076 were medical calls. With a medic unit, an engine and a quint in Hall 2, the cross over is between the medic and the quint.

In 2014, Vancouver announced another large purchase of Smeal apparatuses, through Safetek Emergency Vehicles, including nine engines, five rescue engines and 10 32-metre aerials, with the result that all front-line VFRS apparatus will be Smeal. Smeal’s anti-idle technology promises to significantly reduce fuel consumption and emissions, which dovetails with the City’s green manifesto. Delivery started in 2016 and will be complete by the end of  2017. All front-line apparatus will be practically identical, with two-stage pumps and compressed air foam systems (CAFS). Trucks from the Olympic purchase have a slightly lower pumping capacity than the 2,250-gpm rating of the latest vehicles.

The decision to go with two-stage pumps on all trucks addresses multiple challenges. With no room to grow outward, the city’s buildings keep getting taller, creating the need to pump more water at higher pressures. Residential buildings in the downtown core are exceeding 60 storeys. The number of fires may have decreased, but the nature of building design, construction techniques and materials has changed the nature of fires.

Gormick points out that the rise in low-density, synthetic building materials has increased fire loads, and the growing use of laminated beams and composite flooring materials. In 2009, the British Columbia Building Code was changed to raise the limit on wood construction to six storeys from four. The University of BC has taken wood construction a step further, breaking ground in 2015 for an 18-storey student residence built almost completely of wood.

Increasing the pumping capacity of the trucks also compliments the city’s post-earthquake response, which is dependent on the Dedicated Fire Protection System that delivers salt water through a separate mains system that rings downtown and the south shore of False Creek.

The term rescue engine is new to VFRS. The five rescue engines entering service are standard, with a full complement of heavy rescue tools, including Sky Train lift equipment. As the quints are withdrawn from service and replaced by full-sized aerials, more of the crossover medical response pickup truck units will be put in service. The medical units can run with two or three personnel, versus four on the full-sized engines and aerials. The medic unit is first out on all medical calls, and if a second call comes in, the engine goes; the system does not eliminate the use of large equipment on medical calls, but it greatly reduce it.

The increase in opioid overdoses has created a spike in medical responses, and the addition of Naloxone to the scope of care created another training challenge.

“It happened very quickly” Gormick says, “when the government realized this was a crisis. This was something that got rolled out very quickly from the initial approval in February and training over 800 personnel in a span of six months.”

The pressure on municipal governments is intense to meet public expectations in delivering services while struggling to maintain control of finances. Vancouver’s decision to go with a standardized line of trucks and the smaller medical-response units will improve response times on medical calls, save on fuel, and cause less wear and tear on full-sized apparatus, which will reduce maintenance costs and potentially increase the in-service life of the trucks.

1 Comment » for Vancouver manages its fleet for the future