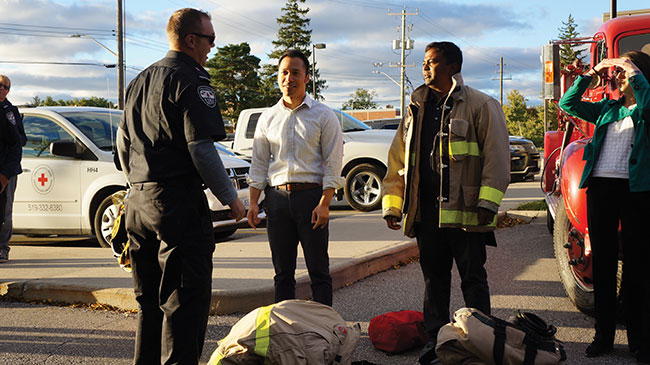 A Petrolia and North Enniskillen firefighter with Dr. Lincoln Lam and Dr. Enoch Daniel at a barbecue held to launch a collaborative wellness initiative. PHOTO BY Dawson Currie

When Jay Arns became chief of Petrolia and North Enniskillen Fire Department in Ontario, he said he was determined to focus on health and wellness initiatives for the volunteer firefighters. He’d worked in a fire department in a large city and had seen the benefits that such initiatives brought to full-time firefighters.

“I wanted to take care of our most important asset – our people,” said Arns.

His team approached Central Lambton Family Health Team (FHT), located in Petrolia, and met with executive director Sarah Milner. She and her team welcomed the opportunity to collaborate.

“We quickly realized that most of the department’s firefighters were already our patients – although some didn’t see their doctor very often,” Milner said.

The initiative was launched with a barbecue attended by firefighters, their families and members of the family health team. The fire department brought all of its trucks and fire gear. It was all part of an effort to help each group understand the perspective of the other and begin building relationships. It was also useful in generating positive community exposure. The firefighters and family health team are respected in Petrolia and it is a source of community pride that they look out for each other and the town itself.

Milner said there was some initial hesitancy on the part of some firefighters.

“There may have been a concern that we were going to find a reason they couldn’t continue as a firefighter.”

However, Arns said the work establishing trust paid off.

“Everyone understands we’re doing this so that they can continue doing this work as long as possible, and have peace of mind that they will be there for their families too.”

Arns wasn’t able to find a standard wellness program for volunteer fire departments, so he and Deputy Chief Brian Clark had to create their own. The starting point was the Wellness Fitness Initiative from the International Association of Firefighters, which was adapted with input from the FHT.

They discussed matters such as chest x-rays, which are required for full-time firefighters. As members of the volunteer department are engaged in fire fighting activities less frequently, the two partners engaged in discussions over the risks and benefits to arrive at timing they felt was best for their team.

One of the fire chief’s first concerns was to get adequate baselines of the firefighters’ health, key to tracking changes in health, and especially important considering the elevated health risks the firefighters face. Of related concern, physical exams were not taking place on a regular basis.

Today, Central Lambton FHT’s health promoter maintains a schedule for annual physicals and will proactively call firefighters in when needed. Vaccinations are up-to-date, as well as annual flu shots.

Arns noted that most firefighters spend only five per cent of their working time in fire suppression. Some of their time is spent responding to medical emergencies and it’s vital that they remain protected and not expose community members to additional infections. At the same time, they are exposed to bodily fluids, so additional vaccinations are recommended. To make it easier to get everyone vaccinated, onsite clinics have been held, as well as information sessions.

FHT staff hold regular educational sessions at the fire hall, addressing health and wellness issues for the department members, as well as those they may encounter in the community. As the opioid epidemic reaches into rural Canada, FHT members have educated members about recognizing and treating opioid overdoses they may encounter.

The FHT’s electronic patient record now notes those patients who are volunteer firefighters, important information for a primary care provider when an individual presents with certain symptoms like a cough, which may not cause concern for a member of the public, but in a volunteer firefighter may suggest follow-up is needed.

The program has already identified two members with hypertension. They have received treatment and, as a result, are able to remain on active duty. The outcome might have been different without early detection and treatment.

Another key component of the program is the rehabilitation taking place on-scene during training and incidents. Information is collected and placed in the firefighter’s file with the FHT to help establish baseline health indicators.

As mental health is increasingly recognized as an issue for first responders, Central Lambton FHT has given on-site information sessions on the topic. Meeting with members of the FHT more regularly and establishing trust has allowed some firefighters to start conversations about mental-health concerns, which may or may not stem from work-related stresses or experiences.

When a work-related crisis occurs, Arns said his department is proactive, bringing in a critical incident team to debrief and support those involved.

The two organizations are pleased with the collaboration and its success.

“If I had written down what my imagined best-case scenario would be, this has exceeded it,” said Arns. “I’m actually surprised at the ease with which it has occurred.”

Both partners have been open to suggestions and ideas. Arns said the two teams have a lot in common. They are committed to helping people and share the mindset of preferring to emphasize education and prevention over responding to a crisis.

Milner credits success of the program to the consistent and explicit messaging from Petrolia and North Enniskillen Fire Department’s leaders that health and wellness is important.

Both Milner and Arns are enthusiastic about helping others learn from their success and have given talks at neighbouring fire departments.

Arns said it doesn’t matter the size of the fire department and that trust in leadership is key.

“They see that leadership puts an emphasis on the health of the members. They feel protected, respected and highly valued for all they do to protect our communities.”