July 4, 2016, Fort McMurray, Alta. - The man who led the battle against The Beast says many Fort McMurray firefighters are now wrestling a different set of demons. 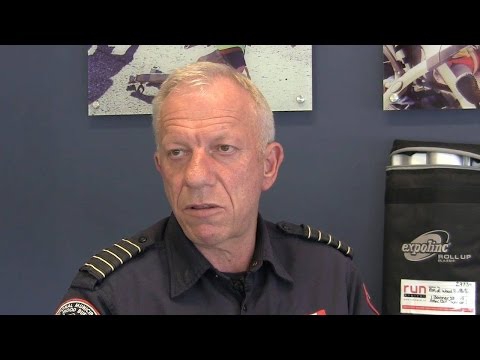 Fire Chief Darby Allen says the emotional toll is hitting home for the crews who worked non-stop for days to beat back the ferocious wildfire that breached the northeastern Alberta city two months ago.

“They went through one of the most significant events that any firefighter could ever go through,” Allen said in a recent interview at Fire Hall No. 1 in downtown Fort McMurray.

Counselling services have been offered from the beginning, but Allen said it’s important that help is available for the long haul.

The blaze was so tough to subdue that Allen has likened it to a wild animal.

“It did seem to have a brain. It did seem to want to do things that we didn’t want it to do. And whatever plan that we came up with, it seemed to come up with its own plan and fight us at every level.”

In the end, about 10 per cent of the town was destroyed, with the majority of the Abasand, Beacon Hill and Waterways neighbourhoods reduced to rubble.

Now, one of the toughest emotions firefighters are battling is guilt, said Allen.

Many firefighters are beating themselves up because they feel like they could have done more. Some watched their own homes burn, but went back to work.

“The reality is we couldn’t have done more,” said Allen. “My job has been to reassure them that they’ve done everything they could and I do truly believe that there were some incredible efforts to save as many properties as we did.”

In some cases, the call to pull firefighters out of some areas was a matter of life and death, Allen said.

“There were some areas — Abasand, Beacon Hill — where we were fighting the fire in those areas for long periods of time and in the end we had to pull out of those areas because of the significance of the fire and the overwhelming nature of the fire,” he said.

“We had to pull our resources out of there because they were literally not going to survive if they stayed there.

“Guys feel guilty about that. They wanted to stay and they couldn’t stay.”

“You have a bit of a honeymoon period off the get-go and that’s because of that incredible support and human compassion that came through loud and clear from everywhere we were in Alberta or Canada or beyond,” she said in a recent interview.

“The next stage, though, is that when you come back into your community and you see the loss and destruction, you go into the valley of death almost, where you just go down into the depths of despair, depression, insomnia.”

Alberta Health Services did close to 13,000 counselling sessions between May 10 and June 28, said spokesman Kerry Williamson.

“I know that at times the numbers were upwards of sort of 300 a day and then other days were a little bit quieter,” he said. “But it’s been consistent that we’ve seen relatively high numbers throughout.”

Blake is expecting milestones and anniversaries to be fraught for residents, but eventually things won’t be so raw.

“I just don’t know how long it’s going to take to come out the other side.”