May 6, 2016, Fort McMurray, Alta. - Displaced Fort McMurray residents got a sobering drive-by view of their burned city Friday in a convoy that was moving evacuees south to reunite with families and friends.

Officials said shifting winds were giving the embattled northern Alberta city a break, but they added the fire that forced 80,000 people from their homes remained out of control and was likely to burn for weeks.

In Edmonton, Premier Rachel Notley announced the government will provide debit cards to help evacuees with immediate needs. Adults will receive $1,250 each and dependents $500. The cost to the province is estimated at $100 million.

The first convoy of 50 vehicles drove through the oilsands city from the north at about 6 a.m. It was escorted by the RCMP and a police helicopter was monitoring the area in case winds shifted to create a renewed fire danger along the route.

Premier Rachel Notley said the plan was to get 500 vehicles out by ground and 5,500 people by air. Another 7,000 were flown out Thursday.

''The city of Fort McMurray is not safe to return to, and this will be true for a significant period of time,'' the premier told a morning briefing in Edmonton.

The road took convoys past blocks largely reduced to grey wastelands of charred concrete and ash, a gutted Super 8 motel and a levelled gas station.

More than 20,000 displaced residents had been living in oilsands work camps since Tuesday after the blaze cut the main road through Fort McMurray and sent residents fleeing either north or south.

Those who managed to escape south settled in hotels, campgrounds, with friends or at temporary reception centres in Edmonton and elsewhere.

Donations continued to stream in from around the country.

The Red Cross reported about $30 million had been donated for victim relief and the Saskatchewan government pledged $250,000. The federal government has promised to match Red Cross donations.

The fire itself stood at just over 1,000 square kilometres. There was no renewed update on number of structures burned, which stood at 1,600 Wednesday, mainly in city neighbourhoods to the south and southwest.

The blaze also hit the evacuated village of Anzac to the south of the city where it destroyed 12 structures.

Morrison said winds were moving the blaze away from Fort McMurray toward unoccupied areas to the north and east.

''This is a dynamic, challenging, extreme fire, so many things can happen. But at this point the prediction over the next two days is for the fire to move away to the northeast,'' he said.

The cause of the blaze has yet to be determined.

There have been no fire-related deaths, but two people were killed in a head on crash near Lac la Biche on Wednesday. Teenager Emily Ryan from Fort McMurray was identified by her school as one of the victims.

A provincewide fire ban was still in effect Friday. Notley urged Albertans to avoid forests on the weekend. She said simply driving close to tinder-dry trees could spark another fire.

Morrison said a lack of rain baking the forest to combustible conditions contributed to the power of the Fort McMurray blaze.

He said its size and ferocity have been unusual, with smoke clouds sparking their own lightning strikes.

''Even once we get rain, there's still going to be a lot of fire out there and a lot of work. We're going to be here for weeks and weeks.''

Melissa Blake, mayor of the Rural Municipality of Wood Buffalo which includes Fort McMurray, said she is heartened by everyone who has helped and by the resilience of residents.

''You see children who are completely oblivious to it, and it's for the children that we all need to stay strong.'' 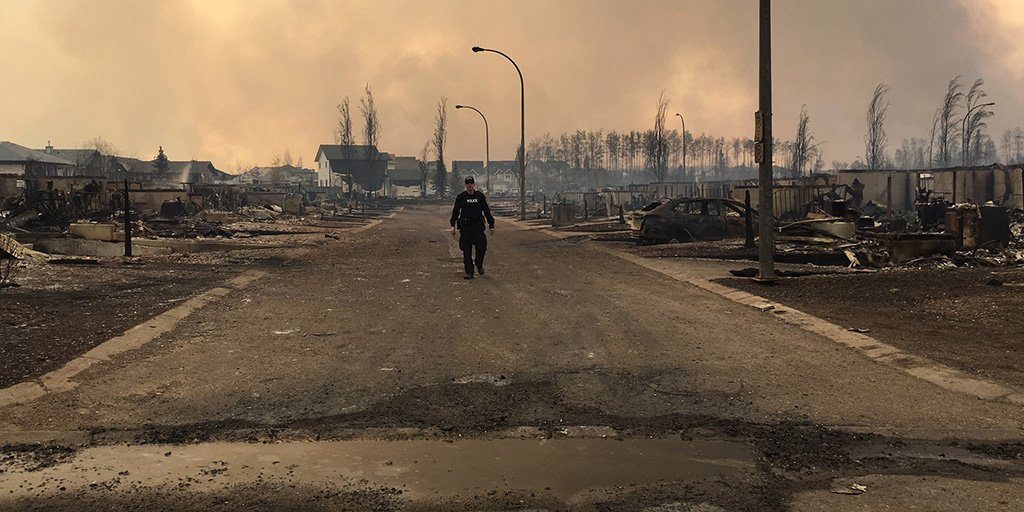 An RCMP officer surveys the damage from the wildfire in Fort McMurray.
Print this page