May 4, 2016, Fort McMurray, Alta. - A wildfire that is raging in the northern Alberta oilsands city of Fort McMurray has now destroyed 80 per cent of the homes in one neighbourhood and extensively damaged property in a number of others. 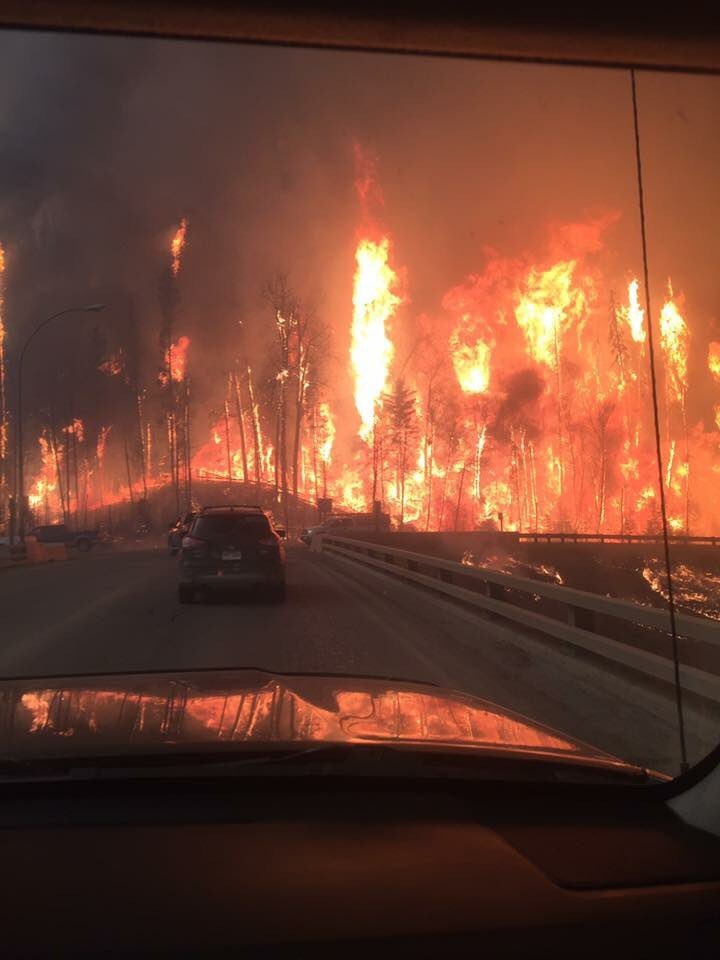 Fuelled by wind and dry conditions

An overnight update from the Regional Municipality of Wood Buffalo says the Beacon Hill suburb in the south end has suffered the most damage from flames that ripped into the city Tuesday afternoon, forcing the evacuation of all 80,000 residents.

(Follow a live blog from the The Canadian Press)

A dozen trailers on McKinlay Crescent in Timberlea have gone up in flames, with serious losses reported in the Abasand and Waterways suburbs.

Some homes have been lost in four other neighbourhoods. So far, there are no reports of injuries.

Forestry manager Bernie Schmitte said at a late Tuesday conference call with the media that the worst of the blaze “is not over.”

Firefighters were trying to maintain crucial infrastructure in the city, including the only bridge across the Athabasca River and Highway 63, the only route to the city from the south.

Fire Chief Darby Allen said they have requested military assistance and expect the army and air force will start sending out troops within a couple of days.

In a statement issued Wednesday, Public Safety Minister Ralph Goodale said the federal government is standing by to provide assistance.

“I am watching the wildfire situation in Fort McMurray with great concern, and my thoughts go out to all of the residents being evacuated from their homes,” Goodale said.

Fuelled by wind and dry conditions

Defence Minister Harjit Sajjan, in a conference call from Germany early Wednesday, confirmed a formal request for assistance has been received from the Alberta government.

What form that will take — at least on the military side — is still being determined and National Defence is expecting to hear soon from the provincial emergency measures about the kind of equipment and personnel required.

“We’re making all assets available,” he said. “Whatever the province and the emergency operations centre assesses that they need, as I stated to Minister Goodale, everything in the Canadian Armed Forces will be made available.”

Shawn Brett was at home when his friends called him about the wildfire, urging him to leave. Brett said when he opened the door of his house there was smoke and flames all around the neighbourhood, so he jumped on his Harley motorcycle and made his way through a traffic jam out of Fort McMurray.

“I didn’t have time for nothing. I literally drove through the flames. I had ashes hitting my face and the heat from the fire was that bad,” he said. “Everything was jammed. It was nothing but the biggest chaos I’d ever seen.”

Amidst the flames and smoke in her neighbourhood April Bolger frantically called 911 for an ambulance to help her 20-month-old daughter, Lilly, who has congenital heart failure. Bolger said she was told to fend for herself.

“The operator actually told me it would be faster and easier to put her in my vehicle and drive out of town because there was no way an ambulance was able to come to help,” she said. “I had to put a drenched towel over her face, practically smother her, to bring her to my vehicle.”

Bolger said her family was waiting to join the long line of vehicles fleeing south to Edmonton. She planned to bring Lilly to the Stollery Children’s Hospital.

Politicians of all stripes sent out their condolences, but the leader of Alberta’s Opposition was busy dealing with his own loss.

Wildrose Leader Brian Jean, who is member of the legislature for the area, said his home of the last 10 years was destroyed, and he expected his childhood home probably had been as well.

He said businesses that have been in his family for three generations were also lost.

“It is a devastating impact but I’m hoping that we’ve had no loss of life,” he said.

The blaze had started on Sunday and seemed on its way to being neutralized Tuesday morning. But the winds shifted quickly and drastically in the mid-afternoon.

Suddenly, the flames stormed along a ravine and roared into the city and the race was on to get out.

Pictures and video on social media depicted a hellish scene — fire jumping roads, burning debris pitched into the paths of cars, and frantic residents lined bumper to bumper in vehicles, trying to find their way through the thick grey haze as air tankers and helicopters buzzed overhead.

“(With) the heat from the oncoming smoke and the flames, you could see mini-tornadoes forming near the road,” said resident Jordan Stuffco. “It was something out of an apocalyptic movie.”

Resident Carol Christian drove to an evacuation centre with her son and cat.

“When you leave … it’s an overwhelming feeling to think that you’ll never see your house again,” she said, her voice breaking.

“It was absolutely horrifying when we were sitting there in traffic. You look up and then you watch all the trees candle-topping … up the hills where you live and you’re thinking, ‘Oh my God. We got out just in time.’ “

John Henderson of Edmonton, a scaffolder who was staying at a camp about an hour north of Fort McMurray, said he and the other workers were going to be flown out to make room for the evacuees, most of whom had arrived on buses and were staying in the gymnasium.

“Let’s face it, if things go south — and by south I mean move more north — this isn’t a place you want to be anyways.”

Hayley O’Malley, a construction worker from Edmonton, said she was going to head up to Fort McMurray with a group of about 100 friends to help out, adding they would load up with water and food to take to the evacuees.

“I’ll drive north, help out where I can and see what happens,” she said.

However, the Alberta Fire Fighters Association sent out an urgent tweet, pleading with people to stay home.

“We all want to help but UNDER NO CIRCUMSTANCES SHOULD YOU SELF DEPLOY!”

Fort McMurray is the capital of Alberta’s oilsands region and sits about 435 kilometres northeast of Edmonton.

It was five years ago this month that wildfires destroyed about one-third of the community of Slave Lake, Alta. More than 500 homes and buildings were damaged at a cost of hundreds of millions of dollars.

“In terms of fire this is our biggest fire evacuation,” she said. “This is bigger than Slave Lake.”