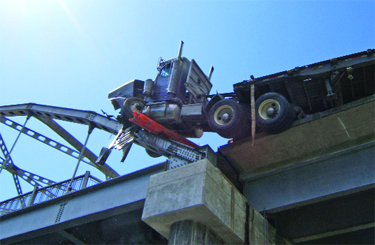 Imagine the scene, a fully loaded semi-truck and trailer hanging over the edge and up the arch support of the only bridge leading to Sooke, British Columbia, leaving its population of 11,000 people virtually cut off from the rest of Greater Victoria.

PHOTO COURTESY SOOKE FIRE DEPARTMENT
The scene that greeted the Sooke Fire Department when responding to the 1400hrs page-out to an “MVA” on the Sooke River Bridge, Monday, May 8, 2006.

That’s the scene the Sooke Fire Department came upon when responding to the 1400hrs page-out to an “MVA” on the Sooke River Bridge, Monday, May 8, 2006.

While not an everyday call, accidents on or at the approaches of the bridge are not unusual for this department.  Located 40 minutes from Victoria, the Sooke River Bridge is part of Highway 14 and is the only crossing into the community of Sooke and all points west along this route.

First out of the fire station was Fire Chief Bob Kelsey in the command vehicle, closely followed by Rescue Engine 205 with a crew of four volunteer firefighters.   Arriving on scene, firefighters were met with an amazing sight.  Hanging from the edge of the bridge and driven part way up its arch support was a loaded semi-truck and trailer.  Debris from the accident covered the bridge deck.  A badly damaged car containing one victim was slightly behind the semi-trailer.   The driver of the truck had already managed to escape from his rig, however, the female driver of the car was injured and trapped in her vehicle.

A bystander announced that another vehicle, a pick-up truck, had also been involved in the accident and was further down the road and around the corner out of sight of the original scene.

To make matters worse, one 200-litre fuel tank on the truck had been punctured and diesel fuel was running across the bridge deck as well as spilling into the river about 12 metres below.

Quickly realizing that the incident was more than initial crews could handle, and facing the standard shortage of manpower for a daytime response, a mutual-aid request was made to the neighbouring Otter Point Fire Department.

A quick plan of action was developed under which the crew of Engine 205 would extricate the driver of the car
from her vehicle, where she was pinned behind the steering wheel, and check on the status of any occupants in the pick-up truck.

The next arriving apparatus was Sooke Squad 206.  This unit is equipped with a CAF system along with pads and booms for spill control.  This crew was tasked with protecting the scene using a 1 1/2" foam line in the event there was any ignition of the spilled fuel.  With the assistance of firefighters from the Otter Point engine, Squad 206 was also tasked with stopping or controlling the leaking fuel.

By this time, RCMP had arrived on scene and closed the road to all traffic. Ambulances were also on scene to treat and transport the injured.

The woman driver of the car was quickly removed from her vehicle after the door was forced open with the hydraulic spreader.  She was transported to hospital with a compound leg fracture on her right side.  The driver of the pick-up truck was not injured and had already exited her vehicle.  Amazingly, she had traveled almost 100m in her vehicle with only one front wheel. The complete wheel assembly from the driver’s side had been sheared off in the impact with the tractor-trailer unit.

With all the victims accounted for, attention turned to the leaking fuel from the truck.  The tank had just been filled and a sizeable amount had already flowed across the bridge and into the river.  Booms and pads were placed in the water to contain the spilled fuel, while a quickly manufactured funnel was constructed from a roof ladder wrapped with a poly tarp and used to direct the fuel into containers for later disposal.

With all the hazards taken care of, provincial bridge inspectors requested all apparatus be removed from the deck while they reviewed the integrity of the superstructure and decking.  After careful inspection, it was determined that the only significant damage was to the railing itself where the truck had driven through five of the sections.
With the bridge declared safe, accident investigators took over the scene.  After almost two hours of waiting, the bridge was opened to pedestrian traffic only.  Hundreds of cars were backed up on either side and the evening commute was just starting.  By the end of the event,  cars were abandoned along the route for a distance of more than 4 km from the scene with most of the occupants choosing to walk home.

Cranes were eventually positioned to clear up the scene. Before workers could begin to remove the truck, they first had to remove the load of steel from the trailer and transfer the load to another vehicle.  To make matters worse, one of the truck cranes was poorly placed and ended up with a bent boom and had to be removed from the scene.  The remaining truck crane was re-positioned and successfully lifted the truck off the arch. The bridge was finally opened to one-way traffic at about 2000 hrs and to two-way traffic at 2230 hrs.  The last of the firefighters returned to the station at about 2300 hrs, some nine hours after the incident began.  The driver of the truck is facing several charges and is scheduled to appear in court.

THE DEPARTMENT
The Sooke Fire Department is located on Western Vancouver Island and protects an area of about 70 square kilometres from two fire stations.  The department complement consists of three career firefighters (Fire Chief, Deputy Chief / Inspector and Captain / Training Officer and 40 volunteer firefighters along with five volunteer public educators.   Apparatus for this rapidly growing community of 11,000 people consists of two engines with 1250 pumps and 1000-gallon water tanks, a squad unit with CAFs, a heavy rescue truck and a 1400-gallon tender along with three support vehicles.   A brand new 109 foot / 1750 quint has just arrived and is expected to be placed into service at the end of March.  In 2006, the department responded to more than
700 incidents.