A new instrument offers insights into the nature of firebrands 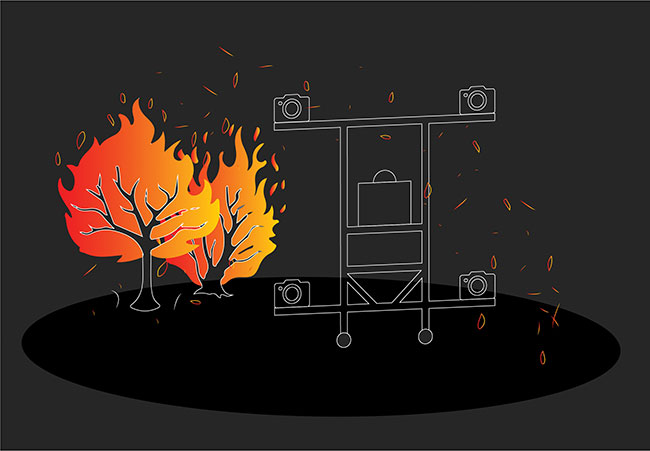 The details of how wildfire-spreading embers behave have largely been shrouded in mystery, so guidance on protecting buildings from them is thin. But NIST’s new emberometer, which can track and size up the elusive particles, may shed some much needed light on the issue and help lay the foundation for cost-effective guidelines in building codes. Photo Credit: NIST

As wildfire fronts advance through landscapes or communities on the ground, they also attack from above, launching volleys of glowing embers into the air. Also known as firebrands, these specks of burning debris can glide for up to 40 kilometers (approximately 24 miles) before landing and can cause up to 90 per cent of home and business fires during wildfires.

Guidance on fending off ember attacks is sparse, largely because so little is known about embers’ behavior. But a new instrument, dubbed an emberometer, could offer a glimpse at their true nature. In a paper published in Experiments in Fluids, researchers at the National Institute of Standards and Technology (NIST) showcase the tool’s ability to characterize the size and trajectory of embers, which may provide insights into their level of threat. With NIST’s new tool, fire engineers may be better equipped to protect buildings from embers and could produce data to support cost-effective guidance in building codes.

The dangerous conditions in which embers arise and their seemingly random nature have made measuring them an uphill battle. One go-to approach has been to collect embers from water-filled pans, which allows researchers to count and size up embers after a fire has gone out, but it paints far from a complete picture of what happens during ember exposures, where structures are swarmed by flaming debris.

Because embers act so erratically, measuring how their behavior changes from one second to the next while they are still airborne is crucial. NIST combustion specialist Nicolas Bouvet and his colleagues built the new instrument to do just that.

The emberometer is composed of a metal stand, shaped like a capital H on its side, with point-and-shoot digital cameras attached to the end of each of its four arms. The researchers designed it to be operated from more than a kilometer away and embedded its electronic components in fireproof materials to make the system deployable in fiery conditions.

Through a method known as particle tracking velocimetry, the emberometer uses data from its four perspectives to trace the path of brightly lit objects (such as embers) as they pass through a 2-cubic-meter (more than 70-cubic-foot) box-shaped space in front of the device. The system also captures the silhouettes of each ember from four different angles and merges the perspectives to digitally reconstruct their 3D shapes.

The emberometer made short work of the initial experiments, some of which tested the device’s ability to track burning wooden sticks fastened to the end of a rotating metal arm, and to estimate the sizes of small plastic spheres the researchers dropped in front of the cameras, Bouvet said. With the simple tests behind them, the researchers’ next move was to find out if the device could put numbers to real embers.

In NIST’s National Fire Research Laboratory — a space where experiments involving intense flames can be carried out safely — the authors set up the emberometer downwind of a firebrand generator capable of producing showers of embers at a larger scale.

In less than a minute, the emberometer observed hundreds of embers zip by at speeds varying from tens to hundreds of centimeters per second. The tool tracked the moving particles and reproduced their forms in 3D, as before. The researchers checked the emberometer’s sizing work by collecting embers that had fallen into water-filled pans during the experiment and comparing the doused pieces of wood to their digital counterparts.

“The emberometer compares very well to what is directly being collected in the water pans,” said Bouvet. “I’m very confident for the tracking, and for the sizing we’re satisfied.”

Because of the amount and complexity of data captured by the emberometer, comparing different ember exposures could be a challenge, even if the data is accurate. The researchers’ solution is a visual aid called a firebrand rose, which summarizes the traits of an exposure by packaging information on the number and orientation of embers through space and time into one graph.

The potential benefits of the emberometer are multifold. Engineers could add depth to the shallow pool of data on real ember exposures by taking the tool outdoors and also use it to ensure that embers produced in the lab match field measurements.

More outdoor research could make mitigation efforts more cost-effective as well, if researchers using emberometers tie ember threat levels to environmental conditions, such as the intensity of drought or wind. That data could inform new building codes and standards that offer fire safety professionals guidance on selecting a degree of protection appropriate for the surrounding conditions.

“We want to be able to look at the fuel type, topography and weather, and have an idea of how serious an ember exposure might be for a structure,” Bouvet said. “Building codes can use that information to advise you on how to harden your structure. If you’re somewhere in the middle of a grass field, it’s not going to be the same as if you’re surrounded by tall trees.”

The NIST team’s next step is to give its system a touch of artificial intelligence. Because the device only has four eyes, it cannot always make out every detail of an object’s shape. But with machine learning, the emberometer could fill in blind spots, improving its size reconstruction measurements.

Soon after, the researchers plan to test-drive the emberometer in the great outdoors, where it can face embers born out of real — albeit controlled — wildland fires. By learning lessons in the field, the team could further tighten its design, readying the emberometer for widespread use.