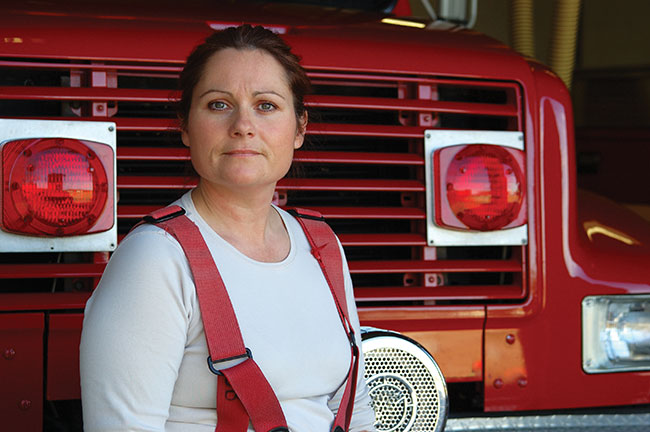 Women make up a small but growing number in the fire service and MacDermid says it is always important to consider the impact of gender differences when doing research. Photo credit: Wellford Tiller/Adobe Stock 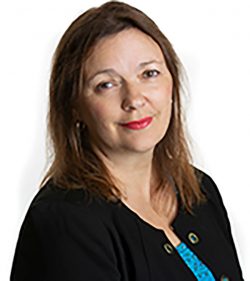 It was a pleasure to interview Joy MacDermid, PhD, for this Q&A on her research about women in the fire service. MacDermid is the scientific director of Firewell. She is a physical therapist, hand therapist, epidemiologist and holds a CIHR New Investigator Award. She is co-director of the Clinical Research Lab within the Roth | McFarlane Hand & Upper Limb Centre and an associate professor at the School of Rehabilitation Science at McMaster University.

Q: Can you give us an overview of your career and how fire fighting fits into it?

I was trained as a physical therapist first, but after a few years I went back to school to pursue my PhD in epidemiology. I had a lot of experience working with patients on all different issues and kinds of work, and sometimes this included firefighters. I then took on a faculty position at McMaster University in 2001, working mostly on issues related to musculoskeletal problems. While I was there, firefighters actually approached me to say they were having a lot of musculoskeletal injuries and asked if it would be something I’d consider researching. In those days it was actually extremely hard to get any funding, so we conducted the first few studies into firefighters without any funding, just meeting regularly, and that was essentially how I began my research into firefighters.

Q: What was the focus of this research?

When we met with firefighters, there were many emerging trends facing the industry and we focused on three key issues: high rates of musculoskeletal injuries, high rates of mental health issues and higher rates of cancers in firefighters when compared to other first responders.

We started looking at the early experiences of first responder women in Hamilton, Ont. There were only five women firefighters in whole service at that point in time and about 350 men. Four out of the five women were willing to be interviewed about their experience in the workforce and about being a woman in a male-dominated occupation.

Q: What were your biggest takeaways from your study on women in the Hamilton Fire Department?

I really loved that study because the themes that presented themselves through that qualitative study, and in interviewing these women, are still relevant today. The women said they loved being firefighters but they definitely recognized the differences compared to their male colleagues, specifically in terms of physicality. They had this strength deficit that really put a focus on training and keeping their strength up. They also talked about the importance of having respect. They wanted to earn that respect. They didn’t expect it to be just given to them, but some felt that some of their male counterparts felt they weren’t supposed to be there. Of course, sometimes, there were negative consequences to that. It won’t feel like a great work environment if you feel unwelcome, but it can also affect training and cooperation when doing tasks, especially with fire fighting because it requires people to work together.

The other thing we noted was the notion that women are not small men. They have different body shapes. Traditionally, women have been given small men’s equipment but it doesn’t fit the proportions of their bodies properly. One of the really nice things that happened during that study was some of the collaborators on the project, who were men, decided to fix that issue — firefighters are very task-oriented — and find someone who made equipment for women. Even before that paper was issued, that problem was already resolved in the Hamilton fire department. I think Canadian services have moved a lot in that direction in terms of realizing that equipment fit is important for men and women and they may need to do a little bit of extra effort to find equipment that fits women but there’s still definitely room for improvement there.

Q: A lot of your research has focused on firefighter injury statistics. Can you expand on how genetic, biological and hormonal differences between men and women come into play in in firefighting?

There’s so many differences between men and women and it’s always important to research these differences and look at whether they have an impact, but it’s also important to recognize that sometimes there aren’t differences. When we talk about these differences, we are talking about groups and not individuals. For example, men are usually taller than women, but there are some women who are taller than men, so some of these findings don’t apply to specific individuals, and it’s important to respect that individuality too. That said, on average, there are many clear differences and distinctions, and they do play a role. For example, women’s biology will affect how much weight they can carry during a given task. When they are exposed to toxins, women might be more at risk of certain cancers than men, or their systems might respond differently. Another issue is psychological exposures. We don’t know enough about this to determine if women are better or worse at handling some of the critical traumas or whether they respond differently. What we know now about mental health in general is that men and women tend to respond differently to stressors and they also manifest mental health symptoms differently. So, for example, depression might look different in women than it does in men. Men might feel more stigma about expressing mental health symptoms than women and that can be a barrier to them getting appropriate help. It’s not always that when we study sex or gender, we’re saying that women are always disadvantaged. Sometimes men are disadvantaged and we have to study it to so we know how we can help and benefit both.

Q: How do the social differences between men and women present within the fire service?

Anyone who feels like they’re the minority in any environment—in the case of the fire service, it’s three per cent who identify as women—it’s likely to have some sense of social isolation. For women, in some services, they may be the sole woman in their service or on one particular shift so that’s why I think organizations like Fire Service Women of Ontario are so important. They give women a sense of community and that social connection they may not have otherwise. There’s definitely some evidence that this is even more important for women than for men so the social needs might be different for each gender. Then, we know that gender intersects with other things, like race for example, so if you feel you can’t identify with others in your workplace, that can also lead to greater feelings of isolation.

Firefighters also deal with high-stress conflict in situations all the time, and men and women have different skillsets they can bring into those situations. We don’t have as much research on that but I’ve heard anecdotally that lots of male firefighters like having women at those situations because they have a different skillset that they find beneficial in those settings. So, on both sides of the fence, in terms of social needs and also social skills, there’s a lot we have to learn about sex and gender and how we can make sure that it’s a welcoming place for all. We need to work to maximize the skillsets that firefighters have in terms of their social skills because that’s become an increasingly important part of their role.

Q: How does behavioural health fit into this discussion around sex and gender, specifically in terms of discrimination, harassment and/or job satisfaction?

The research conducted into this topic has found that when people are harassed at their workplace, they tend to report decreased job satisfaction and develop more mental health issues. The main message is that if employees are treated well, they will be healthier. This is certainly true for both men and women. We have to work to make it a healthy environment for people so when the inevitable stressors and exposures happen, firefighters feel supported and free of discrimination within their work environment.

I think it’s important to note that there isn’t a real big discrimination problem, to my knowledge, within the Canadian fire service, but the reality is that there aren’t as many women or gender-diverse people and the racial diversity often doesn’t reflect the communities that they serve, so, as people become aware of that and move toward making the fire service representative of the populations they serve, it will be something departments need to pay attention to.

Q: Why should research consider sex and gender differences?

There are many reasons and one example we often reference is about how most of the research into pain used male rats but that means we don’t really understand the female physiology of pain as well as we do for men. It’s been just recently that we’ve become more aware of how important it is to consider sex and gender in every research project. There’s very few exceptions where it doesn’t supply. It’s important to consider sex, gender and their intersectionality with race and culture and social things as well because that will affect work in every workplace. The main reason is that we can’t be sure that the results from a study on one group will apply to a different group, meaning if the research is done on men, we don’t know if it’ll apply to women and vice versa. We’ve found that you could actually make big mistakes in terms of treatment programs when you don’t take this into consideration. This has been seen in pain studies, but also in studies of heart disease. In much of the early research, it was thought that heart disease only kills mostly middle-aged men, but we now know that it’s one of the top three killers for both men and women. It was because the research only focused on men that, for the longest time, we didn’t know heart disease presented differently for women; that their symptoms don’t look the same. The consequences of not considering sex or gender may also result in making big mistakes in  treatment planning. It’s about recognizing that the same drug and/or treatment that works for men may not help women. We need to know how an issue presents in a person and what treatment will work. That can only be done if we do the research and have the knowledge first.