Firespread was extensive in a heritage building as fire fighters in Longueuil, Que., chased it through voids in walls and ceilings created by renovations. 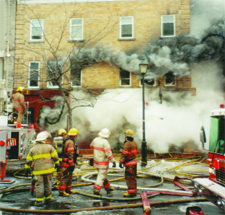 Voids from renovated areas in an old building provides pathways for firespread as Longueuil, Que., fire fighters worked more than half a day to contain a fire in the older part of the city. It was on Feb. 19, 2005, that the Longueuil (Que.) Fire Department was called by its 9-1-1 dispatch for a possible fire in the Pavarotti restaurant on St. Charles Street in this part of Longueuil where most, it not all, of the prime structures are 75 years old or older. It is the trendy centre of this community.

The call was received at 13:00 hours, for smoke showing. Customers were in the restaurant as were patrons in the eatery next door so that upon arrival the crews' first priority was to see everyone was evacuated and accounted for.

Arriving on scene, the first-due crew reported smoke coming from the building and requested a general alarm be sounded. Supply lines were laid, all 4", along with aerial devices being positioned at the front and side of the structure.

In his size-up, the initial incident commander reported he had fire in a three-storey, multi-level building;. To the rear it was one-storey of brick and wood construction with a flat tar and gravel roof,  on the street level was a restaurant, on the second floor there were two commercial firms and the third floor had residential housing. The building was at least 100 years with renovations having taken place over the years.

Fire suppression was mounted with crews both at the rear and in the dining area at the front. In each of the sectors an interior operation was in progress with 1-3/4". At the rear an attack team entered the kitchen area, while other crews carried out roof ventilation on the one-storey sector. Meanwhile crews at the front were able to get into the dining area, which  was by now filled completely with smoke, billowing out the front of the building.

One crew worked its way into the basement but found it to be a service area and not a full basement. It was determined this was an area that was not safe to operate in as it was a crawl space. The team was ordered out and the position given up.

The area of the city where this incident was unfurling is known as Du Vieux-Longueuil (Old Longueuil) it is a part where most of the building stock is a century old. While the water system is good in this area, many of the mains are not of a large diameter, which can hinder any fire suppression operation. For this large outbreak where the demand for water was large, the IC had to rely on relay pumping operations.

Ventilation at the rear on the single-storey addition went well and the smoke and heat was able to escape giving interior crews working in this sector some relief.

Interior operations were continuing on the first floor as crews attempted to cut a hole in the floor to get at the seat of the fire, which the owner told them appeared to have started neat the electric panel. This effort had to be given up due to the very solid construction of the floor in the old building.

Meanwhile, crews on the top two floors were opening up walls and ceilings to locate the firespread and get ahead of the flames that were now extending throughout the structure, moving quickly through the many voids left over by various renovations that had taken place over the years. Even the exterior walls, which had new brick veneer covering the original walls, was a route for firespread.

Safety officers soon realized that interior crews would have to be pulled out along with those on the roof of the original building and be redeployed to cut off the fire extension to the adjacent building. Fire was now evident on the second floor and making its way to the third floor and the roof. This size-up proved correct as flames were soon erupting from the roof along with heavy black smoke from the second floor.

It now was an exterior operation. Fire had also spread to the small eatery next door and both commercial establishments were now being consumed. This firespread again was due to the voids, in which there were no fire stops.

During the height of this incident there were 75 fire fighters involved in suppression activities. It took more that 15 hours before their work was complete. On the positive side there were no serious injuries to any citizens or fire fighters. The two restaurants on the lower level were destroyed while a communications firm and a travel agency on the second floor suffered heavy fire and water damage. Those living on the third floor lost most of their possessions, this latter due to the roof collapsing into their apartments.

Conclusions
1. Knowing when to get crews out of the service-type basement area eliminated the danger of possible serious injuries to fire fighters.
2. Getting roof crews to move to the adjacent building was a good tactic and stopped fire from getting a hold at that level.