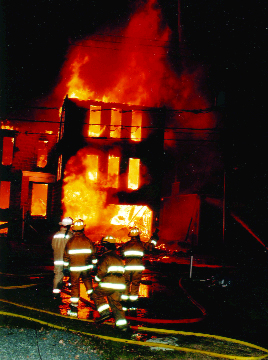 A spectacular general alarm fire occurred in the old section of Chateauguay, Que., on the night of Nov. 14, 2004. The fire was in a large three-storey family home and kept 41 fire fighters from four departments busy for close to six hours, forcing residents from three other homes to evacuate until the call-clear was given for them to return.

PHOTO BY JOSEPH GLOVER
A chief officer sees that exposure lines are in position during this general alarm fire in Chateauguay, Que. last November. Fire spread too rapidly through this three-storey residence for any effective interior operation but all exposures were saved.

It was at 20:09 hours when a call was received by the 9-1-1 operator for a report of a chimney fire with smoke filling the house. A full first alarm assignment was dispatched. This consisted of a pumper, a quint and a rescue unit, under the command of Lieut. Paul Durand with seven fire fighters.

While en route the crews could see a glow in the sky. Based on this sign, Durand immediately had dispatch tone out a second team of part-time fire fighters. The first-in crew arrived on scene at 20:16.

Durand as the officer in charge conducted his size-up and reported they had a large three-storey private home, approximately 50' by 120' constructed of wood with a brick facade and an attached garage. It had a peaked roof covered in asphalt shingles. It had three exposures, all homes, one only 10 feet away. The rear of the structure was fully engulfed in flames right up to the third level.

In rapid order, Durand upgraded the call to a second alarm at 20:21 then to a third and fourth alarm at 20:34. At 20:37, he requested through dispatch that mutual aid be called from St-Isidore to cover Chateauguay’s station and for pumpers from Kahnawake and Mercier to respond to the scene.

An interior attack was mounted. Both the first-in pumper and quint from Chateauguay had laid in with 4" supply lines. The attack crew took a line into the house and were able to get to the third floor where they found the fire had already extended into the attic area, which was unfinished with open stud walls. One part of the roof had begun to collapse. Chief of Operations Luc Lapointe, who had by now arrived and taken over as IC, gave the Code Red at 20:31 for all crews to evacuate the house.

Chief of Operations Demarais was the water supply officer and had the Kahnawake Fire Brigade catch a hydrant and lay a 4" line to relay to the Chateauguay pumper. He then had Mercier’s pumper go to a nearby street and lay a 4" supply line to the quint, which was now in full operation with a ladder pipe in play to protect the closest exposure.

Chief of Operations Bouchard was tasked with communications between the fire officers, police and the ambulance service. There were two command units at this incident, one for fireground operations and one for all other functions.

By 20:40, reports had more than 90 per cent of the roof collapsed with heavy fire showing on all three floors throughout the house. An attached garage was fully engulfed.

Director Michel Lussier was on scene but left command with Lapointe, recommending to him that protecting the three exposures should be the priority. With the fire building collapsing, embers were now the new threat.
Being very close to the St. Lawrence Seaway, two portable pumps were set up to draft from the open water, each supplying a 3" line for exposure protection to the closest exposure, from the rear.

It wasn’t until 22:30 that the fire was considered under control. All the exposures were saved. Only the closest home suffered some interior damage, from crews who entered and cut some holes to check for any fire extension to this building. None was found.

During this incident, there were six crews working suppression operations. They employed two 1-3/4" lines, five 3" lines, one ladder pipe and two deluge guns. One firefighter was slightly injured. None of the residents who were at home at the time of the outbreak suffered any reported injury.

Both the Surete Quebec police and the Chateauguay Fire Department carried out the investigation into this $1-million fire. The exact cause is undetermined at the time of writing but all evidence to date points to the chimney area in the lower level of the home. The rapid fire extension was attributed to an interior atrium design allowing vertical spread and to the unfinished, open attic without firestops. The home itself was just two years old and some interior work was still to be carried out.

Conclusions
1.     Knowing early into the incident that the original building was a write-off, moving more resources to save the exposures resulting in little damage to the adjacent homes.
2.     With command giving the Code Red for immediate evacuation of fire crews in the early stage, firefighters were moved into a safer zone before the building collapsed.
3.    The quick use of the mutual aid system ensured the city was covered during this incident and that adequate resources were available at the scene.

Department profile
The Chateauguay Fire Department provides protection for an urban population of 50,000 from one seven-bay
station. It is a composite service of 56 firefighters under the command of Director Michel Lussier and three chiefs of operations. It has two full-time fire prevention officers. On the apparatus floor are two aerial devices, two pumpers, one heavy rescue, two command units, two boats and a service vehicle. Chateauguay is located southeast of Montreal.