Aug. 18, 2014, Toronto – As I write this, my arms, legs and core are all a little sore, but it’s the kind of sore you wake up to the morning after a good workout. Now, I’m not much of a gym rat, but I could certainly get used to workouts at the Fire and Emergency Services Training Institute (FESTI) in Toronto where I was taken through firefighter training on Wednesday.

Editor’s note: In between writing and editing, Fire Fighting in Canada’s new assistant editor, Maria Church, has been busy learning the difference between a Halligan and a pike pole and feeling what it’s like to sweat in bunker gear. Contact Maria at mchurch@annexweb.com and follow her on Twitter at @maria_firecan

Now, I’m not much of a gym rat, but I could certainly get used to workouts at the Fire and Emergency Services Training Institute (FESTI) in Toronto where I was taken through firefighter training on Wednesday. Over two hours, FESTI trainers introduced me to live fire, had me put out a vehicle fire, and put me through a confined-space maze for search and rescue.

The training was my baptism by fire as the new assistant editor of Fire Fighting in Canada and Canadian Firefighter and EMS Quarterly. It followed an introduction to firefighting basics at the Oakville Fire Department a few weeks ago.

Despite how many times I’d heard “baptism by fire” from my editor, Laura King, I never thought I would actually don PPE, walk into an enclosed building, light a mound of straw on fire, then wait to watch the room fill with flames and smoke before hosing it down. What a rush!

The experience was enlightening in multiple ways. As a total newbie to fire fighting, I was able to get a sense of what our columnists deal with on a day-to-day basis. Laura has taught me that our magazines are written almost exclusively by firefighters for firefighters, so to be able to help edit the columns and, eventually, to contribute to the magazine, I need to have a good sense of how difficult the job is and what kinds of challenges are inherent (attempting to steer the 100-psi hose towards a dumpster was possibly the most difficult physical challenge I’ve ever experienced).

Secondly, I was introduced to several fire-service professionals, all of whom have given me a sense of the men and women behind the SCBAs.

So many hands have been helping me settle in to my new role over the past month; in Oakville, trainer Tony Remmig gave me my first taste of fire fighting and his patient professionalism was just what an ignorant newcomer needed to learn what does what and where it goes. The fire department crew from Oakville also showed me some auto ex moves and gave me the chance to smash a few windows and cut up some metal. It was awesome. 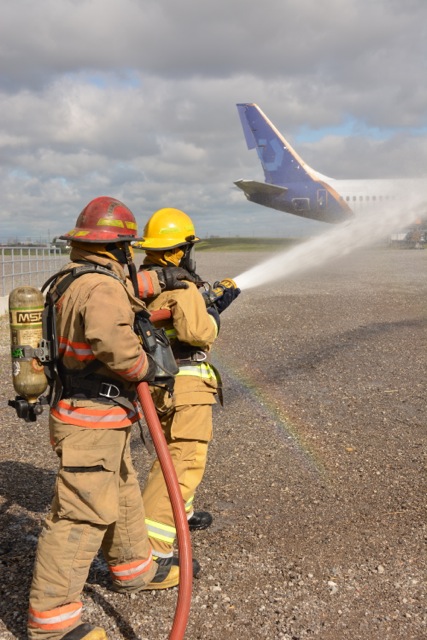 At FESTI, the trainer patience was continued by Rob Lenders and Phil Bott who held my hand, sometimes literally, through the intense hands-on training with live fire and confined space (not at the same time – thankfully). Cody, a recent graduate from FESTI, was my buddy in the confined-space maze and his glowing SCBA and encouraging advice was a huge comfort in the pitch black. Every firefighter I have encountered has been a pleasure to meet. Suffice to say, I am ecstatic to be working with such a welcoming and tight-knit group.

Back to my literal baptism by fire, I have been struggling to avoid romanticizing the experience of my first live fire, but it really can’t be helped. Watching flames lick the walls, smoke curl down from the ceiling and hot embers float to the ground while a firefighter slowly encircles the source of the fire is romantic, and I can now say that first hand. As I watched it all happen behind my SCBA, feeling the heat descend on me yet safe in my PPE, I understood, just a little, why firefighters love their jobs.

And I look forward to learning even more.