Winter can be fun: sliding, skiing, skating, hockey, or just going for a walk in the crisp fresh snow are all great cold weather activities that can put a smile on our faces. These are the happy thoughts of winter most of us would like to envision. 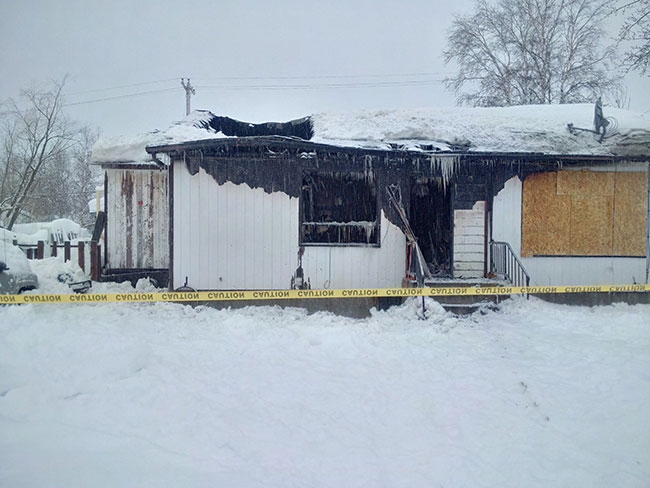 Our first working fire this winter was a fully involved arson at a single-story residence on Jan. 19. The temperature was around -23 with 30 km per hour winds (-35 to -37 with wind chill). Winter can be fun: sliding

Though this past winter, like last winter, has many of us cursing the season once again. It has been a cold winter for most Canadians. Even some of the most densely populated parts of the country got down to -20 or -25 degrees. Brrr!

When I began writing this in my recliner, lulled by the fairly continual sound of my furnace, I was checking the local hourly weather report from the Environment Canada station at our airport in Lynn Lake, Man. It was -34 with wind chill values of -50. These temperatures have been fairly consistent for almost three months, now, with a few “warm days” in the mid to low -20s. I’m writing this in the dead of winter, and while the majority of Canadians will be snow-less and maybe even planting their gardens when they read this in May, we’ll likely still have ice on the lakes here in Lynn Lake. I would like to take the opportunity to discuss some of the things we’ve learned this winter and share some of what we have discovered.

This is my first year as fire chief of the Lynn Lake Fire Department, which is a small paid volunteer department of 16 members and experiences low call volumes as we are separate from the EMS service in our community. We like to think our low call volume is due, in part, to the number of visits our department has made to the school in the last 12 years. Our department has traditionally had teachers serving as firefighters, which has made a difference, as well as our pro-active community involvement. Alas, fires happen. And too often, fires happen when cold weather creates harsh conditions for firefighters.

Our first working fire this winter was a fully involved arson at a single-story residence on Jan. 19. The temperature was around -23 with 30 km per hour winds (-35 to -37 with wind chill). Once the fire was out, we packed up and returned to station for cleanup, reloading, re-checking, and post-incident de-briefing, as usual.

A week later, on Jan. 27, we attended a two-storey residential structure fire of unknown origin. Temperature was -30 with a 30 km per hour wind (-45 with wind chill). This is where we truly learned a few lessons.

As a rule, our department responds to structure fires with both of our pumpers. One acts as the primary unit, while the other stands idling as a secondary in case there are issues with the primary unit, or additional tools or equipment is needed. Once suppression operations have concluded and the fire is out, hoses are re-laid on the bed, tools are packed, and our crews return to station for a post.

On the occasion of the second fire on the 27th, however, we discovered a couple of previously un-detected problems in our Standard Operating Procedures and Guidelines (SOP and SOG) that only became apparent in the extremely cold winter conditions. It all started with a mechanical problem with our primary pumper a couple hours into the operation. The pumper stalled and could not be immediately restarted. With our secondary pumper standing by about 50 feet away, attack lines were quickly transferred from our primary to secondary pumper.

This meant our attack lines were shortened by 50 feet, but they remained operational on the secondary pumper. An additional two 50-foot x 1 ½ inch lengths were later added to the initial attack lines at the pumper end and connected to our secondary pumper. Immediately after starting to send water from the truck there was no water at the nozzle discharges. The nozzles were packed solid with slush, which also plugged at least the last foot of each attack line. The nozzles were also frozen to the ends of the attack lines.

We keep a small propane torch in our rescue van, and spare nozzles on our pumpers. Crews used the torch to thaw the collars on the nozzles, reduce discharge pressures to 30psi from the pumper. Firefighters then pounded on the plugged section of hoselines without the nozzles attached, while digging at the inside of the open male coupler with a screwdriver to clear the rapidly freezing slush before the hoses became useless lines of ice from pumper to business end. Spare nozzles were then connected and operations resumed.

Determining what went wrong during the incident was easy: There wasn’t enough hose laid out during initial setup. Knowing situations at an active fire are fluid and subject to change, we discussed what else could have gone wrong even if the incident commander (IC) had ensured more than enough hose was deployed.

Our first working fire this winter was a fully involved arson at a single-story residence on Jan. 19. The temperature was around -23 with 30 km per hour winds (-35 to -37 with wind chill).

What would the IC do if an attack line had burst and failed one or two hours into the operation? What if one or both lines had frozen? The immediate solution would be to pull an adequate length of fresh line and nozzle off another hose bed, connect it to the pumper and carry on . . . and we would have run into the exact same situation. Here’s why:

Approximately five years ago, we finally took the last of our cloth hose out of service, replacing it all with rubber attack lines. The firefighters rejoiced. Gone were the days of hanging 500 feet or more of cloth hose 25 feet up the centre of the hall on a draw-bar, rope and pulley system, leaving it to dry for a couple days before racking and rolling. ‘It’s all rubber now — it won’t rot if it’s walked and re-laid on the trucks,’ was the perspective of both firefighters and command officers. All we would have to do now is ensure that the rubber hose lengths are separated, walked, reconnected, and laid back on the bed after each use.

These practices are in line with recommended standard practices of several fire service hose manufacturers. However, even with adequate walking there will still be some residual water left inside the hose, particularly if that hose was walked out at very cold temperatures, leaving a film of ice inside the interior hose walls. It will melt back at the station, on the truck, and sit until the next incident.

When that same hose sits unused on a hose bed for a couple hours in -30 temperatures, the ice inside it heads for the restrictive tolerances of the nozzle, plugging it completely. Our department had never considered running into this problem before. Once we cleared the incident and returned to station we examined all of our hoselines and nozzles that were not used in the incident that night. There was enough ice inside the unused hoses for this problem repeat itself on more than half of our hoselines.

Winter fire suppression has its own additional hazards, from over-exertion in waist deep snow, to slips and falls on ice-coated surfaces. Since firefighters must use water to suppress fires, it is pretty important to have a complete understanding of where the water (or ice) is inside the hose, where it shouldn’t be, and where it needs to go, when faced with the worst that a Canadian winter can throw at your crew. Make sure your department has planned for every possible winter scenario before temperatures inevitably drop. Until then, have a safe and warm summer. Keep the ice for your lemonade!

James Lindsay is a high school teacher in Lynn Lake, Man. He has served with the Lynn Lake Fire Department for 12 years as a firefighter, captain, and was appointed fire chief in October 2017.