You know the kid: he or she is practically a woven pattern around mom’s leg, peaking out then darting back for cover. When asked a question or prompted to (heaven forbid) touch something, the chin lowers to the chest and the body twists even closer to parental flesh, as if dad will risk his life to protect against . . . a firefighter helmet. 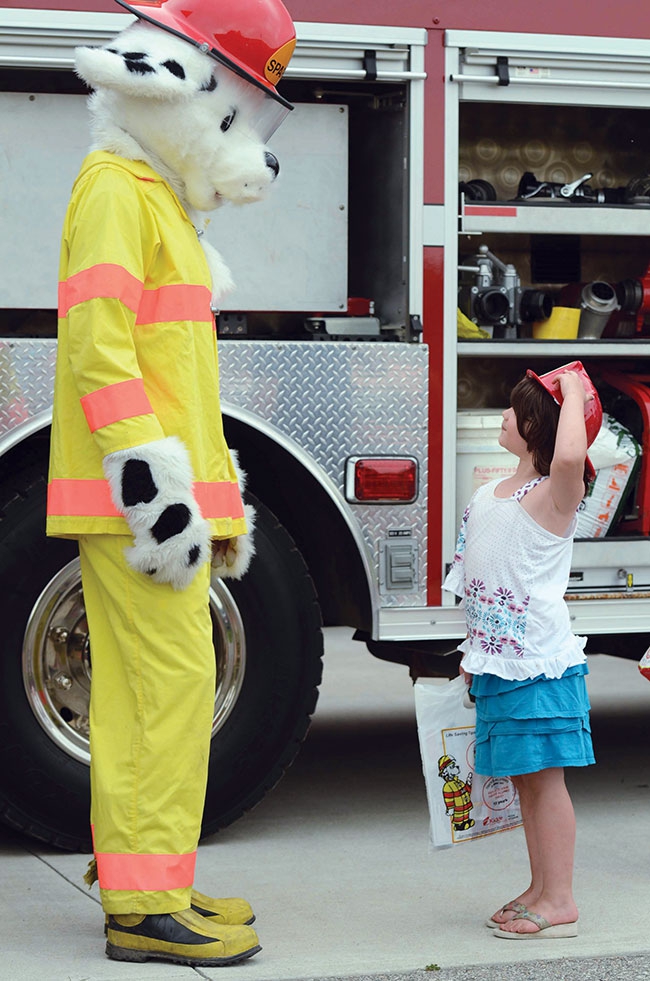 The goal is never for all children to learn absolutely everything Fire personnel often struggle to connect with shy children. As Tanya Bettridge writes

While some kids do have sensory issues – most often you’ll be informed of that either before or when attempting to connect with that child – some kids are just shy. Let’s deal with the latter. The shy kid (TSK), the creature who resembles a small human being, yet somehow manages to capture the essence of the parental-limb boa constrictor.

Often fire personnel will make a few attempts to connect with the child, and then abandon what seems to be a lost cause. You can’t really blame them. After all, especially at busy events, there could be many, many children who don’t require a pry bar to partake in your public-education activities. There could be dozens of kids who won’t hesitate to wear a helmet, sit in a fire truck, aim a hose or even just take the darn colouring book and crayons. There just isn’t time for 10 takes to get the scene right when it comes to TSK.

So let’s explore three effective ways of winning the game of playing shy. Using some different, strategic approaches could result in TSKs coming out of their shells, and maybe even touching that helmet.

Second-hand contact
The second-hand contact approach is basically using the people with whom TSK is already comfortable; these could be parents, grandparents, siblings, other family members, classmates, teachers or friends. In the helmet-touching scenario, hand the helmet to one of those people and ask that person to demonstrate the action. Example: “OK, how about we give mom the helmet and mom can hold it while you touch it? Do you think she would look good wearing it? Let’s see mom put it on. Wow doesn’t she look great! Can you help her take it off? Awesome! It’s heavy isn’t it? Can you hold it up high? Wow! You’re strong!”

You get the point. TSK is comfortable with mom – or any of the comfort-zone people mentioned earlier – and is used to being introduced to new things by her rather than by a complete stranger. You need not fret about the comfort-zone person being a good sport; most of those people don’t enjoy dealing their child’s level of shyness and they want you to succeed in bringing their TSKs out of their shells. Yes, most will even risk the hairdo by putting on the helmet.

Lesser of two positives
I’d bet the farm that every parent knows the lesser-of-two-evils approach and knows it well. If you want a child to choose to do one thing, provide a choice that involves less desirable options. The child still enjoys the opportunity of choice, but the end result is somewhat controlled. In public education, the outcome is that the child learns and experiences something. The goal is never for all children to learn absolutely everything – that goal is unrealistic – rather, it’s more about ensuring each child takes away something positive and at least one tidbit of fire-safety education.

The lesser of two positives is basically giving the child two or more options – all of which involve a positive fire-safety learning experience – and asking the child to choose which one he or she would prefer. After completion of the chosen activity, you can ask if TSK would like to choose to do another. Children are far more likely to do a second activity if their first choice was a positive experience.

As always, it’s handy to have an example. Let’s say the goal is to get TSK to sit in the fire truck. Instead of asking, “Do you want to sit in the truck?” we’re going to make it seem like choosing the intended outcome is the most exciting thing in the world. “See how the truck has four doors and can fit lots of firefighters in it? Everyone gets to sit in the truck, but I’m going to let you choose which door you want to go through and which seat you want to try out, OK? So which one do you want?”

Obviously, the more excitement in your voice, the more enticing the decision is going to be. Equally as obvious, it doesn’t matter which door or which seat TSK chooses, it’s a positive outcome and a far less scary experience.

Get low and go – literally!
Have you ever encountered someone who is a foot, or more, taller than you, or someone whose physical size intimidated you? Now you know how every TSK feels when encountering fire-service personnel. The only way to resolve your height intimidation is to get yourself into a position through which the participants are looking at (or better yet, down to) you. The moment your eyes are even or lower than theirs, TSKs feel big and you’re no longer – or at least less – scary. Kneeling, crouching, sitting, whatever it takes, do it. The moment your stature is pint-sized, you become one of them. This is especially important when you first make contact with TSKs: let them know that you are equals and it will increase the ease with which you and TSK will be able to connect beyond the first introduction.

Winning at the game of playing shy does not have to be a mountainous obstacle. A simple twist in approach can be a game-changer. Turn yourself from a big, scary firefighter into a great fire-safety buddy. The shy kid will make a connection, have a positive experience, and maybe even learn a few fire-safe things along the way. Maybe, just maybe, by the end of the session, two hearts and a helmet will be touched.