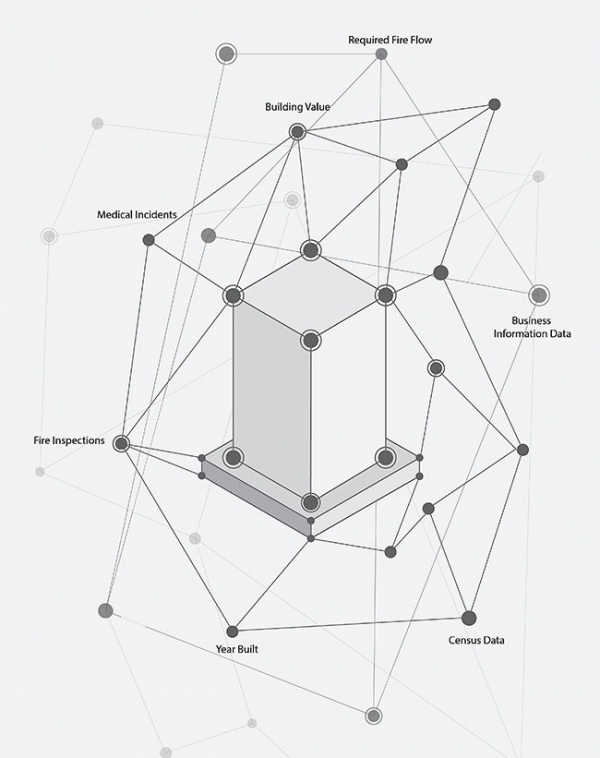 A Building Fire Risk Validation Project was carried out by Fire Underwriters Survey/Opta Information Intelligence in partnership with Vancouver Fire Rescue Service and New Westminster Fire Rescue Service in British Columbia. Photo Credit: Fire Underwriters Survey
In April 2018, a group from the Fire Underwriters Survey (FUS), which is operated by Opta Information Intelligence, partnered with Vancouver Fire Rescue Service (VFRS) and New Westminster Fire Rescue Service (NWFRS) in British Columbia to test building fire-risk prediction and risk assessment methods.
The models performed well, with approximately 70 per cent of fires identified for the 2017 period. Re-prioritizing fire inspections based on the model outputs showed that, for the City of Vancouver, the percentage of severe violations discovered increases from 15 to 47 per cent in the first 25 per cent of inspections for the year.Similar to other building fire-risk prediction models used by the New York City Fire Department (NYFD), Atlanta Fire Rescue Department and Pittsburgh Bureau of Fire, these models can be used to better identify buildings at risk of fire and prioritize fire prevention inspections.

In Canada, similar to the United States, fire codes are enforced through fire prevention inspections conducted by fire department personnel. In certain provinces, changes are happening with fire-related legislation where a municipality will be tasked with completing a risk-based approach to providing fire-protection services.

What is the best approach to completing a risk assessment for prioritizing fire prevention inspections?

Consider an approach to a fire-risk assessment. The buildings to identify are those at most risk of fire.

Generally, an experienced firefighter can tell which buildings pose a higher risk of fire. Factors such as building age, building occupancy, type of business, previous violations and incidents, location, demographics and socio-economics, would all be expected to contribute.

Most often, these features can be found in various municipal datasets. The problem is that the municipal datasets are not readily accessible, and the data is rarely in a useable format. Other datasets related to demographics and socio-economics may be in datasets outside of the municipality such as census data. The issue becomes one of data aggregation.

Once all the data is aggregated the second issue relates to how each feature should be weighted to arrive at a final risk score.

The models we built with VFRS and NWFRS were informed by recent work in predictive modeling of building fire risk completed in New York City, the City of Atlanta and the City of Pittsburgh. In all three U.S. cities, a data-driven, risk-based approach proved to be better at targeting risks than previous practice.

We wanted to validate the results to building fire risk assessment by completing similar risk-assessment-based prediction work for two municipalities in Canada. We invited two cities to participate based on population size. Could a data-driven, building-based risk assessment better prioritize inspections in both these municipalities?

Both the VFRS and NWFRS projects took the following approach: data extraction, data cleaning and merging, feature engineering and modeling, and results.

The influential features and weights differ for both cities.

The model provided a map of property fire predictions in inspectable properties for 2017 and where the property had a fire in 2017. The City of Vancouver has a grouping of fires and predictions in certain areas. In the City of New Westminster, the actual fires are more dispersed. There are good predictions in both cases.

Using the model results, we assign a risk score to each building in both cities and then re-order the inspections for 2017, targeting the highest risk first.

A similar impact is seen for the City of New Westminster. A subset list of severe violations was not available for the New Westminster data. However, looking at all violations the increase is from 18 to 34 per cent.

Overall, implementing a fire-risk prediction/assessment approach shows that, for the year 2017, more violations (and severe violations) would have been identified earlier in the inspection year. This is similar to the impact seen by NYFD using its risk-based inspection system.

This report further validates building fire prediction methods in a comparison study of two municipalities/fire departments in Canada. We would recommend this approach to any sizable municipality looking to create a risk-based approach and drive insights from municipal data in order to better target inspections.

We demonstrated in the report how machine learning can contribute to improving the provision of public fire services using existing municipal data and data exchange processes.

The FUS team is now looking forward to the next stage and implementing live models.

Robert McGuinness, P.Eng., PMSFPE, is technical director at the Fire Underwriters Survey in Burnaby, B.C., a national organization that provides data on public fire protection for fire insurance statistical work and underwriting processes. A summary of the recent survey can be found at www.fireunderwriters.ca. Contact Robert at robert.mcguinness@scm.ca.