On March 12 and 13, firefighters from 10 Fraser Valley departments in British Columbia took part in an exercise that will shape the standard by which first responders deal with Class 3 flammable liquids delivered by rail in Canada. 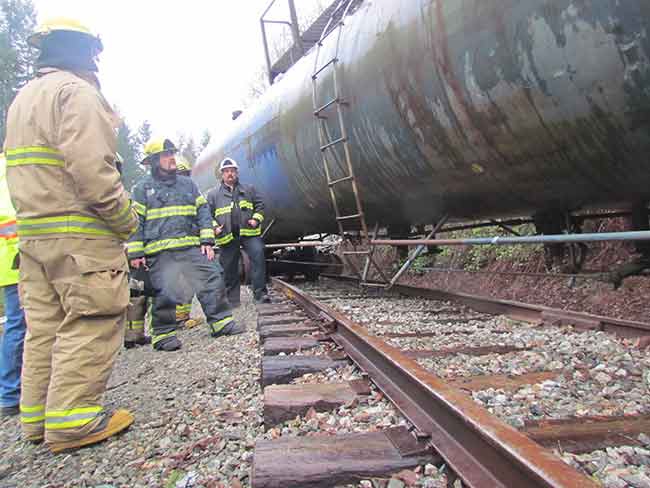 In March Firefighters from 10 Fraser Valley departments in British Columbia took part in an exercise in March that will shape the standard by which first responders deal with Class 3 flammable liquids delivered by rail in Canada. By Tom DeSorcy

Transport Canada, along with Defence Research and Development Canada (DRDC) – an agency of the Department of National Defence (DND) – conducted Exercise Vulcan, a pilot training exercise that will lead to improved response capabilities in the event of an incident involving a train carrying flammable liquids, such as crude oil.

Change often comes as a result of lessons learned from horrific and tragic events. Lac-Megantic Fire Chief Denis Lauzon, who was a presenter and observer during Exercise Vulcan, said the July 2013 derailment and explosion that decimated his town and killed 47 people, will pass three generations: “Those who lived it, those who will hear about it and those who will learn by it.” On a weekend in March, more than 40 firefighters got a jump on that learning.

My involvement in Exercise Vulcan began in November 2015 when I was invited to take part in a tabletop event in advance of what would become a full-scale exercise. In the room were representatives from Transport Canada, DRDC and the Canadian Safety and Security Program (CSSP), as well as members of the Saint John Fire Department in New Brunswick. Everyone had gathered with a focus on a train-derailment exercise involving Class 3 flammable liquids in a small community such as Yale, B.C., with a population fewer than 200. While participants were told this tabletop would be the precursor to a much bigger exercise, little did I realize just how large and involved the event would be, nor did I understand the impact the exercise would have on the responses to flammable-liquids incidents for fire services across Canada.

Derailments involving flammable liquids, fortunately, do not happen every day, but the knowledge gained through this exercise will change the way fire departments respond to these types of incidents and give smaller departments the confidence to be able to handle them, knowing that resources are available, and that they are not alone.

Prior to attending the March exercise, participants were required to take part in a telephone interview that gauged our knowledge of flammable-liquids responses. The interview was followed by a two-hour, interactive, online training session (access in English at rail.capp.ca/en/index.html and in French at rail.capp.ca/fr/index.html) about dealing with incidents involving flammable liquids. The live portion of the exercise concluded with another evaluation to measure participants’ new levels of knowledge to help Transport Canada change the course structure and content to fit into a weekend setting, and not overwhelm the participants. Organizers stressed that we were not being evaluated individually – rather we were contributing to the overall picture of the level of awareness.

Saturday began with a presentation by Chief Lauzon, followed by information from hazmat specialists from CN and CP, along with some industry experts who explained how do deal with derailments. The original plan was to have two scenarios with two groups rotating through each one, but with additional participants – and therefore a third group – a trade show of sorts was added, comprising of industry partners and private hazmat companies. Saturday afternoon, each group toured the two scenario scenes and industry reps demonstrated their equipment and tools.

Sunday, the three groups rotated through two live scenarios: arrival on scene of a derailment; and a pool of liquid on fire near a tank. Responders had radio contact with a “dispatcher” and “specialists” to offer resource information. The third scenario was a debrief of sorts – a post-scenario interview.

Hope, B.C., firefighter Dave Hick said the exercise was broader and more valuable than he anticipated.

“I was expecting a deployment exercise but I was really blown away to get the knowledge and experience from the [subject matter experts],” Hicks said. “Having the chief from Lac-Megantic there really helped drive home how important the training [Transport Canada] is developing will be, and I was thrilled to take part in it.”

For me, the exercise was eye-opening – a bit different than simply putting the wet stuff on the red stuff. We were taught the importance of non-intervention – neither an offensive nor defensive attack, but not putting water on the fire right away, as structural firefighters are trained to do. We were taught to first cool the tanks and then apply foam while considering the runoff of the possibly contaminated water and the impact on local infrastructure, such as drains and water-treatment plants, or the environment.

Not only was the exercise a learning experience for firefighters; it also gave organizers a better understanding of just how much the fire service knows about flammable liquids, and where gaps exist. For Transport Canada, the most significant aspect of the exercise was to gauge the existing knowledge and capacities of firefighters to determine the standard level of hazmat training and the type of response that can be expected mostly in rural areas.

For better or for worse, fire departments have become all-hazards response agencies, and while they try to deal with every possible incident, there are times, particularly in the volunteer sector, when we become overwhelmed. In the case of incidents involving railways, some very serious steps have been taken since July 6, 2013, to better regulate the transportation of dangerous goods; post-Exercise Vulcan, a standard will be developed for first responders to deal with these types of dangerous incidents.

The training facility was the Maple Ridge campus of the Justice Institute of British Columbia (JIBC), located about 60 kilometres east of Vancouver. The facility houses more than a dozen firefighting props, including the largest static train-derailment prop in Canada, according to retired Maple Ridge fire chief Peter Grootendorst, who is the director of the fire and safety division at the JIBC.

“The exchange of information and the training and evaluation of new techniques was excellent and was valuable for everyone involved,” Grootendorst said.

“The exercise was also a meaningful opportunity to evaluate existing standards and protocols.”

Louis Marcotte, chief of response operations for the transportation of dangerous goods with Transport Canada, explained the ground-breaking nature of the exercise – the change of culture in teaching the TASC response concept to structural firefighters: timely, appropriately, safely and co-ordinated.

Marcotte said Transport Canada is working to improve outreach to emergency responders and raise awareness of the Emergency Response Assistance Plan (ERAP) program (www.tc.gc.ca). Marcott explained that Transport Canada has several remedial measures specialists (RMS) who will arrive on site to help responding fire departments with knowledge of the product and assist in remediation of the incident while keeping local fire officials in charge and working under unified command. Marcotte also said CANUTEC (Canadian Transport Emergency Centre) is a phone call away, and while firefighters carry the Emergency Response Guidebook, a call to CANUTEC initiates the ERAP and the response.

Although the ERAP dates back to 1979, many participants – me included – had never heard of it until the table top exercise. Marcotte said that although the ERAP has evolved and information about it is readily available, Transport Canada and other agencies need to ensure that awareness of the program reaches smaller communities.

Ibralima Sow, manager of exercises and programs/emergency preparedness with Transport Canada, emphasized that it’s important for first responders to realize they can quickly and efficiently seek help when dealing with flammable-liquids incidents and that significant resources – including government, the railway company involved in the incident, industry and contractors – can be “brought to bear to support them,” although local first responders remain the authority having jurisdiction.

For participants in Exercise Vulcan, it was evident that first response to a rail incident is a big learning curve for structural firefighters.

It has been almost three years since that tragic day in Lac-Megantic, and the town slowly recovers. Chief Lauzon said there remains a certain tension in the community whenever a “black tanker’” that may contain crude oil rolls through town. It will, the chief said, be a long time before that memory fades.

The fact that representatives of government, industry and first-response agencies gathered in a rural training facility to help shape the standard by which the rest of Canada will be trained to deal with dangerous-goods events is indicative of the commitment to change, as is the recognition of the capabilities of the first responders and the provision of tools to deal these incidents.

While there have been regulatory amendments for shippers and carriers of dangerous goods, Exercise Vulcan is the first step toward changing and improving the way first responders deal with flammable-liquids incidents.

Participants in Exercise Vulcan took away the need for a sight survey or scene assessments before rushing into an incident. Learning from the experts also develops a network of responders; in small or rural towns and cities there are only so many of these experts in the area, so the networking aspect of the exercise is crucial.

Representatives of fire schools in Quebec and Ontario attended the exercise as observers to determine how they will participate in the development of the program in their provinces. The goal is to create one program for use by responders across Canada rather than sending firefighters to costly United States-based programs.

Tom DeSorcy became the first paid firefighter in his hometown of Hope, B.C., when he became fire chief in 2000. Originally a radio broadcaster, Tom’s voice could be heard in the early 1990s across Canada as one of the hosts of Country Coast to Coast. Tom is married with two children and enjoys curling, golf, cooking and wine-tasting. He is also very active with the Fire Chiefs’ Association of B.C. as communications director and conference committee chair. Email Tom at TDeSorcy@hope.ca and follow him on Twitter at @HopeFireDept