At 11:27 p.m. on Aug. 29, 2006, the Kelowna Fire Department dispatch centre received multiple 9-1-1 calls reporting a fire on the roof and top floor of the Landmark II building. Three engines, two ladders, a command unit, two safety officers and an assistant chief were dispatched - a total of 16 personnel - which is standard for a report of a structure fire. 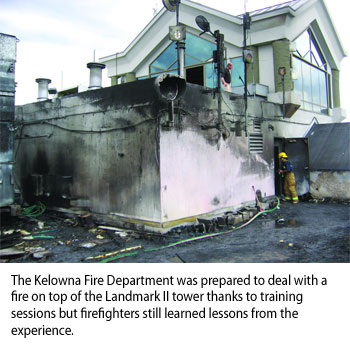 At 11:27 p.m. on Aug. 29, 2006, the Kelowna Fire Department dispatch centre received multiple 9-1-1 calls reporting a fire on the roof and top floor of the Landmark II building. Three engines, two ladders, a command unit, two safety officers and an assistant chief were dispatched – a total of 16 personnel – which is standard for a report of a structure fire.

The Kelowna Fire Department responds to more than 7,700 incidents each year but this was to be its real initial test of abilities on high-rise fire fighting. Until the Landmark fire, the department had never experienced a significant fire of more than three or four storeys.

The Landmark II is 11 storeys high and is part of a group of five Landmark commercial office buildings. Tenants at Landmark II include dentists, lawyers, a coffee shop, a men's clothing retailer, investment companies and a bank headquarters. The centre-core style building is of Type I construction, was built in the mid 1990s and is equipped with a monitored alarm system, fire elevators, standpipes, sprinklers and a fire pump.

The fire was visible from Station 1 as I turned onto Highway 97, five blocks away. I called dispatch and reported heavy flame and smoke and advised the dispatcher to initiate our protocol for call-back and paid-on-call reserves.

The fire was on the roof and appears to have been caused by someone disposing of a cigarette in a garbage can on the roof deck, where occupants go for coffee and lunch breaks.

The fire involved about 1,200 square feet of wood decking, 3,500 square feet of torch on roofing and foam insulation, the roof-top HVAC unit for the building and a stockpile of outdoor Christmas decorations. It took five firefighters with two 1.75-inch hand lines, equipped with 175-gpm nozzles, about 10 minutes to fight their way onto the roof from the roof-top door and knock down the fire. It also took 45 members to support the actual fire fight.

Three years before this fire, the Kelowna Fire Department training branch identified weakness in our ability to fight a high-rise fire. At about the same time, the department was re-introducing members to Incident Command System and getting back to the basics on philosophy, terminology and holding the line on people who chose to deviate from the standard. Personnel accountability, RIT, and span of control were the main focuses and the message was that if skills aren't used every day at grass fires or house fires, then firefighters won't be prepared to use them at a huge event like the Landmark II blaze. At that time, the Kelowna department evaluated its methods, tactics, training and equipment and invested time and money to give firefighters top-quality gear (not cheap plastic nozzles). The department developed scenarios and practised in a city-owned parkade so member could try different methods and get to understand "reflex time" – the time it takes to get off the rig to put water on a fire. In the Landmark II fire the reflex time was probably 10 minutes, which is not bad when you think that firefighters had to load up with hoses and air bottles and climb 12 storeys in bunker gear before going to work (keep in mind that in August in the Okanagan Valley the temperature can hit 40 C!)

Lessons learned
Our preparation and consistent review paid off. The Landmark II fire was the best thing the Kelowna Fire Depart0ment could have hoped for when it came to our first real test of high-rise fire fighting. The fire was on the roof with no occupants above the fire. A fire of this intensity on the fifth floor would have been another ball game entirely. We would have required 100-plus people and it likely would have involved mutual-aid companies.

Other than the Okanagan Park Fire in 2003, this was the first incident in which Kelowna firefighters needed to go higher than the division/group supervisor level in the ICS. This incident required operations, logistics and planning section chiefs to ensure our span of control was manageable.

This type of incident – in a remote location – requires a lot of personnel to support the actual fire fight. Like they say, for every soldier in the trenches there are three to four more in the rear ensuring he has what he needs to do his job.

The building's standpipe system was NFPA compliant and the Kelowna attack teams deployed two, 200-foot, 1.75-inch hand lines complete with 175-gpm, 75-psi break-apart nozzles that give firefighters the ability to go with a 15/16-inch smooth bore nozzle rated for 175 gpm at 50 psi. This equipment is in prepackaged horseshoe hose bundles with nozzles, wedges, wrenches, wye, chalk, markers etc., in a bag. Without prepackaged equipment to "grab and go" there would have been a lengthy delay in the initial attack.

Kelowna's fire prevention branch is working with the city's building/inspection and planning departments to better prepare occupants and firefighters for this type of incident. Like other cities, Kelowna is looking for equipment caches in high-rise buildings, video surveillance cameras in the hallways that can be monitored at the fire-alarm panels and additional communications equipment on site to ensure our radios work in the buildings.

This fire gave the Kelowna Fire Department valuable experience for the next time and gave our members confidence in their abilities to combat this type of fire. At the command level, we felt good about the effort made by all and we know that our accountability and incident-command system works The Landmark II fire was a high-profile event that brought a lot of attention to the issues associated with building UP and the department got $1 million worth of free public education out of this event, which we're still pushing today.