Equipment
Into the Future

Technologies in the fire service are always evolving and manufacturers are constantly researching and developing fire service innovations, often based on the input of firefighters who are on the front line. 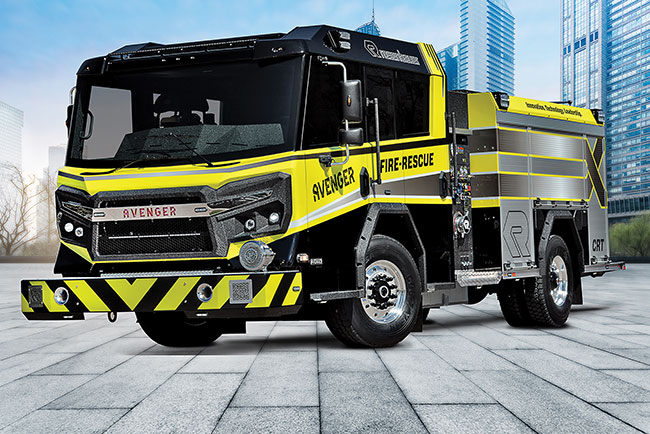 They’re also developing apparatus that addresses community-specific needs. Like firefighters, vehicles in a department must be equipped and come fully-stocked to handle all types of scenarios.

Take several of North America’s apparatus and equipment manufacturers, for example. All of them have been tirelessly seeking to improve on their technologies and equipment to continue providing Canadian fire departments what they need to be the best they can be.

■ New Apparatus and Trucks
Fire truck apparatus and emergency response vehicle manufacturer Rosenbauer America introduced a new fire chassis last year, named the Avenger. It is a chassis designed around firefighter needs, safety and durability, but one that is also outfitted to help people when arriving on a scene.

“The aggressive new look, inside and out, is a fierce competitor,” said Louise Jacques, marketing co-ordinator for Rocky Mountain Phoenix, in a release.

Jacques spoke with Rosenbauer about the new apparatus body.

“The infinitely adjustable crew seating allows for an easily configured crew area, with the ability to add and remove seats to meet the fire department’s changing needs,” she said.

Jacques added that the extreme-duty interior has no plastic and features an aluminum rear wall and aluminum dash and engine tunnel for durability.

She commented on the ride and handling, improved driver’s area, industry-leading hip room for the driver and officer and said the new Avenger interior is comfortable while also providing safety.

The Avenger is available in Rosenbauer apparatus bodies, EXT, FX, CT and CRT, which are custom-built to a fire department’s unique specifications.

The Guelph Fire Department recently added a new $740,000 pumper from Rosenbauer America called the Avenger. The truck looks like something from the Transformer film series by the same name.

The futuristic-looking truck is already getting some looks. It has a sleek look, comes with a tighter steering radius and is shorter from front to back.

The Avenger truck has a 360-degree camera system, 20 to 25 per cent more storage space, and enables the department to get into smaller areas within the community which are becoming more common due to intensification. It can hold an extra 1,000 litres of water compared to other pumper trucks.

Several other fire apparatus manufacturers continue to make waves in the industry.

One of those is Fort Garry Fire Trucks (FGFT). The company has been developing its new Bronto F 116RLP+ demo unit for the past several months. FGFT is a North American distributor, providing sales, service and parts of Bronto Skylift aerial platforms.

Bronto Skylift has been in operation since the 1950s and develops truck-mounted, hydraulic platforms. Both Bronto and FGFT state on their websites they engineer equipment for extreme conditions.

■ New Equipment
Rosenbauer America introduced the option of aerial outrigger operation with a wireless radio remote control this year. The new feature allows the operator to operate the outriggers, aerial and water monitor from more than 300 feet away.

The wireless radio remote control has soft-touch controls. An aerial information screen provides information on items such as remaining extension, aerial angle, aerial rotation, load gauge, breathing air and battery life, and has an auto-bedding function and emergency stop and is water resistant.

While the system has not yet been approved under Federal Motor Vehicle Safety Standards, the features are indicative of the future and what fire departments might see on future generations of trucks.

The Orlaco MirrorEye provides clear vision of all traffic in the vicinity, a larger field of view and an automated panning function. Two high-definition cameras placed on either side of the cabin provide the driver an optimum view of others on the road alongside the truck or at an acute angle behind the truck through a split-screen monitor placed in the window sill.

The MirrorEye increases vision when a driver needs it with a night-vision function that provides a better view of surrounding traffic at night. The automated panning function automatically adjusts the cameras when turning or reversing, providing drivers with superior visibility. The MirrorEye also eliminates the need to adjust mirrors to reduce glare at sunrise or sunset.

■ Aesthetics
As important as it is to focus on new features and updated technologies for trucks, design and overall aesthetic can come into play too.

Seeing new deliveries with artwork, logos or decals on them is not a new trend. Almost every fire truck comes decorated with a department’s specific emblem or logo on it.

The team at Six Nations Fire & Emergency Services in Ontario took the opportunity to display its culture by having its Confederacy flag added to its trucks.

The department’s tanker was designed with Six Nations traditions in mind when it was delivered earlier this year. The purple and white flag on the front and sides of the truck is known as the Confederacy flag and is a symbol of the Six Nations traditional government. The truck featured other cultural aspects in the form of patterns and designs such as small intricately detailed images in yellow and black trim around the entire truck.

“It’s a really nice truck that we wanted to showcase cultural aspects of our own within its design,” Assistant Fire Chief Crystal Farmer said earlier this year when the truck was delivered.

These innovations and advancements in technology, combined with familiar and new apparatus, provide firefighters the trucks they need to serve their departments and communities with a focus on safety, functionality and durability.