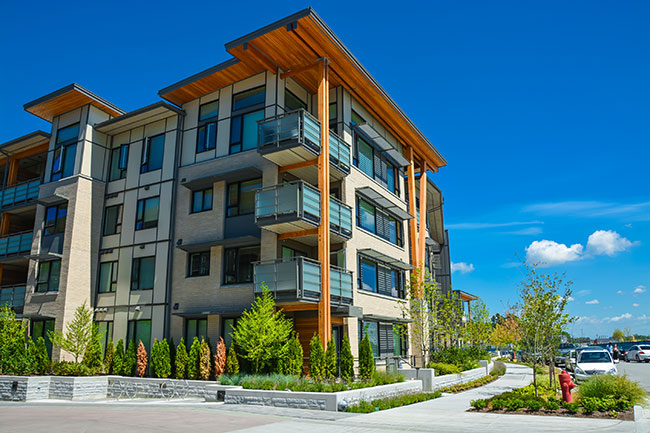 Regardless of building height, the presence of sprinklers and working smoke alarms has a heavyweight role in safety. Photo:Imagenet/Adobe Stock

The presence of sprinklers and working smoke alarms play a larger role in building fire safety than height, suggests a study of 13 years of fire data in British Columbia.

The results may surprise those who equate taller buildings with increased fire safety risk. Not only did buildings with one to four storeys experience more and deadlier fires than taller buildings over the 13-year study period, but the damage and need for fire department intervention tended to decline the higher up in a building the fires started.

Similarly, fires in buildings of any height with working smoke alarms and complete sprinkler protection tended to have relatively low rates of casualties, required less fire department intervention and were largely contained to the room of origin than fires in buildings without those systems.

“When we first looked at the data, the annual rate of fires per building initially seemed to be higher for taller buildings,” noted Chris Biantoro, one of the report’s authors and the strategic planning analyst for the City of Surrey Fire Service in British Columbia.

“We realized we were considering all buildings – from single-family homes to high-rise condo buildings – as a single street address rather than considering the number of residential units inside. When you more accurately count each unit as a home, the relative risk in taller buildings is actually much less because they have better fire protection systems.”

The report was written by Len Garis, an adjunct professor at UFV, associate scientist emeritus for the BC Injury Research and Prevention Unit and retired Surrey Fire Chief; Dr. Joseph Clare, a senior lecturer with the University of Western Australia and former Surrey Fire Service strategic planning analyst; and Biantoro, who has a doctorate degree in operations engineering.

Data for the analysis came from the British Columbia Office of the Fire Commissioner (BCOFC) and BC Assessment (BCA). The number of structure fires (from the BCOFC) was cross-referenced with the number of buildings of a certain height across the province (from the BCA).

To determine the impact of building height, the researchers examined the frequency of fires grouped by the number of storeys – one to four, five to six, seven to 12, and 13 and up – compared with the relative frequency of fire-related casualties.

While the figures are estimates, they demonstrate the importance of considering both height and number of units when considering the relative risk of a building, as opposed to simply equating risk to the frequency of fire calls to a single street address. (For the purposes of the analysis, it was assumed that buildings of two storeys or less contained a single residential unit, and that taller residential buildings had eight units per storey.)

The authors also delved into the data to seek patterns in the heights that fires were more likely to occur in a building. Among the 31,582 fires analyzed:

To bring additional clarity and context, the authors also considered the relative rates of fire protection, extent of fire spread, fire department involvement in controlling fires, and fire-related casualties as a function of building height and level of fire origin. This analysis more clearly showed the trends related to the effects of building height and fire safety protections. Highlights included:

There was also no indication in the data that fire-related casualties increase with building height.

When the researchers turned their attention to the type of fire protection provided in a building, they found the following trends in buildings of all heights:

The researchers also wanted to determine how fire departments across British Columbia responded to fires based on their height and sprinkler status. Surrey Fire Service initiated a self-report survey that received responses from 25 departments of varying size.

In general, the patterns identified in the study were consistent with previous research the authors had conducted – although may not be widely known across the fire service.

“The results underscore the importance of life safety systems in all buildings, regardless of height,” Biantoro said. “We hope this will encourage the fire service to continue to push for complete coverage of life safety systems – ideally both alarms and sprinkler systems – in buildings of all heights, and also to consider historical fire outcomes as they shape their response policies, to make the best use of their resources.”

The study can be viewed at cjr.ufv.ca.


Related
Use data to drive decision-making
Leadership Forum: What legacy are you leaving behind?
Cancer in firefighters: Part 3
Comment: A question of when