For many years, firefighters took pride in the soot that covered their bunker gear, helmets and gloves; it was a sign that they had been to a good job, and evidence that they had been on the front lines of fire attack. As fire prevention efforts paid off and the number of structure fires decreased, fewer firefighters engaged in fire attack; when they did, they were sure to leave all the evidence in place. 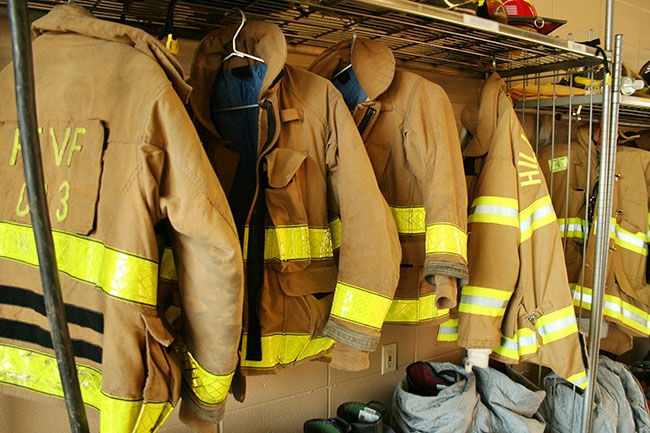 Research has shown that soot from fires contains carcinogenic particles that can penetrate bunker gear and must be properly removed. Editor's pick 2016: No. 10 - Soot on bunker gear used to be a badge of honour. Now

What firefighters didn’t know (or knew and looked the other way) was that the evidence of fire was full of carcinogens; of course, we didn’t think of it that way because no right-minded individuals would knowingly expose themselves to such contamination. Having learned about that soot and the associated health risks, the Haldimand County Fire Department in Ontario developed basic but effective methods to decontaminate – rinse off as quickly and safely as possible, wash bunker gear and personal protective equipment, wash the clothing underneath, and shower right away.

Fortunately, the next generation of firefighters – thanks to the work being done by current firefighters – will adopt these practices and benefit from improved health as a result. For those firefighters who rarely wash their gear and go home smelling like a fire, there is still opportunity to make changes and protect themselves.

Many Canadian fire departments are developing procedures related to firefighter decontamination and hygiene to improve firefighter health and safety. While some departments have adopted elaborate programs, smaller departments, whether staffed by volunteers, career firefighters, or both, can create simple guidelines that will pay immediate dividends.

The Haldimand County Fire Department covers 1,300 square kilometres and serves a population of about 45,000 through 11 stations, with 280 volunteer firefighters. We set out earlier this year to develop a decontamination and hygiene program which, while comprehensive, was also functional for a municipality that utilizes only volunteer firefighters. Buying a second set of gear for each firefighter was not an option, financially, so thorough decontamination procedures for the incident scene and the fire hall were developed and instituted.

A department that wants to develop a program should start where we did – by engaging other departments to find out what they are doing. We first consulted with the St. Catharine’s Fire Department, a career operation that instituted a comprehensive program earlier this year that includes second sets of bunker gear and built-in compartments on its new trucks for transporting contaminated gear. The Niagara Falls Fire Department and the Grimsby Fire Department were also consulted. There are many programs in place and they vary in cost and scope; find out what departments that are similar in size and structure to yours are doing.

The next step, once that research is complete, is to engage front-line staff. In Haldimand County, we engaged our health-and-safety committee members, who formed a small working group to provide feedback. Committee members possess specific knowledge and training that makes their feedback valuable.

With this input, the decontamination and hygiene program focused on the four key components;

To  rinse off as quickly and safely as possible, we developed on-scene decontamination procedures. The key to these procedures is to leave as much of the contamination at the scene as possible and minimize the contaminants that will enter the apparatus and station. To accomplish this, each pumper truck is equipped with a 65-millimetre-hose-to-double-garden-hose adaptor, a garden hose, and a garden-hose nozzle. Each heavy rescue truck is equipped with a decontamination kit containing buckets, soap, long-handled scrub brushes, gear bags for contaminated bunker gear, sanitary wipes, hand sanitizer, and personal protective equipment to be worn while completing the on-scene procedures.

The on-scene procedures, while taking some time and effort, are not complicated and are very effective. A decontamination area is established in a safe location and the decontamination equipment set up. Once a firefighter is finished at the fire, he or she is rinsed off by another firefighter using the garden hose, scrubbed with soap and water, and rinsed off again. This simple procedure eliminates most of the visible contamination. The process is conducted by other firefighters who are wearing proper PPE (mask, gloves, bunker gear), so even though it is being done quickly, it is also being done safely.

Once the gross decontamination is complete, the firefighter begins to doff his or her SCBA, helmet, balaclava and gloves. Once the gloves have been doffed, the firefighter uses hand sanitizer to clean his or her hands, then dons nitrile gloves and uses sanitary wipes to wipe down the face and neck. The firefighter dons an N95 mask and safety glasses and removes the rest of the PPE and bunker gear, which is placed directly into a gear bag for contaminated bunker gear, and sealed.

If firefighters are called out while returning to the station, the apparatus will stop and the firefighters will don their bunker gear. While not completely cleaned, the gear has undergone an extensive gross decontamination.

If the call does not require bunker gear, firefighters can wear  Nomex coveralls if appropriate and in accordance with standard operating guidelines.

While the on-scene decontamination procedures are the most extensive and the biggest change for our department, they have had arguably the most positive impact, as the majority of the visible contamination is left at the scene.

To wash the bunker gear and personal protective equipment, we developed in-station decontamination and cleaning procedures. These procedures ensure firefighters who are properly equipped with personal protective equipment (gowns, gloves, protective eyewear, and masks) remove contaminated bunker gear from the apparatus, keep it sealed until it is in a designated cleaning area, and then wash it in bunker-gear washing machines. Our procedures contain specific instructions for safely and properly washing bunker gear and other PPE.

To support this initiative, the municipality provided funding to increase the number of bunker-gear washing machines and is purchasing forced-air gear dryers to reduce the amount of time the bunker gear is out of service.

While the bunker gear is out of service for cleaning, firefighters who are called out may use bunker gear from a pool of spares, or use coveralls and respond in a support role (in accordance with standard operating guidelines).

Research has shown that soot from fires contains carcinogenic particles that can penetrate bunker gear and must be properly removed.

Initially, we looked at outfitting each firefighter with a complete second set of personal protective equipment and bunker gear. This would enable firefighters to immediately wash  bunker gear and PPE following a call, without the risk that they would be unable to respond to a subsequent call while their gear was being cleaned and dried. While this option still required the purchase of  bunker-gear washing machines, it reduced the urgency of washing the gear. However, the cost for second set of gear and PPE was more than $610,000, an unrealistic expenditure for our rural, volunteer department.

It was decided that a program involving on-scene decontamination as described was good value. The cost to outfit a station with all the necessary equipment was about $30,000 (including both washing machines and both dryers). For the Haldimand County Fire Department, these purchases proved to be a significantly better investment than buying second sets of bunker gear.

The in-station decontamination and cleaning procedures also address the cleaning of other equipment, apparatus and the station; there are detailed procedures to ensure the cleaning is done safely and properly.

To ensure that firefighters can shower right away, nine of the 11 fire stations are equipped with showers and supplied with soap, shampoo and towels. Historically, these showers were rarely used, but with better knowledge regarding carcinogens, firefighters are now encouraged to shower at the station and avoid taking any contaminants home. There are procedures for firefighters who are assigned to a station without a shower to go to a station that is equipped with showers..

Developing a functional decontamination and hygiene program is achievable for any fire department of any size. A functional program doesn’t need to be elaborate or expensive.

There is considerable research regarding firefighter cancer and the benefit of prevention strategies such as a decontamination and hygiene program. One of the best sources of information is the firefightercancersupport.org. This website has an extensive library which includes the NIOSH firefighter cancer study, other research, draft guidelines and other information that will assist a department with implementing a program. For more information on the Haldimand County Fire Department program, contact me at rgrimwood@haldimandcounty.on.ca

Rob Grimwood is the manager of emergency services/fire chief for Haldimald County, Ont. Prior to coming to Haldimand County, Rob was a firefighter with the Toronto Fire Services, a volunteer firefighter/officer with the Niagara-on-the-Lake Fire Department, and a paramedic with the Regional Municipality of Niagara. Contact him at rgrimwood@haldimandcounty.on.ca