Features Training
Back to Basics: March 2015

The presence of other moving vehicles makes emergency-response operations on roadways and highways extremely dangerous for the crews on scene. Firefighters have been injured and killed by distracted or intoxicated drivers while responding to motor-vehicle collisions or other emergencies on highways.

In Ontario, the Fire Service Advisory Committee on Occupational Health and Safety issued a Highway Traffic Control guidance note in 2003 that seeks to protect firefighters on highways and roadways. The guidance note recommends, among other things, that departments use apparatuses or other available municipal vehicles to block traffic at collision scenes. The committee also recommends that responding firefighters:

Most fire departments in Ontario, as well as other provinces and territories, will send two fire trucks to emergencies on roadways and, on an as-need basis, use one apparatus to block or divert traffic. This is referred to in Ontario as a blocker truck, and is positioned a ways back from the incident (roughly 30 meters or 100 feet) to provide an isolation zone for the work area. The blocker truck acts as a barricade between the incident work area and the collision scene. The truck is positioned at a 45-degree angle in order to deflect traffic around the incident scene. In some situations, the blocker truck may be required to block off the entire roadway and force traffic to come to a complete stop.

Creating space between the blocker truck and the work area also allows for ambulances, police cars and other fire trucks to pull in and away from the traffic. When the incident is located at an intersection, the blocker truck is positioned in order to direct traffic around the scene while still providing protection for emergency workers. More than one blocker truck may be required, depending on the size of intersection. Police can help by directing traffic.

Public works or roads-department vehicles, if available, are beneficial when dealing with a prolonged incident. These large trucks are often outfitted with rear-collision bumper systems and warning lights, and with traffic-direction indicator lights that are able to warn the oncoming vehicles of the need to slow down and merge either left or right. The indicator lights are valuable, particularly when the incident occurs on a high-speed highway.

Most fire trucks have high-visibility reflective chevron markings on the back (see photos 1 and 2), as well as traffic-direction indicator light bars. These two safety devices are proven assets for the protection of firefighters on roadways; they get the attention of drivers and warn them that there is a situation ahead.

If a department does not have access to a second fire truck to use as a blocker truck, then firefighters should use flares and cones to direct traffic during a roadway incident. High visibility is key on roadways and not all traffic cones are built as such. A good way to achieve high visibility is to combine traffic cones with strobe lights or other flashing-light devices.

To determine where cones or flares are placed on the roadway in relation to the incident, firefighters should follow suggested guidelines or local regulations, which are based on the speed limits of specified roadways. In Ontario, the advisory committee recommends that traffic cones not be deployed on highways with speed limits greater than 90 kilometres per hour. (See figure 1 for recommended starting points for traffic cones or flares.)

Another way to maintain high visibility on the roadway is to ensure each firefighter wears a high-visibility vest. High-visibility vests are designed with colours that can be seen from a distance, typically bright yellow or green with reflective striping.

Most structural firefighting protective gear is not adequately outfitted with enough reflective stripping to meet the Canadian Standards Association (CSA) standard Z96-09 for high-visibility safety apparel. Refer to this standard to see what the requirements are for adequate protection. Adding a high-visibility traffic vest will help your department meet the CSA standard.

Be sure to park the fire truck in a spot that allows adequate access for firefighters to all equipment on all sides, and also provides enough protection to the crew without being too far or too close. All personnel should exit the fire truck on the side facing away from the traffic. This means the rear crew members and the officer should exit out of only one door. The driver’s side of the fire truck usually faces traffic so the driver must be diligent when exiting.

Mark van der Feyst has been in the fire service since 1999 and is a full-time firefighter in Ontario. Mark teaches in Canada, the United States and India. He is a local-level suppression instructor for the Pennsylvania State Fire Academy and an instructor for the Justice Institute of BC. He is also the lead Author of Pennwell’s Residential Fire Rescue book. Email Mark at Mark@FireStarTraining.com 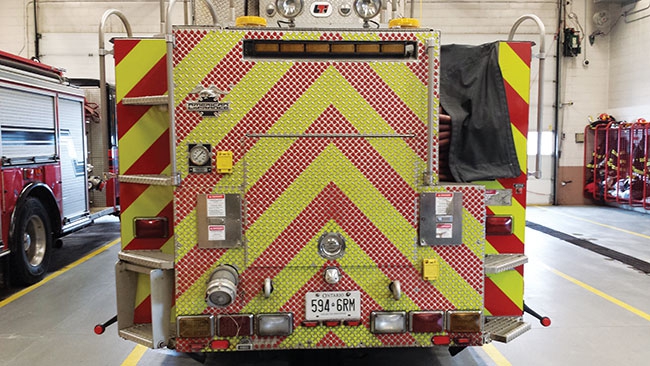 Photo 1: Most engines are outfitted with high-visibility reflective chevron markings on the rear of the truck to draw the eye of potentially distracted drivers on roadways. Firefighters have been injured and killed by distracted or intoxicated drivers while responding to motor-vehicle collisions or other emergencies on highways. Mark van der Feyst shares information to keep your crew safe.
Print this page