Editor’s Note: In 2014, the city of Regina encountered alarming incidences of arson involving children. The December 2017 edition of Fire Fighting in Canada explored part 1 of the story, where fire investigators working with the schools began to determine who might be responsible for the escalating fires. Part 2 examines how the various players worked together to put a stop to it, eventually laying more than 20 charges of arson. 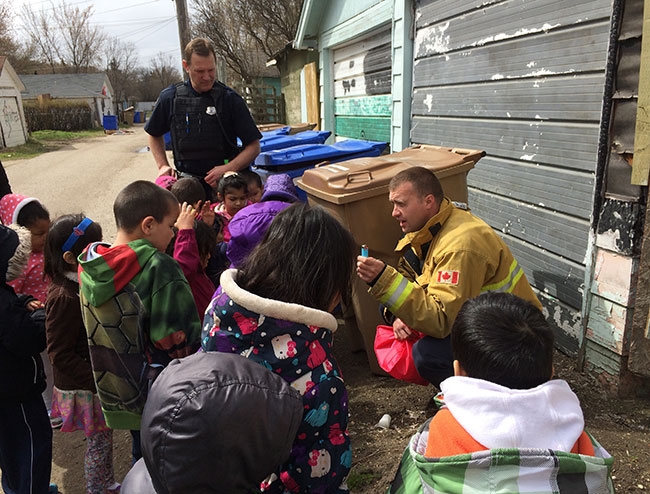 The cases of arson in Regina reached a pivotal point when a family narrowly escaped with their lives after their house was set on fire in April 2015.

The fires were so serious, one of the school principals stated that “someone was going to die.”

The fire department educator, who was part of the school meetings in the fall with the children who talked about fires being set by boys using gasoline, shared this information with the fire investigators. They, in turn, shared it with the Regina Police Service arson investigators. The boys were apprehended and questioned, denied any involvement in this house fire, and released.

Throughout the late fall, information about children and youth involved in setting fires was moving through the schools, the fire department and the police service. There were a number of players involved: schools (principals, community school co-ordinators, teachers, the fire department (firefighters, fire investigators, firesetter intervention program members, public educators), police (school resource officers, arson investigators, community policing officers, officers in the TRiP Program for Children and Youth – The Regina Intersectoral Program, which targets crime prevention for children and youth), and social services.

However, the information wasn’t being captured or shared in any sort of co-ordinated fashion.

The fire department’s two educators and the two fire investigators involved in determining what happened at the April 24 fire talked about how difficult it was to intervene with the fire setting. It was difficult to identify the children involved, and prove that they were setting these serious fires.They talked about the frustration in simply identifying how many players were involved in sharing information about children and youth involved in setting fires, and how difficult it was to share information in any sort of co-ordinated way. This frustration resulted in the suggestion that that various players all get together, marking the beginning of the North Central Firesetters Meetings, chaired by the department as part of the Keeping Our Community Safety Coalition. The first meeting took place on May 21, 2015.

The goal of the group was simple: intervene with children and youth identified by the community as fire-setters to stop the fires.

The second step was to develop and implement a co-ordinated intervention action plan designed to stop these children from setting further fires. The plan included:

The action plan consisted of information sharing and documentation, direct intervention and education.

With the action plan in place, events began to snowball. In early June 2015, police apprehended the two boys implicated in the April 24 house fire again and re-interviewed them, this time with information and evidence from the schools and the fire investigators. On June 4, a 12-year-old boy was charged with 21 counts of
arson. The younger boy was not charged because of his age (10 years), but on June 3, based on the evidence, social services
intervened and placed him and his siblings in temporary care. They provided support to both the children and the parents.

The final step was the provision of firesetter assessment and education programming and support services designed to address the underlying motivators for why the boys were setting fires. These were provided by one of the fire educators through the fire department’s Firesetter Intervention Program, and by the social workers now working with both families as a result of the house fire the boys set in April.

The 10-year-old boy, his siblings and mother participated in a formal Firesetter Assessment, as the siblings were also exhibiting fire-setting behaviours. This formed the basis for education provided by the Firesetter Intervention Program throughout the summer months.

The 12-year-old boy charged with 21 counts of arson and his family also participated in a formal Firesetter Assessment. His education would not commence pending his admitting to setting any fires, and the outcome of the arson charges laid against him in youth court in November. However, the boys stopped setting fires.

The result of these strategies was successful intervention with two families, which culminated in increased safety for two boys and their siblings who were also starting to set fires – six children in total. The ultimate result was a safer community.

The Firesetters Group continued to meet every four to six weeks. At each meeting the group shared and reviewed information about suspicious fires, updated the status of identified fire-setters, and provided information on newly-identified fire-setters. They reviewed the status of the action plan, and developed a new oneto carry the group to the next meeting. A case plan was developed and implemented for each child and youth. Gradually the action plans evolved from direct intervention to community supports and ongoing education.

On June 13, 2015, two youth set three separate fires to a garbage container, grass, wooden pallets and a fence, and materials under the back porch of a vacant house. This last fire was spreading to the roof when firefighters responded, and caused significant damage to the rear portion of the home.

This time, however, information was shared quickly and effectively among the Firesetters Group members. The two youth were apprehended that evening, and each was charged with three counts of arson.

The community is a small one. Word about the intervention actions by police and social services spread quickly and acted as a strong deterrent to other children and youth being drawn into fire-setting behaviours. The message was clear: fire-setting would not be tolerated.

By the end of June, house fires set by children stopped completely and garbage fires – an indicator of entry-level child fire-setting activity in the community – declined sharply and stayed low throughout the summer.

On July 10, members of the group met with the Youth Court Prosecutor to provide context into the unusual severity of the fire-setting behaviour exhibited by the boy charged with 21 counts of arson, and how dangerous this behaviour was not only to his own safety, but for the safety of the community. Youth arson is not a common issue in Regina.

The action plan initiatives continued throughout the spring and summer and into the fall. The strategies began to evolve from reactive intervention to proactive prevention. The Firesetters Group continued to monitor the children and their progress, and any fire activity in the neighbourhood. There was very little information coming from the community about any other children setting fires. There was also very little fire activity. The fire-setting was declining.

■ The aftermath
The younger boy was reunited with his parents and his siblings six months after being placed in care. He is attending school regularly. He no longer sets fires.

The older boy appeared in Youth Court on Nov. 24, 2015 and pled guilty to setting multiple fires over a four-month period, including the fire on April 24 that destroyed the home occupied by the family who escaped. The boy was sentenced to 18 months probation and 50 hours of community service. Importantly, he would be supervised by a youth worker during the probation period, and was required to attend school, follow a curfew, participate in the Youth Firesetter Intervention Program, have no matches or lighters in his possession at any time, and have no contact with the co-accused boy.

■ Getting in front of the problem: Education that works
In early 2016, staff from the schools, Regina Fire & Protective Services and the Regina Police Service began meeting to develop a safety program for elementary school students in the community. Teaching the students about the real consequences of setting fires in their community and stopping fire-setting behaviours before they began were key components.

The safety program developed throughout the winter consisted of four components: Consequences of Fire Setting, Fire Survival, Safety Walk for Pre-Kindergarten and Kindergarten students and families, and Positive Decision-Making Safety Issues Unique to the Schools (Bullying,Vandalism, Substance Abuse, Self-Harm). The program was delivered to the grade three to eight students in the four community schools.

The Consequences of Fire Setting activity comprised 10 real-life fires started by children and youth in the community. The fire and police service members led the groups of students through discussions about fire-setting with a description of each fire and what happened to both the victims and the fire-setter as a result. The situations were real, and were all drawn from the community itself. This meant the consequences were also real and meaningful to the students.

The consequences of playing with matches or lighters formed part of the Fire Survival activity. During the Safety Walks, the students, parents and teachers were led through a discussion on the real consequences of setting fires as they walked past garages and garbage containers that showed signs of being burned.

■ So … what happened?
There was no new information about children setting fires coming forward from students or staff at the schools.

The number of fires set in garbage and recycling bins that spread to structures declined sharply, from eight during the 2014-2015 school year, to three the following year. Most notably, the number of garbage and recycling bin fires, which is an indicator of youth fire-setting activity, decreased sharply and immediately when the Firesetters Group began meeting in May 2015 and put their actions into play.

The incidents went from a high of 22 fires in May 2015, down to record-low levels not seen since the fire department began tracking numbers in October 1999. The fire numbers dropped dramatically in June 2015, and have remained low to this day, even during the typical high fire activity periods in the fall and spring.

Once the groups started meeting, it became clear that when community members work in partnership to share information and resources, and when they bring their various areas of expertise to the table to work collaboratively, it is in working together that they can be remarkably successful.

Without these community-based intervention and education strategies, developed and implemented jointly by the community partners, the fire-setting would not only have escalated in terms of numbers and severity but other children would have started setting fires as well. Ultimately, by working together, the partners achieved their goals of stopping the fires, and creating a safer community.

Epilogue
On May 14, 2017, a mother and three children escaped from a fire set to their home. Within days, investigators from Regina Fire & Protective Services and the Regina Police Service identified and detained three girls, aged nine to 11, who admitted they started this fire in the garage. The fire spread to the home, endangering the lives of the four residents. The girls cannot be charged with arson due to their ages, but were immediately enrolled in the Youth Firesetter Intervention Program. Formal assessments were completed and education commenced immediately.

On Monday, June 17, a vacant home is set on fire. Within hours, fire and police officers and investigators identify three boys who set this fire. The boys – ages seven, nine and 11 – admit to setting the fire. Given their ages the boys can’t be charged with arson, but are immediately referred to the Youth Firesetter Intervention Program.

Angela Prawzick is a public education officer for Regina Fire & Protective Services, who has been with the department for 23 years.

Candace Giblett has worked as a public education officer with Regina Fire & Protective Services for 14 years.