Mental health has changed from taboo to a top priority  in fire departments. In Ontario, the Barrie Fire and Emergency Service (BFES) operates a mental health initiative that aims to create a healthy and supportive environment to benefit firefighter mental health. The program has been ongoing for a year and a half.

The program began with the training of 12 volunteer members to comprise a peer support team. The training, which took from six months to a year, taught the members on how they can support their co-workers and promote mental health.

Barrie’s fire chief, Cory Mainprize, said the team selection process was based on who wanted to volunteer first and also had the qualities needed for the position. The trained team then reached out to their colleagues “slowly and gently” to help them open up more about their mental struggles.

“We really tried to strategically pick champions of the program to have them go first. When we were recruiting members for our peer support team, we wanted to make sure that they were the right people who are resilient and had the capacity to assist other people,” said Mainprize.

Members who went through the testing have learned more about themselves and how they could be “better and stronger,” said Mainprize, adding that some members were willing to volunteer on their own, while others met the program with reluctance.

Besides capital items and salaries, Mainprize said this mental health program has “the most resources they’ve ever committed to any program in the history of this department.”

“When we recognized we wanted to do more, we knew it really had to be driven internally by the peers and invited in by everyone’s colleagues. I think I would say to anybody, if you show me your budget, I will show you your priorities.”

The program’s lead psychologist, Lara Sigurdson, said her main goal is to “catch people early” before their mental health declines further. She said every member, from management, fire prevention, to administration, has the option to get a mental health assessment each year.

“They don’t show up until they’re really sick, maybe five to 10 years into an incident. They lost their partners. They started drinking, or they’re not disciplined in their job. Getting somebody like that back to work takes way longer because there’s way more to get out from under.”

Sigurdson said she formed prevention resiliency training groups, which consist of eight modules that can include 10 members at a time. She aims to catch mental illness at its early stages by doing frequent psychological assessments and therapy sessions. Some of those assessments include trauma treatment, cognitive processing therapy (CPT), prolonged exposure therapy, and work-well assessments that measure distress, anxiety, and depression levels.

The results are then stored and tracked for five years to monitor any sudden changes in members’ mental health. By storing and tracking these results, interventions happen much faster.

“If I’m seeing somebody, and they’re having a nice baseline, and all of a sudden their distress score is through the roof, I can actually have a conversation with them about what’s going on.”

Given the COVID-19 pandemic, Sigurdson said she was struggling to fit everyone into the program, which had “enormous” waitlists. For Sigurdson to support her region, she said she has to treat five thousand people to meet the mental diagnosis criteria alone.

“If they don’t get what they need, they can have a consultation with me, and I will either try to get them into my practice, which has a huge waitlist, or I will find someone in the community to serve them.”

BFES’s mental health initiative has also benefited 911 dispatchers. Joan Farrow, acting officer of the dispatch division, is responsible for teaching her team resilience around people with crisis, but she is also normalizing the ability to talk about bad calls in the workplace. 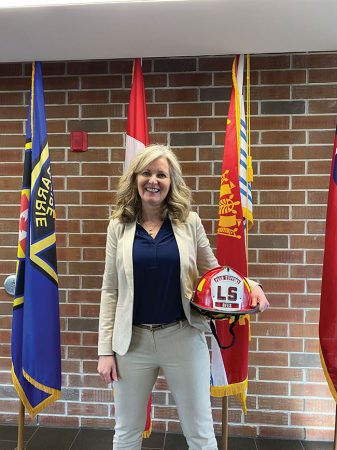 Farrow mentioned that one of the biggest barriers she experienced with checking on her colleagues is their initial resistance to talking about their mental state. She said the new initiative’s goal is not to chase, but to have the help needed readily available for them. Her method revolves around “persistence without aggression.” Farrow said one of these coping resources is an activity similar to an Easter egg hunt within the department to get their minds off difficult calls.

“We have these two little Simpsons figurines that we hide all over the room. Each platoon hides them, and the other platoon finds them so they can hide them again. We send out little riddles about the Simpson figurines. That just keeps us not focused on the calls and the crises going on.”

“I’ve had some conversations with our members who think that anybody who is off on stress has PTSD. We’re trying to educate our members, some key leaders, captains, and platoon chiefs that not every mental health issue is PTSD.”

While PTSD and suicide are major concerns targeted by the initiative, Higgins said he would like to have a focus on a broader range of mental health topics, such as substance abuse. He recounts a ‘great idea’ during a team meeting that can appeal more to the department’s individual needs.

“In our last meeting, one of our team members came up with a great idea of having an anonymous email thread where people can send topics or issues that they want to learn about, and then we can work that into our education.”

While some department members are experienced in providing professional mental health assistance, others with less experience in that field have something of different value to offer: leadership and support. As the president of Barrie Professional Firefighters Association, which represents 175 members, Kevin White’s role is to support and promote the cause, but he said there is much more to his role.

“As the president, I offer time, which is my support. There are administrative people that are running the team and making sure that we have our meetings and our training sessions. I just want to make sure that, emotionally, I’m here for our members not only as their president, but as their peer support assistant and friend to help them with that.”

White said he hopes the program will eventually be expanded to other departments across Ontario.