When facing an out-of-control wildfire, one entirely appropriate reaction is to pray for rain. Humankind has known this since our distant ancestors were first threatened by fire on the savannahs of Africa. We have become a lot cleverer since those early times and though it is still okay to pray, we can now make it rain by means of flying fire fighters. 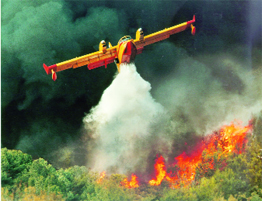 When facing an out-of-control wildfire, one entirely appropriate reaction is to pray for rain. Humankind has known this since our distant ancestors were first threatened by fire on the savannahs of Africa. We have become a lot cleverer since those early times and though it is still okay to pray, we can now make it rain by means of flying fire fighters.

Most volunteer fire departments will, at one time or another, have to deal with a wildfire,  either in forested lands or in the wildland/urban interface. It is a comforting sound to hear over the radio that you have air support, that air tankers or bucket-equipped helicopters will begin operations on your fire.

A major weapon
Aerial fire fighting is not the be-all and end-all of wildland fire suppression. It is, however, a major weapon in the arsenal and highly useful for holding or knocking down a blaze so that ground crews can extinguish it completel. Canada is a world leader in the use and manufacture of aerial fire fighting equipment.

The First World War transformed the heavier-than-air flying machine from a rich man’s toy to the vehicle of the modern era. Governments and private industry were able to get to remote locations with unheard of speed and see the ground over vast distances. The first roles that aircraft played in fire fighting were reconnaissance of the fire and movement of equipment and personnel; roles for which both fixed- and rotary-wing aircraft are vitally important today.

The first water bombers
It was the next world war that provided the technological leap forward in aircraft design and manufacture and lead to aerial fire fighting as we now know it. Early water bombers, such as the Stearman crop-dusting biplane, helped pioneer the use of aviation as a fire fighting tool, but with a carrying capacity of just 680 litres (150 gallons) of water, these aircraft were of use only on small fires in open forest. Former military warplanes, such as large transport aircraft, the flying boats and heavy bombers, had the carrying capacity, power and adaptability to make water bombing an effective tactic. Later, the helicopter opened a whole new world of possibilities.

The largest flying fire engine would have to be the Martin Mars flying boat. Built by the Glenn Martin Aviation Company for the U.S. Navy at the end of the Second World War as a long-range patrol bomber, they were the largest operational flying boats of their day. In 1958, the worst in a series of dry, hot summers on the West Coast, representatives of the British Columbia forest industry, led by the MacMillan-Bloedel Company, got together to consider self-defence strategies due to massive timber losses. Mac-Blo’s chief executive pilot, Dan McIvor, put forward the idea of using converted flying boats as water bombers. They could be fitted out to scoop water from lakes or the ocean on the fly, eliminating turnaround time. Six Martin Mars aircraft had been built, four still flew, and had just been sold by the U.S. Navy as scrap for a total price of $23,650!

The acquisition and transformation of these aircraft is part of aviation legend and in 1959 Forest Industries Flying Tankers was formed. The aircraft were fitted with a 27,000-litre (6,000-gal.) tank with retractable scoops that could catch a fill in 30 seconds. Coming in at 100 knots, 30 tonnes of water is released just above treetop level in a downpour that can saturate up to 1.6 hectares. One Martin Mars crashed in service and one was damaged beyond repair in a storm. Now, the remaining Philippine Mars and Hawaii Mars (all the aircraft were named after Pacific Island groups), continue to fly from Sproat Lake on Vancouver Island and during the forest fire season are available on just 10 minutes’ notice.

Use of retardant
A wide variety of fixed-wing aircraft, from outdated airliners to C130 Hercules, have been used in aerial fire fighting. They all must, however, return to a suitable airstrip, land and refill. This turnaround time is used to advantage by filling up with a fire retardant mixture. This is usually a slurry of water, red dye, fertilizer and other chemicals. The mixture is generally not dropped on the fire as is plain water but rather it is dropped along either side or in front of the fire to deny it more fuel. A savvy Air Boss, (the incident commander in the sky) with skilful pilots and good luck can change a fire’s direction with this tactic. The red colouring allows the pilots to see where the drops have been made.

Use of Class A foam
Class A foam has been used by air tankers since the mid 1980s. It can be used as either a fire control tool or dropped directly on the flames. In the “scooper” aircraft, foam concentrate is carried in a separate reservoir, much the same as a pumper, and after the water has been drawn into the main tank the concentrate is added in a proportion of about 0.4 per cent. When the load is dropped the falling foam/water mixture entrains air and becomes the Class A foam product that might be seen coming from a nozzle. The white colour it leaves is also useful for targeting the next drop.

The only purpose-built fire fighting airplane in the world is the Bombardier CL415. Developed by Canadair in Montreal as the Canadair CL215 in the 1960s, the design has been upgraded with more powerful engines and advanced avionics to carry heavier loads in trying conditions and is now built by Bombardier and designated the CL415. Based on the flying boat designs of the Second World War, its bright yellow and red paint scheme is seen around the world wherever the smoke of wildfires billows into the sky. The CL415 is powered by two turbo-prop engines with a capability to fly in the extreme weather generated by forest fires and scoop water from even a rough ocean surface.

With a capacity of 6,137 litres (1,621 gallons) the CL415 unloads from a height of about 30 metres at 110 knots. This
is the equivalent of accurately dumping the contents of an average fire department water tanker on a fire all at once, with or without Class A foam. And, depending on the distance to the water source, several times an hour. For further information, visit www.canadair415.com or www.aero.bombardier.com.

Command and control
An aerial fire fighting set-up has even tighter command and control than a structural scene. This is because there can be several aircraft flying in proximity, both fixed- and rotary-wing, and a collision would be disastrous. Also, the Air Boss and pilots need to know what’s happening on the ground so as to avoid a “friendly fire” mishap. In the main part of the drop, thousands of litres of water or retardant will hit the ground with a force that can kill or maim fire fighters and destroy fire apparatus. Trees can be knocked over, and branches torn off and sent flying, along with rocks and other debris, ending up some distance from the drop zone. This is the reason for the protocol of not making drops near structures and people as damage is inevitable.

The Air Boss is generally flying in a smaller aircraft, known as the “bird-dog.” This is the aerial incident command centre. The “bird-dog” aircraft generally precedes the water bomber over the target, checking the flight path and sounding a warbling siren. For anyone caught underneath this siren it’s too late to run away; you must take cover and trust your luck because in seconds the water bomber will be overhead and so might a big chunk of water. Conventional wisdom suggests you throw your shovel or other hand tool away, downhill, lie prone, head downhill if possible, hold your helmet on your head with both gloved hands and, again, prayer would be good. W
John Wiznuk is a West Coast journalist and fire fighter with the Saturna Island (B.C.) Fire Dept.