A motor vehicle incident provides inherent dangers to first responders on the scene, but there are ways to mitigate these at the scene. 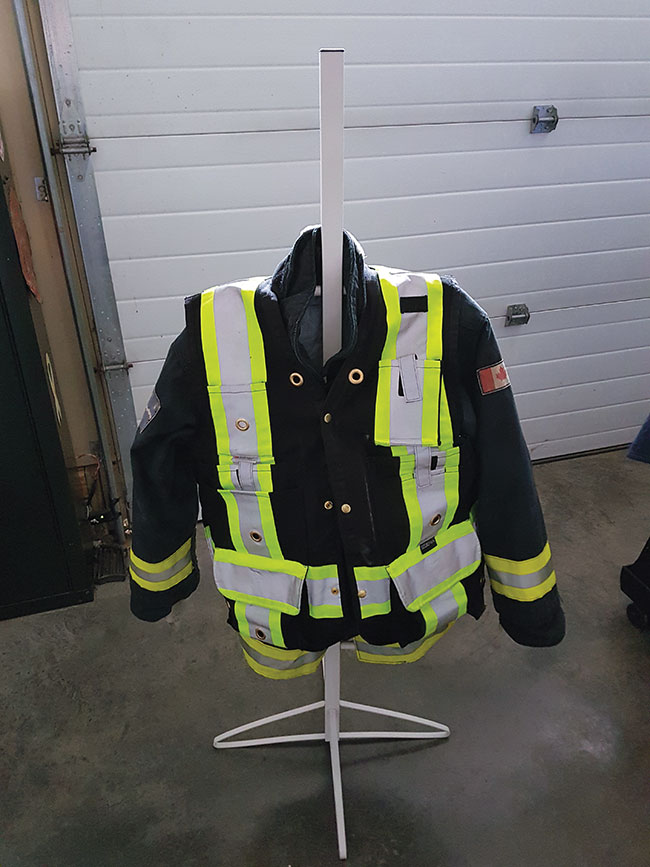 These photos show just how much difference a traffic vest makes in increasing the visibility of a firefighter.

Drivers today face several distractions behind the wheel: high speeds, road construction, and weather, to name a few. Increased technology and in-vehicle cellular devices make drivers more easily distracted. Even with a perfect blend of responsibility and care, most drivers have not lost the one thing that is seldom to be controlled: curiosity.

Attempting to capture the attention of the motorist without overloading their senses is one of the most difficult parts of highway rescue work. It seems every passerby has to look at the scene, even when travelling at high speeds. The government has tried addressing this by promoting speed limit reductions near collision zones and adding hefty fines for violators. These programs have urged drivers to move a lane over and decrease speed in the hopes of gaining the drivers attention.

Sadly, no amount of regulations can replace common sense so it ultimately falls on the responding agency to protect their crews and work space. Increasing visibility of fire on-scene resources, giving ample warning of traffic management measures and promoting partnerships with assisting agencies are all ways to combat unnecessary hazardous conditions caused by the public during roadway calls.

Preparing to respond to roadway calls begins long before the tones sound. With a majority of calls for service involving motor vehicle collisions, having equipment ready before arriving on-scene makes tactical sense. Logically, a priority should be the increased visibility of the responding apparatus. It was not that long ago that fire trucks lacked everything from adequate emergency lighting (think the one cherry light on the roof) to sporting any reflective decals at all.

Thankfully, times have changed. Gone are the days of grey tailboards with no directional markings. Today’s fire apparatus, especially those dedicated to highway response, should have full decaling on the rear of apparatus to increase day and night visibility. Daytime colour schemes of red and yellow are popular and appear to have the most dramatic affect on drivers, while nighttime reflective chevrons enhance the outline of vehicles allowing drivers to better see the dimensions of trucks parked at accident scenes.

Some departments have taken the contrasting colour scheme chevrons and placed them on the front of apparatus, ensuring that, whichever way the truck is parked on-scene, the outline of the vehicle remains highlighted catching the attention of the passing motorist. Side reflective tape, alternating paint schemes (such as red bottom and white top – sometimes called the FDNY paint pattern) have added a staggering look to fire trucks causing them to stand out amongst other highway vehicles increasing their visibility.

Lighting is another component that has changed over the last few decades. The one rotating red light has now yielded way to sharp and bright LED lights with differing colours and sequences. Different colours, such as red, white, and even amber in some provinces, serves to draw attention to emergency responders. That said, drivers almost display a type of “eye fatigue” when constantly being bombarded by too many lights. Care given to the proper placement of scene lighting, curtailing of unneeded emergency lights, is essential. This is especially true at night when flashing lights potentially blind oncoming drivers.

A well decaled apparatus does wonders for visibility but the most important part of any response is the firefighters themselves. New standards have stressed the importance of adding traffic vests to turn out gear on roadway calls. By adding a flag vest to the reflective trimming of bunker gear, a firefighter becomes more visible overall. The next step is ensuring crews actually use them.

The difference reflective vests make to firefighter apparel cannot be understated. Chiefs should purchase the rugged, thicker type of vest, often called a surveyor’s vest, which is made of canvass and maintains shape even in adverse weather conditions such as sleet, rain and wind. Although much costlier than the vinyl ones, firefighters will wear them because they will not impede movement like poor quality vest often do. Safety starts with the individual crew member and emphasis on wearing your vest must occur.

A critical factor in dozens of firefighter fatalities due to secondary collisions is the placement of the apparatus and firefighters mounting and dismounting on the unblocked side. A skilled driver knows to angle the truck in a way to close the lane without projecting too far into on-coming traffic, but just enough to cover the scene and allow rescuers to disembark without being blind against traffic. A good responding practice is setting up advanced warning signs a good distance from before arriving on-scene. This gives motorist lots of time and space to reduce speed move over.

With enough notice given to drivers, focus should shift to establishing the “work zone”. Utilizing a vast array of kit, the rescuers are not only protecting themselves, they are also aiming to provide as much direction to drivers as possible under the circumstances. 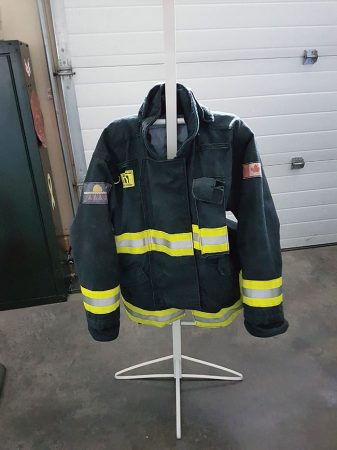 These photos show just how much difference a traffic vest makes in increasing the visibility of a firefighter.

The initial traffic plan consists of cordoning off the area and establishing a perimeter with lots of cones. The trick is to keep the perimeter as tight as possible, preventing confused driver’s from thinking any gap in the cones is an invitation to drive through them. Pulsating electronic flares, directional flashers and temporary barriers all contribute to directing traffic away from the work zone and maintaining that safety “pocket” for rescue workers and victims alike.

The final line of defense when working roadway calls is the flagger. Managing traffic flow is an art. Personnel assigned to flagging duties must have designated training — this is not a spot for new members. Flaggers must be established a reasonable distance away from the scene, again, giving as much advanced warning to on-coming traffic as possible. Ideally, they should be in pairs. A flagger should also be equipped with a hand held sign/wand (reading Slow or Stop), adequate background light, noise emitting device and a working radio. Flaggers are the “canaries in the coal mine” and should know how to raise the alarm if a vehicle poses a danger.

A solid practice is to incorporate the use of law enforcement officers with flaggers when controlling the scene. Police presence makes a significant statement to the motoring public and violating this law has consequences. These officers have unique powers to deal with absent-minded drivers. Fostering these types of relationships is a mark of a strong professional organization that places a priority on safety. By involving agencies that have the authority to enforce traffic laws (something firefighters do not have), interagency co-operation is born.

Some of the most dangerous scenarios faced by emergency responders are operations on busy highways, intersections and roadways. There are numerous challenges to working in these conditions but by being proactive, trained and equipped to deal with these factors, departments can reduce the risk for responders and victims alike.