June 2016 - Fire Chief Colin Shewell and Deputy Chief Roree Payment are the only full-time members of Clearview Fire and Emergency Services in Ontario. The department heads were naturally nervous when they decided to introduce a mandatory annual physical-abilities test for all paid-on-call firefighters. 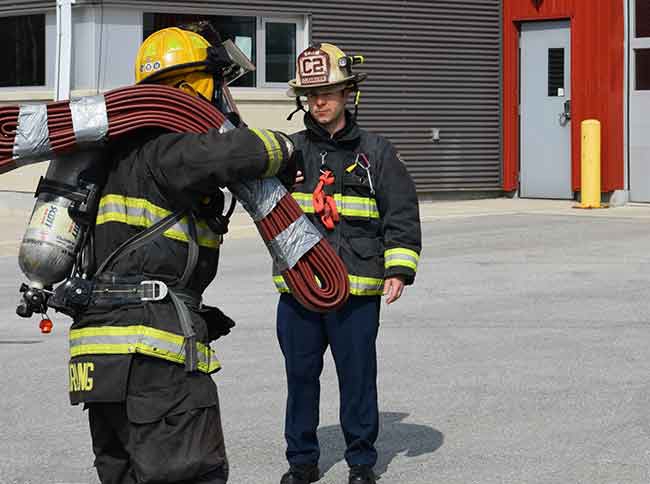 Worries be darned, the chief and deputy were on a mission. In January all 100 or so Clearview volunteer firefighters took the mandatory fitness test. No one quit the department; no one gave up during the test; and everyone passed – albeit some after a second try.

Given well-known mental and physical benefits of exercise, it’s fair to assume the department in Clearview Township – an hour and a half drive north of Toronto – is stocked with happier, healthier, fitter firefighters. How did they do it?

Shewell said he was surprised how well members accepted the physical-abilities test, which is now an annual standard operating procedure.

“I think the reason it was so successful is the way we rolled it out and put it into policy,” Shewell said. “It’s really for the protection of the worker.”

The test Clearview introduced is a version of the physical-abilities test the department uses to hire new recruits. The test, run as a circuit of firefighting tasks, determines a candidate’s ability to carry out certain firefighting duties within a particular time frame.

Clearview’s firefighters had to finish eight test components within 15 minutes – search and rescue, ladder carry and raise, hose pack walk, tool carry, dummy drag, hose advance, forcible entry and equipment haul – wearing full PPE and on air. Payment set the 15-minute finish time based on an average of completion times for the different age and gender demographics in the department. More than 90 per cent of firefighters finished the test within 10 minutes.

Those few firefighters who did not finish within 15 minutes were given options: retake the test on another date that month, accept modified duties and obtain documentation from a doctor to retake the test within six months, or move into a public-education role. All members chose the first option.

“Why they failed had nothing to do with the physical element, it actually had everything to do with their confidence in an SCBA,” Payment said. The demand on a firefighter’s air supply is greater during the test circuit than during a regular training drill due to the high-intensity exercise and added time pressure.

“We worked with those firefighters and they came back and they all passed it the next time,” Payment said.

“The whole point of this testing is not to fail anybody,” he said. “Our end result, if we didn’t fail anybody, that was going to be perfect. If we inspired a few people to be better and to push themselves, we’ve won. And that’s what happened.”

■ Mustering the troops
The test circuit was introduced to Clearview members last year as an addition to regular station training. The idea, Payment said, was to re-familiarize firefighters with the circuit (who would have last completed a similar circuit when they joined the department) and to make it a fun, challenging exercise. In October, Payment visited all five Clearview Township stations to announce that the circuit would be a mandatory annual test.

“Obviously as soon as you throw the word mandatory in there, there is going to be some apprehension,” Payment said.

To help address members’ concerns, Payment and Lt. Kevin Spears created and ran a two-hour training session every Thursday night to give members a chance to practise the circuit. The training sessions were held for six weeks in the lead up to the January test dates.

“Probably 90 per cent of the department came to one of those tune-up sessions or training sessions before the test date,” Payment said. “We tried very hard to expose as many people to it so there were no surprises come test time.”

One Clearview captain voiced some objections about introducing an annual test that would potentially remove members from a suppression role. The captain was respectfully concerned, Payment said, for members who he felt would have issues with the testing. The captain spoke with Chief Shewell and Deputy Payment on several occasions to understand what was involved in the test.

“I asked him to come in to one of those practice nights and I said, ‘Just try it.’ He came in, and he did it, and at the end of it he agreed it’s not that bad,” Payment said.

The next step was to bring in those members the captain felt would struggle with the test. Those firefighters, too, easily finished the practice run and were no longer concerned about the test.

After the testing dates in January, attendance numbers at training nights skyrocketed. For most members, Payment said, passing the test was likely a confidence booster.

“I probably had 30 per cent of the department ask me after the test if we can continue to have those training sessions,” Payment said. “I think that shows how successful it was and how much people liked it.”

Integral to the buy-in from members, Shewell said, is demonstration from leadership. Both Shewell and Payment took and passed the test.

“[A mandatory test] is doomed to fail, especially in a smaller municipality, if the chiefs fail to do it,” Shewell said. “The chiefs have to participate and they have to show their crews that they’re willing to do the physical, just like your new people, your middle people and your older people. That’s the key, being engaged and being involved.”

Incentives can’t hurt either, Payment said. The deputy created a custom plaque to award the station with the lowest average completion time. The playful plaque quotes a line from cinema classic Top Gun: There’s no points for second place.

“It’s a pretty cool trophy; some of my best work,” Payment said with a laugh. Next year the chief and deputy plan to change the trophy qualifications to allow stations to choose their top four or five performers to compete for the lowest average and the prized trophy.

■ Fitness for life
Both chief and deputy stressed the importance of firefighter fitness – both in terms of ability to do the job, and maintaining a healthy body.

According to the 2013 edition of the International Association of Fire Fighters manual on heart disease in the fire service, cardiovascular disease, mainly coronary heart disease, remains the most frequent cause of firefighter line-of-duty deaths in North America. The manual recommends regular aerobic activity and muscle-strengthening exercises to help prevent sudden cardiac events on the job.

“Fire fighting is a zero-to-60 occupation,” Payment said. “The big thing with that, specific to a paid-on-call fire department, is that a lot of our firefighters might have sedentary jobs where they’re not overly physically active, and don’t have the opportunity to be physically active. And we want to make sure that they were all able to perform the tasks that were required.”

Beyond ensuring firefighters’ abilities are up to par, Payment said the test keeps them accountable to some type of fitness regime. Members saw how their fitness levels compared to others and how they can improve.

“A few guys had to retire and we found a lot of high blood pressure and a few heart problems,” he said. “I recommend it to all departments. Nothing crazy just a light reminder annually that this job is tough and we need to be healthy.”

■ Shifting culture
Shewell said the mandatory physical is just one piece of what has been a push for department professionalism. Members are now referred to as part-time, paid-on-call firefighters, rather than volunteers. The department also introduced an attendance policy in 2014.

“With the services we provide, the expectations are that we’re professional and we can do our job well when individuals show up at an emergency scene,” Shewell said. “It’s not so much, ‘Hey, we’re just here to help,’ anymore; we have to have competent, professional individuals who can do the tasks.”

A few volunteer departments have been in contact with Clearview to learn what is involved in creating a mandatory physical-abilities test, and whether or not it would be a fit for them. (Fire Fighting in Canada contacted some chiefs who said they are impressed with what Clearview has done, but preferred to discuss ideas with their members before sharing with media.)

After discussions with Chief Shewell, Tony Mintoff, fire chief for the Township of Tiny Fire Department in Ontario, took what he said is a first, and ideally only, step towards ensuring his volunteers meet physical health standards for fire fighting.

In March, Tiny Fire Department members took home medical clearance forms that list the various tasks, environmental factors and stress factors associated with the job. The forms require a physician’s signature to confirm the patient is safe to perform that job.

“This is breaking new ground for us,” Mintoff said. “There has never been anything like this before in this department, and I thought, if we can come up with something pretty reasonable and somewhat unobtrusive to start with, we’ll get them complying with it and then we’ll go from there.

“If this system starts to help to identify and advise some of these people and we can get a reasonable level of fitness started, then fine, we may not have to be prescriptive about it,” he said.

The chief said he has not heard any negative feedback about the forms from members, which are due in October and will be required every two years. Mintoff points to the Occupational Health and Safety Act as a directive for chiefs to take precautions to protect their employees. Yet, for the 40 or so years Mintoff has been in the fire service, he said fitness programs have come and gone unsuccessfully in volunteer and full-time departments.

“It is not just for us, it’s for them as well,” he said. “I’m not interested in planning funerals for these guys.”

Clearview’s success with mandating a physical test is notable, Mintoff said, and encouraging for other chiefs.