May 2016 - In the 1990s, rural farm-oriented communities began to see construction of large-scale pig barns. Today, these barns often house thousands of animals, and, when full, are all worth millions of dollars. 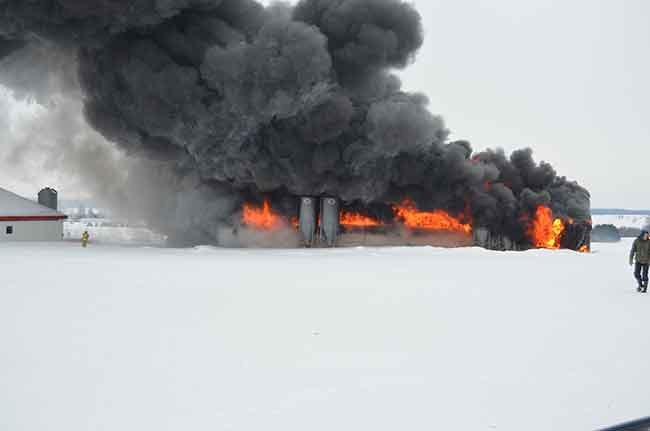 These operations are not only sizable, but are also built using new construction methods. Many of the barns include under-floor manure pits, by which animal manure is drained through the floor and stored for up to 12 months. There has also been an increase in the use of plastics and light-weight construction. Today, grated floors over the manure pit, the pens into which the pigs are separated, and even the lining on some walls are often constructed entirely of plastic components.

As fire-service personnel are aware, if you start erecting lots of new buildings in your fire protection area, it is only a matter of time before the department will be called to fire emergencies within them. Over the past decade, the Fire Department of North Huron in Ontario has responded to a major pig barn fire, on average, every 18 months. In fact, pig-barn fires became routine events for us.

Storing hundreds of thousands of litres of manure underneath grated plastic/cement flooring may result in the release of assorted gases, including methane and hydrogen sulfide, into the barns. These gases create a caustic environment that greatly reduces the integrity of electrical wiring. The gas release is compounded when a ventilation-system malfunctions or when the vent systems are shut down by the farmer. One can easily predict the result of increased gas levels coupled with ignition sources.

Our presumptions about barn fires being typical responses changed on March 4, 2014, when North Huron firefighters responded to a methane gas/pig barn fire at 6:50 a.m. On arrival, methane gas had ignited and the fire self-extinguished; this is not an uncommon occurrence. Arriving fire personnel found no fire, but checked the building for extension, including the attic area. As crews were exiting the building they noticed a couple of light smoke puffs from the attic. Firefighters opened up the gable end of the barn and accumulated gas in the attic area ferociously ignited (this was 46 minutes after first arriving on scene). In less than 60 seconds, the entire barn was gone.

Considering the frequency of pig barn fires – North Huron has responded to three other pig barn fires since March 4, 2014 – we knew that we couldn’t allow a close call such as this to occur again. Chief officers and the fire prevention officer began to look more in-depth into methane-gas barn fires and, as a result, the department has changed how crews operate at these incidents.

■ Treat modern barns as confined spaces
In a search to develop a better response to pig-barn fires, we came across Davis Hill from Pennsylvania State University’s Agricultural Safety and Health Department. Hill introduced us to the concept of treating all barns as confined spaces. Any time our personnel enter a barn for any emergency and there is no fire/smoke present or visible, they carry multi-gas meters, monitoring for oxygen (O), carbon monoxide (CO), hydrogen sulfide (H2S), and methane (CH4). If there is visible fire or smoke, each task group operating in non-fire areas must have a multi-gas meter.

Since implementing this best practice, our firefighters have encountered high levels of H2S as well as methane gas. High-concentration exposure to H2S has hazardous effects on people and can result in a very sudden fatal event.

■ Plastic is not our friend
Many modern barns are full of plastic. For farmers, plastic cleans easily and doesn’t corrode. For fire personnel, plastic significantly increases the fuel load per cubic foot. Additionally, plastic barn floors that have been exposed to fire may show no signs of compromise on the surface, however, the underside may have significant melting/degrading, and therefore is incapable of carrying the weight of an equipped fire crew.

When the burning plastic components of ceilings, walls, pens and floors are taken into account, the combustible load within the smoke is very high. While plastics are an added risk for firefighters, bear in mind that pigs exposed to smoke from plastics will likely not be safe for people to consume. Ultimately, the fire loss in dead or untenable livestock may be as great as or greater than that of the building itself.

■ If a barn is on fire, start out with a defensive attack
North Huron crews learned from experience how quickly a barn can go from nothing showing to nothing left. Had our crews still been inside on March 4, 2014 they would not have made it out alive. Our department’s best practice now is to approach all barns defensively until a comprehensive size-up is done and sufficient resources are available and on scene. If command commits crews to interior fire suppression, in addition to other structure-fire best practices, several criteria must be met.

Risk a lot to save a lot, risk a little to save what’s already lost. In many cases, there is little to gain by an offensive attack at pig barns.

■ Prevention is difficult
The Fire Department of North Huron takes pride in being progressive with our fire prevention. We have met with provincial agriculture officials and engineers, and other fire-prevention officers to discuss the dangers associated with pig barns. Most importantly, we are meeting with farmers, beginning to preplan their properties and building relationships with them so that the first time they have us on the property isn’t during a structure fire. While these actions are not supported by our codes, they make good sense for us and we are being welcomed by many farmers.

The National Farm Building Code of Canada was last updated 21 years ago, and may not reflect all of the changes to modern farm buildings and how they operate. While much research is being done into methane gas build up and release, there are no simple answers. Two identical barns, on the same farm, using identical animal feed for animals from the same breeding stock can have two totally different methane build-up or release levels. Some barns may have methane foam buildup; others no foam at all.

■ Start with what we know is happening
Methane gas is only a risk if it has an ignition source. Many times, ignition is caused by electrical circuits that have been compromised by exposure to other gases released in the barn. Check circuits with a thermal imaging camera to see where this breakdown is occurring. We have discussed the issue of electrical circuits with the Ontario Ministry of Agriculture and Rural Affairs and with farmers, and now, with a cost-effective iPhone app, farmers can affordably check their facilities for signs of compromised wiring. As well, some insurance carriers will provide an inspection service.

In many barns, the under-floor manure will develop a layer of foam over it. The foam is full of methane, and if it is compromised, that methane is suddenly released into the barn. Unfortunately, research has not found a way to safely break down this foam down, nor has its root cause been found. Our department is trying to increase farmers’ awareness of the risk of this foam, and encourage more caution when they are washing out a barn in which foaming is occurring.

We all enjoy the affordable food provided by modern farming techniques, and farms are key to the economy in the North Huron community. We have watched while smaller operations have grown into tremendously successful industrial-sized operations. Unfortunately, their success has outgrown provisions established in the 21-year-old farm building code.

Farmers are the heart of our rural community and suffer incredible emotional and financial loss in the event of a large-scale fire. Fire services need to ensure the safety of our personnel while encouraging best safety practices by the farmers whom we are called upon to protect, within the limitations of the codes and regulations under which we operate. We see tremendous risk in dealing with incidents at pig farms, from methane explosions, to floor collapse, to H2S exposure.

From what we have experienced and learned, we want to make sure that other first responders are prepared and aware of the risks they are dealing with if they get called to this type of farming operation.

David Sparling is the director of fire and emergency services for the Fire Department of North Huron.

James Marshall is a fire prevention officer for the Municipality of Morris-Turnberry and Township of North Huron.