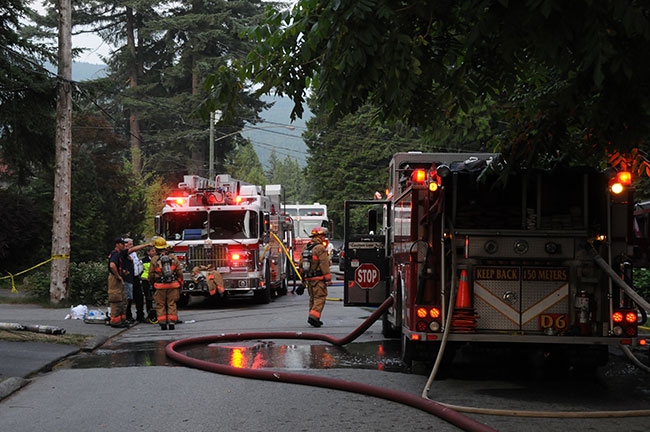 This image depicts the junction of the E2 and E3 sectors just 10 minutes after arrival on scene. Kitchener Aerial 2 platform protects the exposure at the left. Writer Paul Dixon explores how three fire departments on Vancouver's North Shore are creating a safer community through a comprehensive mutual aid agreement.

Over the past century, the three municipalities have followed their own visions as their collective population has swelled from a few hundred to nearly 190,000. Fire Fighting in Canada sat down with the three fire chiefs — recently-retired Chief Victor Penman, District of North Vancouver Fire & Rescue Services; Chief Dan Pistilli, City of North Vancouver Fire Department and Chief Randy Heath, West Vancouver Fire & Rescue Services – to learn about how they are working together to meet the current and future needs of their communities.

As beautiful as the setting may be, these three fire departments have a working environment as diverse and challenging as any in Canada. The community is home to Canada’s busiest seaports, grain elevators, coal and sulfur docks, major shipyards, chemical plants, railroads and some of the most expensive real estate in the world, with a wildland interface the entire length and breadth of the North Shore. Today, automatic mutual aid ensures that the same call receives the same level of response, in terms of apparatus and staffing, with firefighters from all three departments trained and equipped to work together at every step of the way. It wasn’t always this way. Penman describes those rare occasions in the 1990s when multiple departments would be involved.

“Even at those major incidents you weren’t integrated; it was separate operations. Everyone had different turnouts, so you knew they were there, but it wasn’t organized in advance. The call for [additional] help was at the last minute and only for the biggest fires.”

Pistilli started with West Vancouver during the 1990s, “when you just made do with what you had. You would have guys going through four or five air bottles, just completely, completely spent.” One incident in particular sticks in his mind as an example of the mindset of that time.

“There was a fatal apartment fire at the corner of 15th and Esquimalt. I was working on the truck out in Horseshoe Bay. The assistant chief brought in three engines and the ladder, a typical response. Fully involved, fatal, people were out on the decks, on the fifth or sixth floor of a concrete building. We sat out on the highway at Caulfield and listened to the entire call. No additional resources.” On those occasions when additional resources were required, overtime callbacks came before mutual aid requests.

There are many factors that drove the change in philosophy,
as Heath relates, and money is only one consideration. West Vancouver has the highest median price for housing in Canada and the other two North Vancouvers aren’t that far behind, indicates a 2017 real estate study. Commuting is a challenge at the best of times, with rush hour traffic over the two bridges to Vancouver starting earlier and lasting longer. Today, more firefighters live outside of the North Shore than in the past and relying on callbacks for staffing is no longer viable.

“If we were trying to operate the way we did for so many years,” says Heath, “the public would not be getting the service they do now and our firefighters wouldn’t be as safe doing their jobs as they are now. Now we actually have enough staff that we can run a proper rehab for our staff. Now we’re meeting guidelines and WorkSafe requirements. The resources are so deep now that to me you can’t argue the point”.

Communications was the big breakthrough in more ways than one. Originally, all three departments had their own dispatch system. District of North Vancouver had civilian dispatchers, while the City and West Vancouver would rotate firefighters through dispatch. “It was a good transition,” as Chief Heath remembers it, “professional dispatchers and that level of experience made it work.”

For Penman, that was what set the stage for increased collaboration, “because now we finally had a common thread, a common link between the three departments that allowed us to know what was happening on a daily basis.” Today, the three departments are part of the ECOMM 800mhz trunked-radio system, with their dispatch service provided by Surrey Fire Service’s dispatch centre. The move to Surrey’s system also allowed them to adopt the Decan live move-up module, which would automatically reallocate resources in real time as incidents evolved.

Dispatch was the first key. The next key for was when Penman conducted officer development training in 2002, and the district firefighters were joined by a group of city firefighters. The ability for company officers to interact with each other in a training environment made a big impression on him.

“Doing joint officer training, doing practical scenarios with each other, having that face-to-face time with colleagues from neighbouring departments is great.”

For the past decade, the three departments have been conducting joint recruitment, with new recruits spending their first three to five weeks together in basic training with members of the other two departments. “It made a lot of sense”, says Penman, “but it was also a strong message from the three fire chiefs that this is what your career is going to look like.” The year 2016 marked the first time recruits did the whole training centre together, the intent of the three chiefs being that everyone learns to do things the same way.

Last year, when it was time for each department to revise its emergency plan, it was another opportunity for all three to work together.

This image depicts the junction of the E2 and E3 sectors just 10 minutes after arrival on scene. Kitchener Aerial 2 platform protects the exposure at the left.

“Now”, says Penman, “we have a plan that is exactly the same for all three departments. We were so used to doing things together that it wasn’t until I saw the final plan, with all three department logos on the cover, that I wondered if this had ever been done before.” The emergency plan was created by District of North Vancouver then-assistant chief Brian Hutchinson, who was also responsible for collaborating with West Vancouver and city personnel on creating the plan.

It’s been almost 20 years since the first steps were taken towards consolidating dispatch and a decade since the joint hiring and training regime began. The three chiefs talk about this as an ongoing process, with developments on a regular basis. There aren’t major events every day, but the only way they can be prepared is by working closely on a daily basis. Everybody has the same training, everybody is using the same terminology, understands what their roles are, and policies are the same.

In fact, the departments use much of the same equipment, help create a more unified mutual aid force. The Pierce Arrow XT is the truck that fills seven of the 11 frontline slots: three with the District of North Vancouver, two with the City of North Vancouver and two with West Vancouver. Each department retains their uniquely different paint scheme, but it’s another big step towards compatibility.

Below are some examples of what this level of compatibility looks like today, as a contrast to the 1990s and early 2000s before there was any thought of working together:

“Modify them slightly, improve them because our environment is changing – whether it’s new training standards or maybe new training that we weren’t required to provide before. Maybe the change in traffic patterns causes us to re-think our move-up locations or move-up strategies to provide better coverage to each other. We have to look at our training programs, when we train, where we train and the apparatus movement to and from those training exercises. It’s all key and you can’t pull that together in a few minutes.  It’s been a decade or more of really hard work.”

Three small fire departments choosing to work together proved that at the end of the day, the sum of the parts really can be greater than the whole.

Paul Dixon is a freelance photojournalist living in North Vancouver after a career in public safety communications and emergency management.