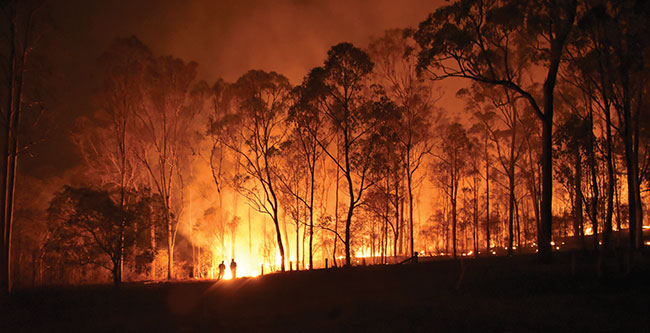 The severity of Australia’s wildfire season has brought an international conversation on the impact of climate change on wildfires to the forefront. PHOTO Credit:phillips/ iStock / Getty Images Plus /Getty Images.

Australia has been ravaged by one of the worst wildfire seasons seen in decades. To date, millions of hectares have burned and about 2,500 homes have been destroyed. A reported 34 people and an estimated billion native animals have died. The current economic cost of the fire has been estimated at AUS $4.4 billion and counting.

In early December, an official request for assistance reached the Canadian Interagency Forest Fire Centre (CIFFC), and a cohort of 21 highly trained staff from a variety of provinces were sent for a 38-day deployment to New South Wales. Since then, 239 Canadians aided in three different Australian states.

Melanie Morin, an information officer for CIFFC, returned to Canada on Jan. 20 after a 14-day deployment in Melbourne. Until recently, she explained, all of Australia’s requests had been for a specialized workforce. This included fulfilling roles in command, aviation, planning, logistics and operations.

“As an agency, we facilitate and organize wildland fire fighting resources in Canada,” said Morin. “The experts who have been deployed to Australia are all personnel who fill these roles in Canada within their own agencies during our fire season.”

At the time of publication, CIFFC had facilitated 52 personnel from British Columbia, 34 from Alberta, two from the Yukon, four from the Northwest Territories, 11 from Saskatchewan, 11 from Manitoba, 35 from Ontario, 46 from Quebec, four from Newfoundland and Labrador, 16 from New Brunswick, two from Prince Edward Island, nine from Nova Scotia and 13 personnel from Parks Canada.

When asked why certain provinces were able to provide more personnel than others, Morin explained it is all dependent on what requests have been sent, who is available at the time of the request and the individual’s qualifications. It is, as she explains, “a bit of a balancing act.”

Among the specialists chosen was Glen Burgess, a former incident commander and the current deputy fire centre manager at the Kamloops Fire Centre in British Columbia. He travelled to Australia on Dec. 22 for a five-week deployment. Stationed in New South Wales, he worked as a senior agency representative and served as a liaison between Canadian experts and Australian agencies.

“Australia has seen fires in the hundreds of thousands of hectares and if you had asked me 10 years ago, I would have said that that’s unheard of. But after 2017 and 2018 in B.C., and what we’ve seen in Alberta in the last few years, the sheer size of recent forest fires are becoming much more common worldwide,” he said.

International collaborations allow for the exchange of personnel, knowledge, skills, equipment, technology and mutual support in the event of an emergency. This isn’t the first time Canada has been called to aid in Australia’s wildfire fighting efforts. The two countries have been officially sharing firefighter resources since 2015.

The arrangement between Canadian and Australian signatories on the Exchange of Wildland Fire Management Resources was signed June 2, 2016. In 2017, almost 200 Australian fire fighting specialists arrived in Canada to assist in fighting hundreds of wildfires. Again, in 2018, Australian firefighters (alongside American, Mexican and New Zealand firefighters), came to Canada to help British Columbia fight a horrendous fire season.

Morin said the partnership between Canada and Australia has been successful, in part, because the countries have opposing summers and because the need for more experts has grown immensely as wildfire seasons have become more volatile in recent years.

On the fire ground, Burgess explained that, while wildfire fighting tactics are similar, how Australians apply these tactics is different.

“They do a lot of work off trucks,” he said. “In B.C., the crews work on the ground so, I think one of the reasons they didn’t ask for crews and why we couldn’t send crews initially was because it’s just not familiar to us.”

But, in February, the CIFFC deployed four groups of frontline firefighters as per request of the National Resource Sharing Centre in Melbourne.

“Our American counterparts sent firefighters in December and January so perhaps that need was being fulfilled at the time,” said Morin. “Their first requests from us were for overhead personnel but, as their needs increased and changed a bit, we started to send frontline firefighters.”

The four groups that deployed included a total of 79 firefighters (three cohorts of 20 and one of 19 ) — 20 from British Columbia, 39 from Quebec and 20 Atlantic-based firefighters (combined from New Brunswick, Nova Scotia and Prince Edward Island). Before deployment, CIFFC chose firefighters who fulfilled the necessary requirements. Once in Melbourne, the firefighters were then put through the appropriate safety and integration training, received their assignments and soon began working on specific incidents.

The Canadian government also organized and sent a military transport plane and about 15 additional personnel to help fight bushfires in Australia on Feb. 2. as part of Operation Renaissance, a standing mission that sends military help to other countries coping with natural disasters. The plane transported fire retardant from America and is working to aid in Australia’s airlift capacity and take images of fires from the air to measure them and predict how they might spread. (Morin noted this was facilitated independently by governments.)

Burgess, who was part of the second cohort of fire experts to deploy and has since returned to Canada, said that upon arrival into Australia, the reception — not just of Canadian experts and firefighters, but also those deployed from the United States, New Zealand and Tasmania — was “incredibly welcoming”. He said previously working with many of the same Australians in British Columbia during recent wildfire seasons also allowed for a smooth transition in aiding operations.

“The nice thing is that we actually know a lot of [the Australian experts] because, while the world is really big, the fire fighting community is really quite small. Having a pre-existing relationship with some of the people certainly makes it easier to get your feet under you,” Burgess said. “All you can do is try to figure out how you fit in to how they do things and do the best job you can.”

Editor’s note: All figures cited in this article were current when this edition went to press.