Editor Laura King interviewed Ontario Labour Minister Kevin Flynn in April, a year after the Supporting First Responders Act made PTSD a presumptive illness, and in the lead up to PTSD Awareness Month in June. 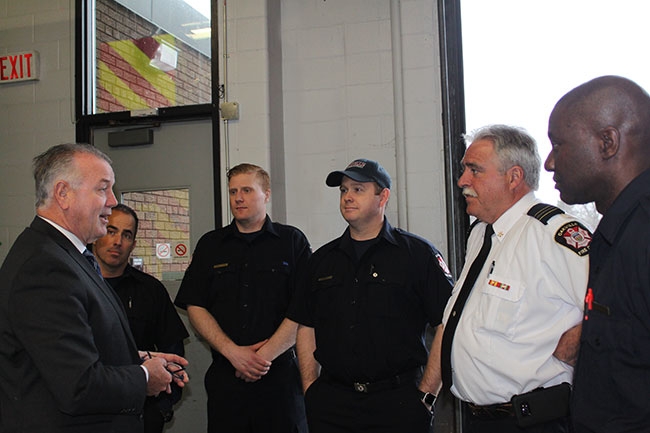 Q Mr. Minister, you met with firefighters in Oakville [April 7] and have met with police and paramedics; what are you hearing about responders and mental health?

There was a very enthusiastic response – the chiefs were there, front line officers and firefighters . . . they all said it’s a much better environment now, they’re much more comfortable to be able to talk about the issue, they’re seeing a lot more things are being discussed more openly when it comes to mental health in the workplace, and it’s being treated as it should have been all along, as just another illness, a serious illness sometimes, but I think in the past it was viewed through a lens of your moral character or your bravery, strength or courage were attached to it, and that was all wrong; but now there’s an understanding that it’s just somebody else got hurt on the job and they need the time and resources to get better. So it was really neat to have that confirmed by the people who are on the fronts lines for us every day.

The numbers that I got from the Workplace Safety and Insurance Board, they figure an additional 600 people . . . have got treatment early and appropriate treatment in a way they wouldn’t have had we not passed Bill 163.

A What we’re seeing is a mix; some people were really early off the mark; other program submissions are just arriving now, and I’ve got a good feeling that the vast majority of people will comply.

The idea wasn’t to put employers or municipalities through a lot of work, it was really facing the reality that PTSD was real, it was impacting people in a way that was often leading to very tragic events unfolding, to the point where people were taking their own lives, so we knew we needed to do something about it, and there was agreement – certainly the associations and chiefs and officers were all in support of this, the government and academia were in support of it. The Association of Municipalities of Ontario was concerned about costs and that’s part of their job, but I think they understood that they were doing the right thing by supporting this.

So when you’ve got that type of system in place, and you realize that a complete cure for post-traumatic stress disorder is continuing to elude us –  you really don’t want anybody to experience PTSD who doesn’t have to – so the prevention programs range from some pretty brief ones from smaller departments with fewer resources to some that look like they’re pretty comprehensive; it’s an information-sharing exercise that’s in the best interests of the employers.

When you recognize that there are costs associated with this, the best way to avoid those costs is to do the right thing and make sure the people who work for you don’t suffer from PTSD.

It makes sense for the firefighters themselves if they work in an environment where they know people care about them enough to have a prevention plan to help them not suffer from PTSD, that’s a great thing for them; if we prevent that from happening to individuals it obviously results in less cost to employers, and the other thing is that they can learn from each other – the smallest volunteer departments can learn from some of the most sophisticated departments, and I really am taking advantage of the competitive nature of first responders – I know they always try to outdo each other – so I’m using it to my advantage as the minister of labour trying to keep people safe; nobody’s going to have the worst PTSD prevention program; everyone’s going to want to have the best.

Q The Mental Health Commission of Canada and other groups are moving away from the terms PTSD and operational injury because so often mental illness is a combination of personal, professional and operational stress. Has that been part of the conversation?

A Certainly there’s been a change in the nomenclature to operational stress – and you know what, people asked me to do something about PTSD so if there’s no political correctness in that, to be blunt, I don’t really care; I care about the people on the front lines every day doing their jobs that I wouldn’t do in a million years to keep us safe. So these folks asked me to do something about PTSD and that’s what I continue to call it. It’s not a big priority. We know what it is and we know we need to do something about. We don’t want to get into an argument about what we call it when there’s men and women out there suffering.

Q You’ve mentioned anecdotally that responders are talking more openly about mental illness, but how do we know the presumptive legislation, the annual PTSD summits and the prevention programs will make a difference?

A [First-responder suicide] is of the statistics you don’t like to look at but you can’t ignore because certainly it’s an indicator of how bad things can get if you don’t do the right thing; I’m led to believe that the police have been tracking [suicides] and are seeing improvement, I’m not sure about fire. I think it is an indicator that if we see a decline [in suicides], and that that people are getting help that are preventing them from doing that, from taking their own lives, that’s an indicator.

The number of people that are going into treatment now that wouldn’t have in the past – there’s a normalization of the issue from a discussion perspective.

I try to go out and support first responders every chance I get; the paramedics were doing a ride to Ottawa – leaving from Dundas Square; Toronto Mayor John Tory and I were there to see them off, and I stumbled across a group of students from Fanshaw College in London who were studying to be paramedics, and I thought I’d talk to them, so I asked them what they know about PTSD and the conversation was so comfortable; they said they understand that they need to look out for each other, that it’s one of the hazards of the job, that they had covered it in class, and if they suspect something is wrong they know what to do about it. It wasn’t so much the details of the conversation, rather it was the ease with which it rolled out of their mouths, as if it was the most normal thing in the world, and it’s something they need to know. That made me think we were making some inroads. If that had been five years ago with a group of people who had been on the job for 20 years I don’t think I would have gotten the same responses.

Just being with the firefighters when I met with the Oakville Fire Department –these would have been some of the more senior guys and some of the front-line firefighters – there was almost an enthusiasm about the discussion, and I think it really is a reflections of the esteem in which we hold first responders. The fact that the Government of Ontario decided that we need to make a special case and have a stand-alone act I think makes firefighters in the province of Ontario realize that the government’s got their backs, we care about them, we value the work they do, we understand the danger they put themselves in, and when you expect people to put themselves in harm’s way the least you owe them is the treatment and to make sure it doesn’t happen in the first place.

Q There’s treatment and now prevention. What’s the next step?

The more attention you pay to something like this the more the fields of psychology and psychiatry will advance. I was proud the other day to receive an award from the Ontario Psychological Association for the work we have done on PTSD – to be shared with firefighters association, all the locals province-wide (president Rob Hyndman and past-president Carmen Santoro have been great advocates) – and the chiefs and management themselves; often there’s an adversarial aspect to that, to ideas that come forward from time to time – the chiefs have one opinion, the guys on the trucks have another – but in this case  men and women on the trucks and the chiefs were all of the same opinion, it’s time to do something serious about this and we did.

It’s kind of a fine line; as much as you want to normalize the conversation you don’t want to be complacent about it, because it’s a very serious issue that we’ve been unable to talk about in the past.

Now we’re able to talk about it I don’t want it to just become background noise; we’ve got to keep getting better at it.