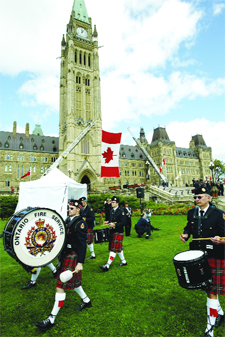 A huge Canadian flag hanging off the tall sticks of ladder trucks from Montreal and Ottawa in front of the Peace Tower formed a fitting backdrop on Parliament Hill Sept. 10 when hundreds of firefighters from across Canada gathered to honour six of their fallen colleagues at the Canadian Fallen Firefighter memorial ceremony.

It was a sunny warm day in the nation’s capital that Sunday, as a record number of firefighters turned out for the annual ceremony, produced for the third year by the Canadian Fallen Firefighters Foundation.

The ceremony got underway after a parade of approximately 500 firefighters from every province and the Northwest Territories marched from the Supreme Court grounds up Wellington Street to Parliament Hill. A guard of honour, colour party and several bands marched in the parade as well.

The honorary host of this year’s ceremony was the Service Securite Incendie de Montréal, directed by Fire Chief Serge Tremblay.

The six firefighters honoured on Sept. 10 who were lost in the line of duty in 2005 are Capt. Claude Albert Levesque, Ottawa Fire Services, Fire Fighter Kevin Brent Olson, Yellowknife Fire Department, Lieut. Cyril R. Fyfe, Yellowknife Fire Department, Fire Fighter James Peter Ratcliffe, Hudson (Que.) Fire Department, Paul Tell, Fort Nelson (B.C.) Fire Rescue and  Christopher Sullivan, La Scie (Que.) Fire Department.
A keynote address from Minister of Public Safety Stockwell Day was well received by those in attendance, and special tributes to the six firefighters who died in the line of duty in 2005 were given. The families of the fallen were also on hand to receive a fire helmet, CFFF flag and a memorial medal, in honour of their loved ones’ sacrifice.

The Canadian Fallen Firefighters Foundation (CFFF) was founded in 2003 to honour the over 825 Canadian firefighters who have died while serving their communities. Each year the CFFF holds a ceremony on Parliament Hill and provides financial assistance to the families of the fallen to attend the ceremony. For more information on the CFFF, visit www.cfff.ca. For more photos from the ceremony, visit www.firefightingin-canada.com, and click on the icon for the current issue of this magazine at the right of the screen.