Fire service leaders from across Ontario gathered at the Hilton Niagara Falls hotel Nov. 20 to 22 for the 2018 annual general meeting of the Ontario Association of Fire Chiefs (OAFC). 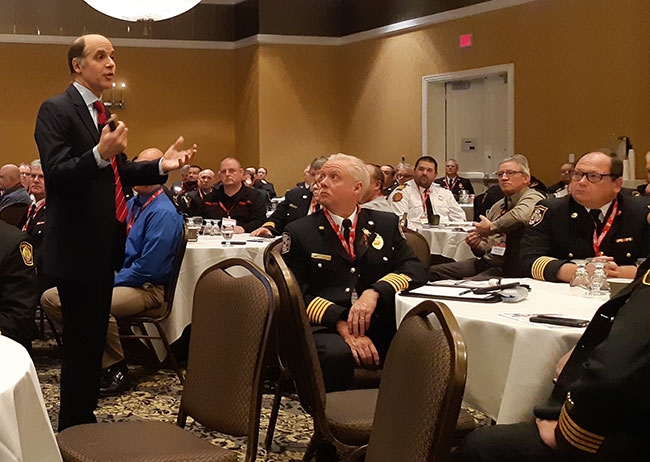 Chris Ulrich Fire service leaders from across Ontario gathered at the Hilton Niagara Falls hotel Nov. 20 to 22 for the 2018 annual general meeting of the Ontario Association of Fire Chiefs (OAFC). By Grant Cameron

The event featured meetings, speakers, educational presentations and interactive roundtable sessions that allowed operational, planning and management professionals from fire departments across the province to discuss current and emerging issues and challenges in the fire service.

Ontario Labour Minister Laurie Scott said in remarks at the meeting that the province stepped up to the plate with legislation that allows full-time firefighters to volunteer as firefighters in their communities.

“Our government is enshrining the right of full-time firefighters to work wherever they want,” she said in her speech. “Never again will our heroes be prosecuted for volunteering in their communities.”

The Restoring Trust, Transparency and Accountability Act, 2018, or Bill 57, allows full-time firefighters to volunteer on the side without being disciplined, fined or suspended. The Fire Protection and Prevention Act, 1997 had prohibited full-time firefighters from serving as volunteers, a practice known as “two-hatting” or “double-hatting.”

Scott said smaller communities simply don’t have the resources and need the legislation in place.

She noted that 60 per cent of Ontario’s firefighters are volunteers, so hundreds if not thousands of professional firefighters are double-hatting in the province, and Bill 57 will protect them from penalties.

“Ontario needs a mix of professional and volunteer firefighters. These changes mean double-hatters will not be disciplined by their association.”

Scott said fire chiefs across the province rely on double-hatters and, if eliminated, public safety would suffer.

“Bill 57 finally gives firefighters the protection they deserve. This freedom to protect freedom is compelling.”

The provincial government calculates there are 19,000 volunteers serving in 410 of 441 fire departments, meaning a full 90 per cent of Ontario’s municipalities count on volunteer responders.

She said that, in the past, there have been unreasonable delays.

“Firefighters and municipalities deserve better,” she said. “Working people should have confidence in predictable and reasonable regulations.”

Keynote speaker at the event was Chris Ulrich, a senior instructor at the Body Language Institute who trains executives and entrepreneurs on how to use body language to transform their presence.

Ulrich gave fire chiefs numerous examples of how to read body language and instantly connect with people and noted it’s important for fire chiefs to understand and pick up signs so they can build rapport and get their messages across to municipal leaders and firefighters.

For example, he noted, when a person answers a question but shrugs his or her shoulders it shows uncertainty and there is often more to the story, and when someone rubs their neck or one part of the body touches another, it’s a way of dealing with stress and an indication that more is going on.

When a person stands in the middle of a group or in a “Superman” pose with their hands on their hips it’s often a sign of power, he said, and if their hands are on their hips with one foot forward it’s usually an indication that there’s somewhere else they’d rather be.

Ulrich said it’s important for fire service leaders to be aware of such gestures because they often provide a clue into what’s really going on with a person.

The face, he said, can show seven main emotions – fear, contempt, disgust, anger, sadness, happiness and surprise, so fire service leaders can look for those when trying to build rapport with someone.

“The face will leak our emotions,” said Ulrich. “If I can spot that, I know there’s more to the story than what’s going on.”

Also at the conference: