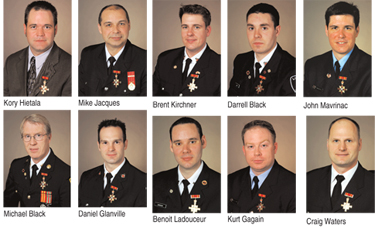 The Ontario government recognized 10 firefighters for bravery on Feb. 25, 2005, during a ceremony held at Queen’s Park in Toronto. The awards were for actions in 2003 and 2004.

The Hon. James K. Bartleman, Lieutenant Governor of Ontario, and Community Safety and Correctional Services Minister Monte Kwinter presented the awards, which are the province’s highest honour in recognition of firefighters whose actions demonstrate outstanding courage and bravery in the line of duty. Similar awards of bravery for police officers were also presented that day.

“It’s a great honour to acknowledge the bravery and courage of police officers and firefighters who put their lives at risk daily to keep our communities safe,” Kwinter said. “Ontario is a better place thanks to the dedication and heroism of our firefighters and police officers.”

The recipients of the 2003 Ontario Medal for Firefighter Bravery are Firefighter Kory Hietala and Firefighter Mike Jacques of the Brighton District Fire Department.

The Ontario Medal for Firefighter Bravery was created in 1976. The medal recognizes acts of courage and bravery.  An independent body of citizens representing all areas of Ontario determines medal recipients.

2003 recipients
Firefighter Kory Hietala
Firefighter Mike Jacques
Brighton District Fire Department
In March 2003, a Brighton man set his residence on fire and then drove his vehicle into his burning house. Shortly after, firefighters Kory Hietala and Mike Jacques entered the burning house and vehicle to rescue the driver. Despite the great risks involved, Hietala and Jacques retrieved the man and brought him out for treatment. Despite these heroic efforts, the man later succumbed to his injuries.

2004 recipients
Captain Michael Black
Firefighter Daniel Glanville
Firefighter Brent Kirchner
Firefighter Darrell Black
Firefighter Benoit Ladouceur
London Fire Department
In August 2004, the London Fire Department was asked to assist other fire services in the perilous rescue of a worker trapped in a 30-metres-high cement silo (see the January 2005 edition of Canadian Firefighter & EMS Quarterly). Captain Michael Black and firefighters Darrell Black, Dan Glanville, Brent Kirchner and Benoit Ladouceur made repeated entries into the confined space inside the silo to prepare and conduct the rescue of the trapped man.
Conditions were extremely dangerous. A slab of hardened cement dust weighing many tonnes was hanging directly over the trapped worker and rescuers. After more than 10 hours, the rescue was completed and the injured worker was raised to the top of the silo for first aid and evacuation to a local hospital.

Firefighter Kurt Gagain
Firefighter John Mavrinac
Timmins Fire Department
In April 2004, the Timmins Fire Department received notice that a man had fallen through the ice on a lake outside the city. Firefighters Kurt Gagain and John Mavrinac made a long and dangerous trek across the lake. During the last 200 metres, they encountered very thin ice and fell through on many occasions but finally located the man. Gagain and Mavrinac had to let go of their safety lines and plunge into the icy waters of the lake to rescue the man. The firefighters finally got the victim, who was suffering from severe hypothermia, and moved him back across the lake. He was transported to a local hospital where he recovered.

Acting Captain Craig Waters
Toronto Fire Services
In early April 2004, Acting Captain Craig Waters responded to a house fire in the Bloor and Bathurst area. Waters led the way into the burning house to rescue a young woman on the second floor. Braving extreme heat and heavy smoke, Waters and two other firefighters located the woman and brought her out to safety. They were able to do so because Waters, at significant risk to his personal safety, shared his air supply with the victim, which caused him to suffer from smoke inhalation. He was treated in hospital and released later that day, as was the victim.