Nov. 28, 2014, Toronto – Sixteen firefighters and six police officers from across Ontario were honoured at Queen’s Park last evening for risking their lives to save – or try to save – others. 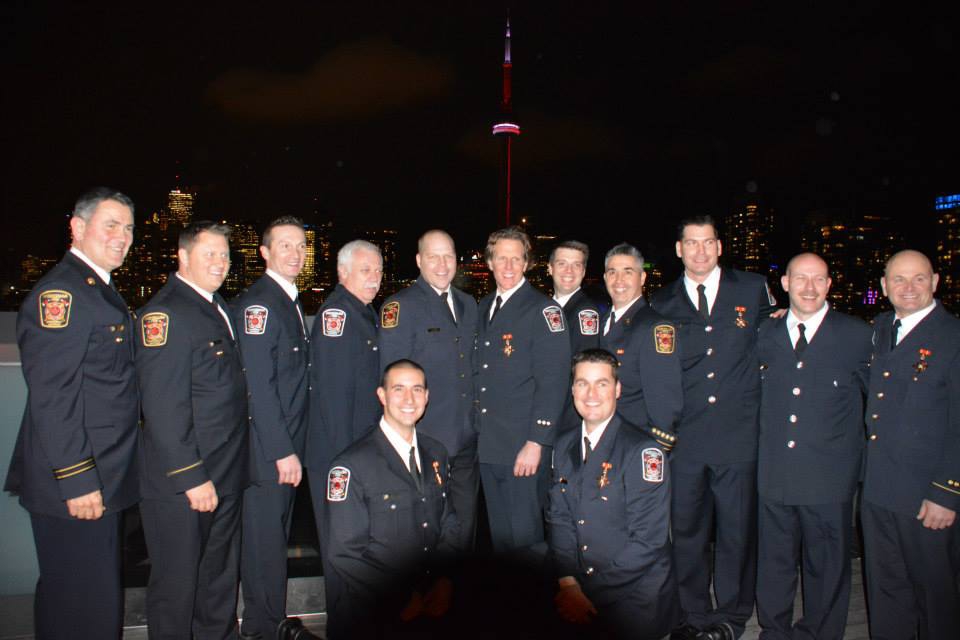 Visit our Facebook page for a full gallery of photos from the ceremony. Sixteen firefighters and six police officers from across Ontario were honoured at Queen’s Park last evening for risking their lives to save – or try to save – others.

Firefighters from Mississauga, Kenora, Elliot Lake and Shebandowan, and police officers from Niagara, Toronto and the Ontario Provincial Police were awarded medals of bravery at Queen’s Park by Lieutenant Governor Elizabeth Dowdeswell and Community Safety Minister Yasir Naqvi. (Browse a gallery of photos from the event here.)

The Ontario government announced the recipients yesterday, as it does each year in late November after vetting nominations from fire chiefs and police chiefs.

For the first time in the history of the awards, which have been presented since the mid-1970s, a firefighter and two OPP officers were honoured together for a rescue, rather than separately.

Shebandowan firefighter Ray Pilon, OPP Sgt. Hubert Beauclair and provincial Const. Doug Golding received medals for a rescue on Shebandowan Lake. (You can read more about the fire incidents and here and the police incidents here.)

Kenora firefighters Kenton Ammerman and Earl Bichon, and acting captain Terry McLeod, were recognized for saving a woman trapped in a burning house in October 2013.

Elliot Lake captains John Thomas and Ken Barnes, and firefighter Adam Vance, were awarded medals for their efforts to try to find people trapped in the rubble of the collapsed Algo Centre mall in Elliot Lake in June 2012. Other Elliot Lake firefighters will receive letters of merit.

“What nobody knew,” Naqvi said during presentation, “was the building was used for storing pesticides and other dangerous chemicals. In a split second, everything changed following an explosion powerful enough to collapse the building and blow firefighters out of the building.

“Many of the firefighters who were present that day described the scene as a war zone, with intense heat, thick green smoke obscuring visibility and flying debris.”

The missing firefighters were trapped under a cinder-block wall.

“As they worked against the clock to free their colleagues,” Naqvi said, “the fire grew faster, fragments of the roof rained down and further explosions sent debris flying through the air, sometimes hitting them. The situation was becoming untenable.”

The three firefighters were freed and moved to safety; they attended the ceremony last night, one on crutches and still moving slowly and cautiously.

Const. Jacob Smits of the Niagara Regional Police Service was nominated for the bravery award after he fell 24 metres into a gorge while trying to reach a suspect, who did not survive the fall.

Const. Bill Peterson of the Toronto Police Service saved a man from a suicide attempt on a city bridge; Const. Jeff Welsey responded with him and will receive a letter of merit.

Const. Patrick Smith of the OPP’s Upper Ottawa Valley detachment rescued a youth who had been caught in a current in the Ottawa River, and received a bravery medal last night. In an inadvertent slip that raised a few eyebrows among those unfamiliar with the incident, Naqvi said during the presentation that Smith had spent more than two minutes – rather than two hours – in the frigid water waiting for a rescue helicopter after the rescue boat had been damaged. The matter was corrected during the dinner after the ceremony, to much applause.

Sgt. Jeff Alderdice of the Toronto Police Service received his medal last evening for a 2011 incident in Afghanistan. Alderdice was serving a nine-month tour as part of an RCMP deployment when he got a message from a U.S. Army captain that police headquarters in downtown Kandahar was under attack.

Alderdice, two U.S. Army captains and their team came under fire from Taliban insurgents who were on the top floor of a nearby hotel.

Alderdice suffered permanent hearing damage after an explosion at the hotel caused by rocket-propelled grenades. His story was, perhaps, the most talked about during the post-ceremony reception and dinner.

After an evening of serious reflection and an eloquent speech, Alderdice lightened the mood a bit.