We’ve all been there. The station gong goes off and you hurry your way to the printer, the driver plots the route on the map and we take off, leaving a swinging Plymovent and four sets of shoes on the ground as the bay door closes.

En route, in the back of the engine, we look up the call details on the laptop and I start running through possible what-ifs for what will no doubt be another routine shortness-of-breath call. The run time is about 2.5 minutes and the conversation quickly changes to the weather, and whether the Jets will pull out another victory on the road.

We take the trauma bag, television, and the 02 kit and make our way up the sidewalk. I remember hearing one of the guys on the crew say we should get some fuel on the way back from this run. As I walk into this split-level house I am greeted by a young West African man sitting on the steps who says a pleasant hello. This guy is talking and breathing well, so A and B are good, I’m thinking.

As I introduce myself and reach for the patient’s wrist to take a radial pulse and start asking some questions, I turn to pull out a stethoscope from the trauma bag to start doing vitals; the man starts to cough violently. Because my body is turned down and to the right below him, I can feel his wet cough land on my left forearm.

With in seconds I start to wonder: the symptoms sound like the flu. This guy seems OK but he will need to be checked out at the hospital. The medics arrive and we load the patient onto the stretcher. The charge medic takes my report and we agree that this is not an Ebola call.

The medic starts to ask the patient some more questions, and all of the sudden the answers are different: a family member has recently travelled back home from Guinea. The patient is coughing and trying to speak; my heart starts to race as the man coughs and tries to explain that his mother has, in fact, travelled to Guinea. My mind is racing, I feel ill to my stomach, as I am now thinking about what it will mean for my family if I have to be quarantined. This can’t be happening here, in Winnipeg.

I’m afraid, nervous, and start to guard my left arm from touching anyone or anything as I listen and stare intently while the patient forms his words and tries to speak while catching his breath from coughing. The man is pleasant and co-operative, and when he finally catches his breath and slows down his speech, he tells us his mother moved back home last month, she is in Guinea now, and everyone is safe.

Fear, if only for a few seconds, can paralyze you, make your heart pound in your chest as it solicits a powerful response of emotions, actions and thoughts. Multiply this by millions and you’ve captured the collective mindset of North America since Sept. 30 when Thomas Duncan was diagnosed with Ebola Virus Disease (EVD) in Dallas after returning on Sept. 20 from Liberia. Since Duncan’s death, three other cases were brought back to North America as known cases – all aid workers – for treatment.

Ebola has infected us with a virus of fear, like no other. The graphic images of bleeding eyes, and the descriptive stories of patients hemorrhaging, lying row after row in shelter cots waiting to die in makeshift hospitals, were strewn across televisions for weeks. North Americans have called for everything from compassionate aid to militaristic controls of air space and borders. As of Nov. 3, Canada had donated more than $95 million to assist with everything from vaccine research to  humanitarian aid and personal protective equipment for health workers.

The World Health Organization (WHO) and the Centers for Disease Control (CDC) tried to assure us in September and October that they believed they have the situation under control. But for some reason, the reassurances had not quelled the constant media attention and fear that enveloped Canadian and American emergency-response agencies as department after department, and city after city, rolled out their response and training plans for EVD.

When Dallas firefighters dressed in encapsulated hazmat suits and started cleaning out the apartment of Thomas Duncan live on CNN with helicopters circling the skies above, fire departments across Canada and the United States took a collective gasp and phones started to ring; you can imagine fire chiefs receiving phone calls from their municipal leaders asking how they would handle a similar situation.

Dr. John Embil, who is the head of the Infectious disease unit of Winnipeg’s Health Sciences Centre, believes the media have overplayed the story; he says people need to understand that as of early November, the risk in North America was still miniscule.

“We really should be more concerned with the thousands who will die from influenza here at home,” Embil said in an interview. “Albeit, I see how the fear perpetuates when the mortality rates in Africa are 70 to 100 per cent in certain areas. The issue is understanding that the disease process in West Africa is working in a perfect storm of transmission. The risk here, compared to there, is very different, and while there are still unknowns as in how the [Dallas] nurses got sick, from a risk point of view it is exceptionally low.”

Closer to home in Winnipeg at the National Microbiology Laboratory – Canada’s only top Level-4 containment laboratory for handing diseases such as Ebola – work to prepare for possible outbreaks on home soil has been going on since the WHO started to declare Ebola a threat to world health back in August. Back then, no one in Canada was concerned, as most felt Ebola was someone else’s problem, until it landed in Dallas, pretty much on our doorstep.

Specialists in Winnipeg have been dealing with this outbreak for months; scientists from the national lab have regularly travelled to Africa’s outbreak regions to work and study, with detailed plans in place to deal with the returning scientists who have had possible exposures to the disease.

Dr. Rob Grierson, who is the medical director for the Winnipeg Fire Paramedic Service and an emergency-room physician by trade, believes the city and most of the country is prepared well.

“We’ve had plans in place in Winnipeg since the summertime, when scientists from our national virology lab started coming back from those affected areas,” Grierson said.

“We had to make sure safeguards were in place to protect them and the citizens, as well as their families. Now that there have been confirmed cases in North America, we’ve trained and tested our policies and were confident we are doing all we can do with what we know.

“I can’t speak for the rest of the country but I know my counterparts across the nation are in meetings and briefing sessions and we’re all taking a collaborative effort to do the absolute best we can.”

Those plans are, of course, the best-case scenario, but there are so many variables that can interfere with those protocols: the subjective nature of the incubation period of EVD of two to 21 days; the upcoming flu season; and the fact that infrastructure and policy development has thus far been reactive given that the WHO does not have one universal policy for dealing with many issues such as PPE and transport of infected individuals, and jurisdictional laws that can or cannot force a person into quarantine. The what if questions that firefighters love to ask have been flying around, and the lack of answers is forcing departments to spending money on whatever they can get their hands on to protect their workers. All you have to do is look at Twitter and Facebook to see how many different ways department are training and preparing.

Grierson couldn’t quantify how low the risk really is, but he provides crystal-clear data from Winnipeg’s 911 centre. Between the time the centre started screening calls for possible EVD cases and early November, there had been 4,439 calls to 911, with 1,427 highlighted for flu-like symptoms. Of the calls for flu-like symptoms, eight patients indicated a possible travel history to West Africa, or contact with a person who had possibly been there. After further consultation, none of the calls warranted enacting EVD procedures.

“If it does happen, where a suspected EVD case is present,” Grierson said, “we believe our plan is a good one and with the infrastructure of our hospital system our mortality rates should be significantly lower due to basic medical principles of keeping patients hydrated via IV fluids, using proper isolation rooms, supportive care, and mitigating blood pressure issues.”

Winnipeg has room for 10 EVD patients; like fire departments, hospitals are charged with planning for the worst.

Grierson believes the lack of infrastructure in the affected West African countries – primarily Liberia, Sierra Leone, and Guinea – is the major factor contributing to high mortality rates there.

“The hospitals are isolating all Ebola patients in the same ward or area,” he said, “when best-case practices would have each patient completely isolated.”

Dr. Renate Singh, who is the associate medical director of Manitoba Air Ambulance, says she believes EVD planning has been comprehensive and has included  many stakeholders.

Singh says there are challenges associated with moving an EVD patient in a fixed-wing or rotary aircraft.

“The PPE the CDC is recommending is for exposures of approximately an hour, so flying a patient in a small, enclosed space for several hours in close proximity to responders is an issue.

“Everyone is working well together to come up with plans and processes but the reality is there is know 100-per-cent way to remove the risk, and so many scenarios that have to be planned for.”

While Canada has donated millions in relief funds, it wasn’t until EVD landed in North America that governments started to take the threat seriously.

According to The Globe and Mail, while Sierra Leone was in dire need of medical gloves and masks as the outbreak started to escalate in June, the federal government, through Health Canada, was selling these items at rock-bottom auction prices to those who then turned around and re-sold them for incredible profits to aid agencies that were trying to get the needed PPE to responders in Africa. The needed items were considered surplus in Canada and were put up for auction; eventually – once the government was made aware – the process was stopped.

Firefighters do what we do, because there is an attraction to the unknown and risks that have a chance of making a difference in someone else’s life; it does not matter what the hazard is, or how dire the situation.

The fear I felt for a mere 15 seconds was real, but it was dissolved by common sense and information. When I asked all three physicians interviewed for this story what firefighters could do to reduce their risks, they all said the same thing: follow your training and policies, learn how to use the PPE you are given, and don’t be afraid to ask questions and learn as much as you can.

Oh, and Dr. Embil says wash your hands and get the flu shot, because if we can go inside a burning building then we can certainly handle the fear of a little tiny needle. 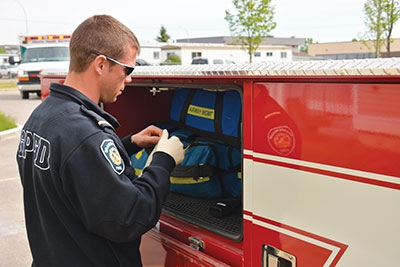 The best advice for firefighters responding to potential Ebola calls is to properly use assigned PPE We’ve all been there. The station gong goes off and you hurry your way to the printer
Print this page