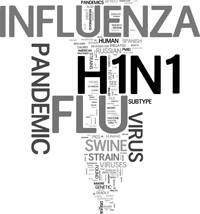 Nov. 6, 2009 – For months, fire departments across Canada have taken the H1N1 threat seriously and developed plans, procedures and supply strategies to cope with potential worst-case scenarios.

“We have a pandemic response plan which escalates our response activities as the risk goes up,” said Dave Meldrum, divisional chief of Halifax Regional Fire & Emergency’s
safety division.

“Right now, we are at a relatively low alert level but if the disease becomes more widespread and/or more lethal, some of the additional measures we can take include restrictions on the type of calls we respond to – no Influenza-like illness (ILI) medical calls, for example – restrictions on meetings and training events, lock down of our stations to prevent entry of any persons other than working firefighters, and pre-entry symptom screening of firefighters
before they are allowed to start duty.”

Dan Heney, deputy chief with Prince Albert Fire & Emergency Services in Saskatchewan said all risks of this magnitude are handled similarly: educate on the potentials and establish contingency plans for the worst.

“Health professionals have suggested all hazards pandemic plans be generated for sometime now, but legislators seemed to only advocate planning for specific events,” he said.

In some instances, departments were able to draw on past planning to prepare for H1N1. “We had to do all of this before for SARS in 2003,” says Joe Kowal, the Winnipeg Fire Paramedic Service’s emergency medical services liaison with the regional health authority.

“Although we were fortunate in not having to deal with SARS like our Toronto colleagues had to, the thinking that went into the SARS plan works equally well for coping with H1N1.”

H1N1 plans run the gamut from educating firefighters to protect themselves against infection and minimizing exposure to infected patients to deciding what supplies need to be available on trucks and in stations.

In the case of the Fredericton Fire Department in New Brunswick, pandemic planning goes beyond prevention and protection to an investigation to determine how to keep the department running on reduced strength. FDD also examined how its personnel might be cross trained to help with other city services, said Assistant Deputy Chief Paul Fleming of the department’s prevention and investigation division.

“This could include personnel with heavy equipment licenses, experience with chain saws and so forth,” he said.

“We are telling our staff to follow the universal precautions for protecting themselves from infection, such as hand washing and using proper masks, gloves and gowns when responding to potential infection calls,” he said. “We are also teaching them to know what the symptoms of H1N1 are, and that they should stay home should they show any of these symptoms personally.”

“It goes through the dos, don’ts and best practices for dealing with H1N1, and viewing it is a required part of each employee’s training regime.”

In Winnipeg, the city has created a website on its intranet where information is shared with staff, said Randy Hull, Winnipeg’s emergency preparedness co-ordinator.

“We have 10 separate H1N1 bulletins posted for staff. We have also held refresher courses on the proper usage and deployment of respirator masks and gloves.”

With 84 halls and 3,000-plus employees, Toronto Fire Services can’t address the H1N1 challenge by having “a tailgate education program,” said Capt. Tim Metcalfe, an occupational health and safety officer. So the department has sent out information through its regular fire chief communiqués via the TFS intranet.

“They talk about ways of protecting yourself and include fact sheets about immunization and H1N1. Our union is also posting information on their website.”

After education, sanitization is the next step in the fight against H1N1.

Properly fitted N95 respirators, protective gloves and gowns for use in ILI situations have become standard equipment at many Canadian fire departments, in their stations and on their apparatus.

“Our people already are equipped with these items on their trucks,” said Brent Denny, deputy chief of volunteers for the Cape Breton Regional Fire Service, which oversees 33 fire departments – three professional, three professional/volunteer and the rest volunteer.

“Meanwhile, we have added an extra layer of protection by having our emergency health service dispatchers ask callers whether people have flu-like symptoms in their households. This allows us to give our people advance warning when they may be entering ILI situations.”

Toronto Fire Services’ dispatchers also alert its officers about possible exposure risks during calls. When a risk is present, TFS personnel follow routine precautions for dealing with infectious diseases, says Capt. Metcalfe. This means wearing bunker gear and boots, eye protection, protective nitro gloves and fitted N95 respiratory masks. The department does have gowns in stock, “but we haven’t received direction from the base hospital to start wearing gowns,” he said.

Canadian fire departments appear united in their attitudes towards H1N1 vaccinations: they want personnel to get vaccinated but they want the decision to be voluntary. The hope is that education will motivate firefighters to get the H1N1 shots.

“Our people are being strongly encouraged to get the H1N1 shot,” said Edmonton’s Dale McLean.

In Prince Albert, emergency responders were on the region’s priority list, said Dan Heney. “When our priority level is reached, we will be vaccinated.”

Toronto Fire Services also took the voluntary vaccination approach, but in an effort to save time it brought vaccination clinics directly to firefighters. “The immunizations are being performed by EMS paramedics and Toronto Public Health nurses,” said Capt. Metcalfe. The program was part of a city-wide effort to protect tier-one workers, including public safety officers and workers at seniors’ homes.

At press time it was unclear how severe the H1N1 infection would be. Regardless, the more people who get sick, the higher the danger to firefighters of exposure to H1N1 at work and at home. The real danger was that substantial numbers of firefighters could be lost to duty due to sickness, reducing departments’ ability to cope with daily duties.

Editor’s note: Research for this story was done in mid- October, before the H1N1 virus began to spread in late October.