A partnership between Regina Fire & Protective Services and a family-advocacy agency has helped to reduce the number of child-caused fires in the city. 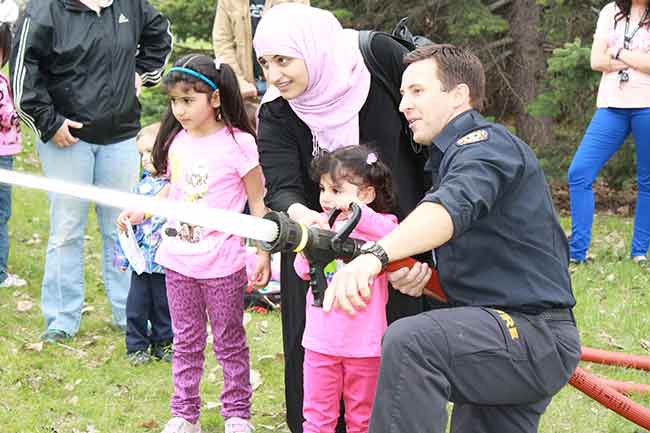 A group called KidsFirst Regina approached Regina Fire more than 10 years ago to see if the two agencies could partner in their public-education efforts. KidsFirst is a community organization that provides voluntary services to families with young children.

Angela Prawzick, a public education officer with Regina Fire, said working with a community-based organization that is trusted by its clients is the ideal way for the department to reach an at-risk population.

“The partnership with KidsFirst,” Prawzick said, “provided Regina Fire with the opportunity to extend its outreach to the community far more effectively than would have been possible working alone.

“Not only did we reach our goal in reducing child-caused fires,” she said, “but we’ve seen an overall drop in all unintentional fires.”

Executing the plan
In the early 2000s, children playing with matches or lighters was the leading cause of fires in Regina. The majority of these fires occurred in neighbourhoods that are the focus of KidsFirst’s programming.

“Fire had been a huge concern in the neighbourhoods that we work in for many years,” Fisher-Phillips said. “But that particular fire was a fatality so it really caught everybody’s attention.”

Not long into discussions between Fisher-Phillips and department staff in charge of public education, a partnership was formed with the goal of reducing unintentional fires by targeting at-risk families.

Discussion eventually yielded a working group of eight members: two from Regina Fire – Prawzick and her colleague Candace Liskowich – and six from KidsFirst and its partnering organizations.

The first step for the group, Prawzick said, was to set objectives: decrease the number of child-caused fires, motivate and support KidsFirst staff in providing fire-safety education to their family clients, and empower families to take a proactive role in their own fire safety.

The working group then set out to create unique fire-safety resources and tools for KidsFirst staff members to pass on to parents, such as activity books, stickers, videos and games.

A training workshop was designed to introduce staff to the tools and give them an overview of fire hazards and risks in Regina, specifically risks for child-caused fires, and a crash course on fire safety.

“Through the home visitation program,” she said, “KidsFirst staff members work with families in their homes – usually once or twice a week – to strengthen child growth and development, enhance positive-parenting skills and improve housing and life safety.”

During home visits KidsFirst staff typically go through a home-safety checklist to point out risks such as mold, leaking water, working appliances and safety in the neighbourhood. With the integration of the fire-safety mandate, the checklist also includes the importance of regular smoke-alarm checks and developing a family fire-escape plan.

During other family visits, staff may discuss nutrition and its impact on child development. During the discussion, the visitor slips in tips about cooking fire safety, such as the importance of staying in the kitchen when cooking, keeping the stovetop clear of combustible materials and keeping a child-free zone around the stove.

“Home visitors also use teachable moments,” Sinclair-Birns said. “If they see a lighter left on the table, they will use that opportunity to suggest a safer place to keep that lighter.”

It’s through these interactions, she said, that families see the benefits of fire safety and how it empowers them to keep their families safe. This learning can be passed on to future generations in the family.

“The stories of real fires in Regina – one of the tools developed for the home visitors – really hits home with the families,” Sinclair-Birns said. “They can relate to these fires, some of which have occurred in their own community.”

Families are signed up for the home-visitation program for up to five years; during that time, Sinclair-Birns said, the home visitors build strong relationships with their families.

Those relationships, Liskowich said, are invaluable to Regina Fire.

“The relationship that KidsFirst has with these families is irreplaceable,” she said. “They trust them, they know that they are looking out for their best interests.”

Regina Fire & Protective Services and KidsFirst Regina jointly host a fire-safety carnival and picnic at the fire station. The event

Finding partners
KidsFirst Regina is administered through a provincial health authority – the Regina Qu’Appelle Health Region. The KidsFirst program is a joint initiative of provincial departments and community agencies, and funded through the federal government.

Fisher-Phillips said similar programming exists in all other provinces and territories, and often includes home visitation.

“Home visiting is becoming a common form of providing services across Canada,” Fisher-Phillips said. “Our partnership has worked very well because both the fire service and KidsFirst were very interested in it, but absolutely any program can share fire prevention or some kind of fire information through home visiting.”

Even if a health organization doesn’t use home visitations, she said, fire messaging can be integrated into almost all programs that are reaching youth and families.

“Lots of health programs do community fairs where they bring resources out and the community comes out and meets them and learns about what they do – things like health fairs, teddy bear picnics, those kids of things,” Fisher-Phillips said.

Evaluating the partnership
Both KidsFirst Regina and Regina Fire & Protective Services are committed to continuing the program indefinitely. Fire safety was formally integrated into KidsFirst’s curriculum in 2010 and is updated yearly to reflect new messaging from the department, such as that year’s Fire Prevention Week theme.

In addition to the home visitation +program, the working group designed support activities to reach an even wider audience of families. Twice a year the agencies work together to throw a fire-safety carnival and picnic held at the fire station. Surveys completed by families who attend the fire-safety carnival indicate that their fire-safety knowledge is above that of the general population.

“These families knew when they last tested their smoke alarms, and they knew why,” Liskowich said. “And they had a fire-escape plan because their home visitor did one with them. It was pretty remarkable.”

According to the surveys, the families are also practising stop, drop and roll, and playing games such as pretending there is a fire in order to practise their escape plan.

Liskowich said three or four years into the program they compared results from the KidsFirst survey to a similar survey handed out at a public Fire Prevention Week event.

“We tabulated the answers and found the KidsFirst families know way more than the public,” she said. “We now know that fire safety is being introduced into the most vulnerable fire risk population that we have in our city.”

Now, more than 10 years into the partnership, Liskowich said there is a level of trust and familiarity among the department members, KidsFirst staff and the families. Ultimately, she said, that trust has substantially increased life safety for Regina’s most vulnerable residents.

“It went above and beyond our expectations,” Liskowich said.