“So, how many volunteers do you have on your department?” the helpful traveler asked. He had been doing first aid when we arrived at the single vehicle crash.

The patients were loaded and the ambulance drove off. I thanked the traveler for his help, and he got into his car.

“Try to make it out of our response area before you crash,” I imagined myself telling him as he drove off through the blizzard. We didn’t need any more calls that day.

So, what do we do about staffing problems in small, volunteer departments?

I know about the guidelines and standards out there – ten in ten, NFPA 1710, 1720 etc.  Historically, Upsala’s responses are something like ten-twenty-ten. That is, only ten calls in the past twenty years had ten or more firefighters respond.

OK, I didn’t actually count, so that might be exaggerating the problem a little, but here’s a hard fact: one-third of our responses in 2007 had a turnout of two or three firefighters. I don’t need a standard to tell me that’s not good, but is there a remedy?

I know of a small village in Japan that had a simple recruiting plan: every able-bodied man in the village was a volunteer firefighter. No excuses. Public expectations weren’t very high, but when warm bodies were needed on a hose line, they had them. It worked well because of Japanese culture. If society says jump, you jump as high as you can.

I read about another model in a town in Germany that had a “volunteer” garbage collection force. All the men took shifts operating municipal trucks, saving tax dollars and giving everyone a sense of community pride. The time commitment wasn’t large, because the workload was spread around evenly. I couldn’t find any current information on this, but I get a warm, fuzzy feeling just thinking about it.

The South Koreans really take recruiting seriously, at least when it comes to the army. Everyone is required to serve two years when they come of age. After that, they receive annual refresher training. If someone doesn’t like it, they go to jail.

Here in Upsala I may have to resort to drastic measures. Donning my black Nomex hood, I take two firefighters and storm the local coffee shop, armed with Super Soaker squirt guns. The room falls silent. “All right, hands up and backs to the wall!” I order, waving everyone to the side of the room. “When Pete and Harry come around with the recruitment forms, sign on the dotted line, and nobody gets wet.”

My henchmen secure the exits and obtain the signatures. In four minutes the operation is complete, and we clear the scene. The ranks have been filled once again, thanks to sound strategy and a little effort.

As we squeal out of the parking lot, Pete clears his throat. “Uh, chief . . . you know we’ll have to do this again tonight, or they’ll never show up for training.” There’s always a wet blanket in the crowd. But I guess he has a point. People might catch on and start bringing their own squirt guns to the coffee shop.

So, what is the solution? I think we need a cultural adjustment. In very small communities, volunteering will have to be viewed as a social duty, rather than an extracurricular activity, if we are going to survive. I can see the scenario now. The Jones kids dishing Japanese style peer-pressure to the Smith kids: “We won’t play with you anymore because your dad and mom haven’t been to training for a month.”

Or how about some positive influence through a well-funded media campaign. Maybe a TV commercial, showing Brad Pitt and Angelina Jolie in turnout gear, driving a Lamborghini. The catch phrase? “Social responsibility has its rewards.”

Kidding aside, television has been used to shape our culture since its invention. The increase and decline of smoking is an indication of that. However, Upsala can’t afford to spend its whole budget on a 90-second commercial. We need serious help, and so do dozens of other communities.  If all else fails, legislative help might be the only way. After all, who could argue with a law that said volunteer or go to jail? At least until the next election . . .

For now, I’ll just have to stick with asking pretty-please-with-sugar-on-top will you join the #@!*$% fire department!

Some men see things as they are and ask why. Others dream of things that never were and ask why not. –George Bernard Shaw 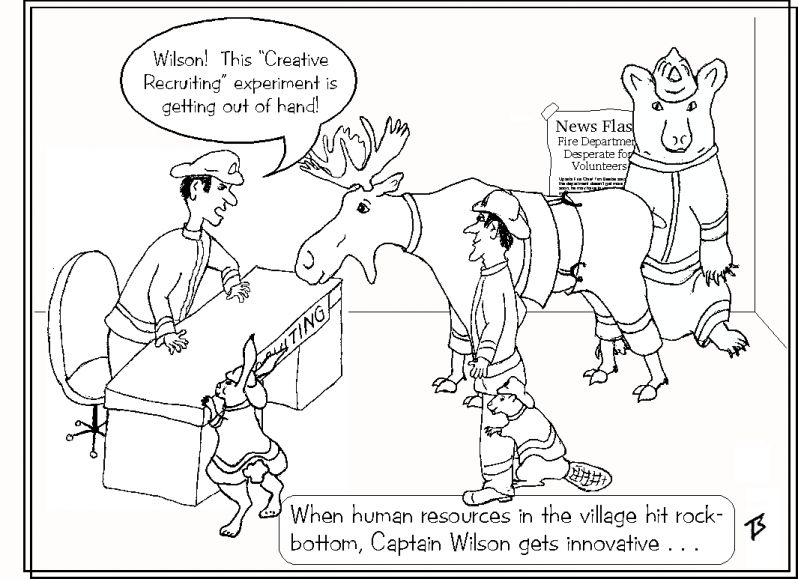