May 2016 - A few years ago I received a mass email from our regional Alberta Emergency Management Agency field officer asking if our community, the Lesser Slave Lake Region, was interested in participating in a province-wide emergency management exercise. After four years of constant rebuilding, repairing and reimagining our emergency services after the 2011 wildfire decimated our region, I thought: “Yes, we absolutely have to do this.” (I should have maybe asked around before sending a positive response . . .) 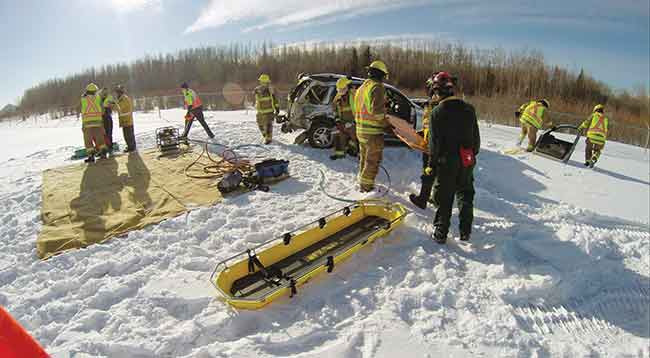 Everything sounded pretty good, and we sent in our inputs to the agency. Unfortunately, it quickly became apparent that our region would get a small, if any, role in the province-wide exercise. So instead our region held its own 48-hour emergency management exercise.

Lesser Slave has a regional protective-services group that is part of our emergency-management committee and I went straight to these 23 organizations to ask for their participation. This committee had been revitalized after the 2011 fire, and we are very active; they all agreed and the planning started in early 2014.

The key to success for us was going to be running our emergency-operations centre (EOC) for up to 48 hours straight, teaching all the participants valuable hands-on lessons while also keeping our boots-on-the-ground responders busy – no easy feat, but what could go wrong?

We began in early January 2014 with site selection (our local live-fire training area), EOC selection (local fire hall in Slave Lake), and a small budget from council ($4,000). Then came dozens and dozens of meetings with stakeholders, administrations and councils. Things still looked good so we pressed on and the exercise began to take shape, but the magnitude of the exercise had yet to be determined. Fire staff looked at our capabilities and workload, and decided that the exercise and the valuable training it would provide were too important to let go. The decision was made to involve everyone who wanted to participate; at the levels they chose. (This turned out to be a huge event for the fire department, but we enjoyed every minute.) The event was planned for February 2015 as such:

As the weeks passed, fire crews went about their daily business, but spent every spare second working on the emergency-management exercise. Crews set up all the hands-on simulations, and I handled all the meetings for agency inputs, disaster committees, EOC and training. Participation by the two local schools involved three weeks of first-aid training, including signs and symptoms. During the exercise, students chose their injuries, made acting notes, and worked with our local makeup artist to display the proper effects.

Most agencies were nervous to participate at first, but once they found out that we would try to simulate whatever they needed, things continued to get very interesting. Each agency listed its training wants, and assisted in supplying the inputs necessary to add that training to the exercise. As the day of the exercise drew near, we became swamped with the setup, training and hands-on work.

The first morning began as expected; we called in staff and had the director of emergency management (DEM) fill in his organization chart. As groups arrived at the EOC we handed the DEM his first input sheets. We were off and running. Every agency was represented with more than 50 people packed into the EOC. Our newly printed (2013) REMP was used and followed the incident command system (ICS) model. Some participants had never used the model before, but most overcame their nervousness during the setup.

Just after 10 a.m., we directed crews to respond to a simulated medivac aircraft crash with six people on board. The airport crew did a great job planning, setting up, and running the exercise and live crews rescued all patients.

By afternoon the participants really started to role play and made many decisions. Our trainers (brought over from Alberta Environment Sustainable Resource Department) were incredible, and everyone involved learned something new from them. At 4:30 p.m. we shut down the simulation for the day, and planned what would happen through the night in preparation for the incoming EOC team at 8 a.m. This planning session was great and involved more than 20 people pouring over the day’s inputs, plans, and EOC work.

The second morning began with a new DEM at the helm, who filled in his team. Inputs left from Day 1 were prioritized and new inputs were quickly put into the exercise. At about 10:30 a.m. the EOC sent out a full callout of all emergency response agencies; 26 students were trapped in a simulated collapsed building at our live-fire centre. The scene was very realistic due to all the prep work from all the agencies.

Dozens of units from fire, search and rescue, EMS, RCMP, commercial vehicle enforcement, Alberta Environment and Parks, Alberta Health Services, municipal district operations, town operations, ATCO Electric, ATCO Gas, and 20 EMT and EMR students from the local college all descended on the live-fire grounds. A command team was established and the scenario was tackled; make utilities safe, locate students, extricate, triage, treat, transport, account for all, triage at the hospital and move to treatment areas. It was amazing to see all of these organizations testing all of their skills in so many ways.

A lot of unique aspects of emergency management were tested including our search-and-rescue dog, Navi, and handler Wade, a Code Orange (mass casualty) at our hospital, and the relationship between our local emergency medical students and our emergency medical responders.

All in all, it was an amazing event, which unfortunately also included two no-duff situations, which were handled in -14 C with a windchill of -24 C. Crews did a remarkable job, and the learning was constant and staggering. During all of this our EOC assisted with the live exercise and continued with all of its inputs. At one point I watched as the EOC members paired an RCMP driver with a fire truck to pick up patients for EMS at scene. If that doesn’t prove working together works I’m not quite sure what would.

The EOC, press conferences, public updates, and real crews worked throughout the day and by 4 p.m. we ended the exercise and held a quick debrief. This experience, I can honestly say, was a highlight in my career. So many people came together and gave their time, knowledge, and hearts to a single exercise; it will always remind me that to succeed we must believe in a system that is so much bigger than any one person or organization. We must continue to find new ways to work together while continuing the tried-and-true efforts of all of those before us. The following are some of the lessons learned, but please know that the success of this exercise was the greatest gift of all.